Weeks before my trip, I was still undecided between a one-day or three-day pass for my Angkor Wat tour. Covering all temples and all landmarks within the Angkor Archaeological Park was the original plan. “A day is not enough“, told by friends who’ve been to the UNESCO World Heritage site. On the other hand, three days are too much for the entire tour. Considering the price of the passes, I settled for a day on the temples that include the famous Angkor Wat.

Mad Monkey Hostel has affiliate tuk-tuk drivers and they usually stay near the entrance of the hostel. Three Cambodians approached me the moment I got out of the hostel’s compound. They speak English quite well and it was an easy time making a deal with them. The first offer was given to me, 20USD for an entire day at the archaeological park. The rates I read online prior to my visit range from 10USD to 15USD. I declined the offers but they were pushy to follow and continue convincing me that 20USD is the regular rate.

I mentioned that I can only pay 15USD for an entire day of exploring the temples. He sealed the deal, “Ok my friend, 15 dollars one day”. We immediately hopped on his vehicle and went straight to the ticketing hub for me to buy a pass. If you’ll arrive early afternoon in Siem Reap, it’s better to head straight to the ticket office so you can directly go to the park for your sunrise viewing the next day. Buying a ticket is very efficient that I was able to get mine in just 2 minutes. I immediately returned to my tuk-tuk driver and we blazed the road to the Angkor Wat Temple for the much-awaited sunrise.

I immediately sashayed a hundred steps to the Angkor Wat’s main entrance. But the horde of people getting down from the tourist buses like a zombie apocalypse discouraged me to enter the complex. With that, I settled myself near the moat and joined the backpackers lounging on the bleachers. The view inside Angkor Wat is more stunning than my current view but moving away from the throng of tourists is better. It’s just the same sunrise, by the way. 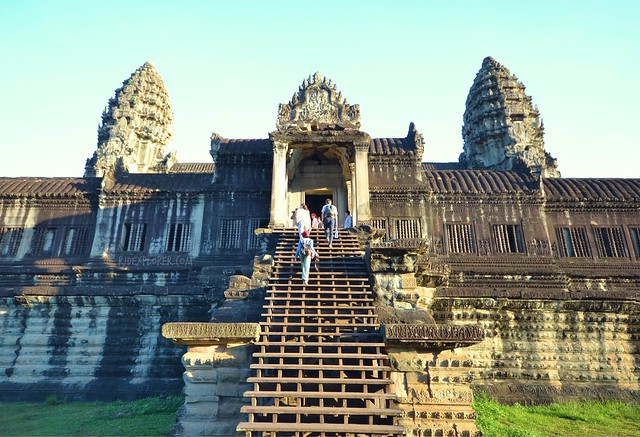 When the sun totally brightened the entire complex, people started to leave and proceed to the next one. Other people went directly to a queue going up on one of the stupas. I, on the other hand, roamed around the rubbles and searched a spot where I could take photos without the worry of including a single tourist on my camera’s frame.

The experience of walking inside the Angkor Wat brought goosebumps and I still couldn’t believe that I’m finally realizing walking around it. Detailed etchings on walls will make you stop and just stare and scrutinize its intricacies. Collapsed columns and blocks are visible on some parts with woods and metal bars used to support the ruins. Before leaving the complex, don’t forget to drop by the Bas Relief Gallery with inscriptions engraved to commemorate a series of historical events from the reign of King Suryavarman II, the founder of Angkor Wat in the 12th century.

Before Angkor Thom’s southern gate is Baksei Cham Krong, a small Hindu temple few meters from the road. My driver was puzzled when I told him to stop. Maybe the temple is not a usual stop for tourists exploring the huge complex. I said I’ll be only taking some photos and no intentions to climb. Later on, I found out that the translation of the temple’s name means  “The Bird Who Shelters Under Its Wings”. It’s more of a pyramid having a tower on its top.

One of the most decorated structures in the Angkor Archaeological Park is the Bayon Temple inside the Angkor Thom complex. The major difference of the temple to the others are the smiling faces engraved on most of its towers. The wooden stairs on numerous areas of the temple allow guests to explore its interiors. Once you get yourself in the upper terrace, you can follow the track around the central tower and marvel on the smaller towers having a multitude of faces. Few meters from the main temple are smaller structures once served as libraries.

Around noon when we left the Angkor Thom complex and continued to the next ones. Northeast of Angkor Thom is Preah Khan temple, literally, means ‘royal sword’. It has 2 main entrances, tuk-tuk drivers usually drop tourists on the west gate and wait for you on the other side. On my case, my tuk-tuk driver decided to park on the east side allowing me to go back to the east entrance that I used to enter the temple. Compared to the other temples in the entire UNESCO World Heritage site, Preah Khan is the largest temple with a flat design.

Adjacent to Preah Khan, in the middle of Jayatataka Baray, is Neak Pean, or “the entwined serpent”. A wooden boardwalk connects the artificial island to the main road. The stillness of the water perfectly reflects everything above it and produces a magnificent view. At the center of the main pond is a sanctuary while four smaller ponds on each side are chapels. These mini ponds, namely elephant, bull, horse, and lion, represent water, earth, fire, and wind as the elements of balance in Hindu beliefs.

Last in that area is Ta Som Temple. Ta Som Temple has three enclosures with gateways called gopuras. One of the gates also bears the Bayon faces on its towers while another one strangled by a fig tree. The central shrine is decorated with intricate carvings. Near the temple are some local artists selling their paintings, showing the beautiful temples, to tourists.

On the eastern side of the Angkor Archaeological Park are the East Mebon and Pre Rup Temples. If you’ll trace the location of the structure on the archaeological park, it is on the same axis opposite of Phimeanakas on the west side. East Mebon has two enclosing walls and three tiers with the central tower on the uppermost platform. Several smaller towers surround the main tower.

Same axis with East Mebon on the north axis is Pre Rup. Compared to East Mebon, Pre Rup is higher in elevation but is just similar to the first. The walls on the south side are reddish in color. Some restorations were ongoing during my visit to Pre Rup with the presence of metal scaffolds. Before continuing to one of the most visited temples, Ta Prohm, your tuk-tuk will pass by Srah Srang, a water reservoir on the east side of the heritage site.

As I’ve mentioned, Ta Prohm is one of the most visited temples in the Angkor Archaeological Complex. Apart from the movie Tomb Raider, with most of the scenes shot at the structure, the large trees growing out from the ruins make it a topmost location for tourists. Near the entrance is the tree entwining one of the segments of the temple. Tourists create a queue to take a photo with the sky-towering tree. Massive restorations were visible with most columns of the ruins being supported by metal bars. There are also trail recommendations and reminders for tourists not to go and climb some parts of the ruins.

Enter the complex via the east gate in a gopura having the Bayon-signature smiling faces. Square pillars welcomed me upon entering the main enclosure of Banteay Kdei Temple. Literal translation of the temple’s name is ‘a citadel of chambers’. Knowing that it was the last temple that day, I already felt temple fatigue the moment I was on my way back to my tuk-tuk service. In reality, it was not the last one because my tuk-tuk driver made a short stop to Prasat Kravan, having five reddish brick towers.

TRAVEL TIP: After visiting all the temples on the Grand Circuit, go back to Angkor Wat complex to take a picture of the main structure with the image being reflected by the water on its side. I forgot to ask my driver to go back so I missed taking a picture similar to the one below by Jerry Lou.

By the way, tuk-tuk drivers offer 2 different tours; the small circuit and the grand circuit. The one I did is the grand circuit and got a deal worth 15USD for a tuk-tuk service from sunrise up til three in the afternoon. Angkor Archaeological Park updated the entrance fees starting February 1 to 37USD (1-day), 62USD (3-day), and 72USD for a week pass. I was hesitant to do a day tour around the Angkor Archaeological Park yet I was able to cover most temples in the complex. But I tell you, temple fatigue is real!