We were on the comforts of our beds and just had a refreshing shower that implies a too-lazy-to-go-out syndrome. But everyone was starving as we haven’t had a decent meal that day except for a pancake breakfast meal at a food chain upon our early arrival in the Dumaguete from Cebu. No one expressed a violent reaction when someone posted a suggestion to visit the famous boulevard.

On a tricycle to the bay walk, one member of the group exclaimed ‘Sunset!’ I was puzzled because it was already 7:30PM and I know for sure that visiting Dumaguete City won’t bring me to a different time zone. So I shifted my view to the sea side, moon rise. I can’t believe my eyes, the moon, in its full size, slowly peeks out on the dim horizon. On my bewilderment, it was too late to capture a shot of the wonderful episode.

The tricycle driver dropped us in the so-called tempura country with some of the vendors still setting-up their kiosks. Not that far from the crowd is the illuminated I Love Dumaguete sign. With just the tempura, and some street food like fishballs, kikiams, and balut, majority of the group insisted to find a place with a wider array of options.

With his direction, a local led us to IsdaBest located in one of the side streets of Rizal Boulevard. It was the first and only place we have checked and didn’t bother to find another one. The restaurant has the pay as you order style where in you need to queue, select from the pseudo buffet spread or at the for-grilling section, and pay your order.

For dinner, I paid Php 122 for 2 pieces of big puso (rice in weaved coconut leaves), grilled pork belly, some skewers like pork intestines and pork ears, and a share from a bowl of tinolang isda (fish soup). It was a superb meal for me; I was famished, by the way.

From IsdaBest, we again made our way to the boulevard and track the road to the famous Sans Rival. During the short walk, we noticed that despite the laid-back atmosphere of the city, a lot of people flock the seaside on the evening and it adds life to the gleaming lights being reflected by the sea. In no time, we were inside the dessert place known for yummy cakes.

Dessert time! We went to see the chiller and we were overwhelmed with the dozens of cakes to choose from. We had a great idea in mind and I was able to make it possible. We ordered 8 slices of different cakes and asked the crew to assemble it into a single cake, and tagged it as the ‘cakes of happiness’. One round of cake, 8 different flavors to try. 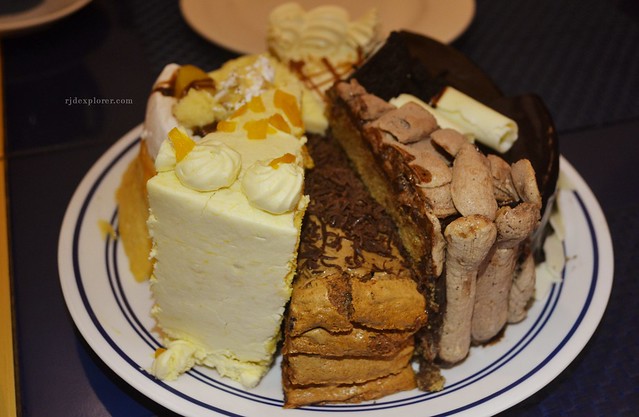 Sans Rival has two areas; the one along the boulevard facing the sea, which is a restaurant, that serves not only desserts but also meals, and the other, which is a cafe, on the adjacent street that serves as a hub for tourists to buy some pastries for pasalubong. We had our satisfy-your-sweet-tooth session at the restaurant.

Going back to the cakes, after everyone took a photo of the roulette of happiness, the slices of cakes were easily devoured by the forks and then disappeared. Notable cakes were the red velvet, banana cream cake, and date and walnut dacquoise. The sansrival has nothing to offer, just your ordinary sansrival.

After a savory dinner at IsdaBest and a sweet filled dessert session in Sans Rival, we hurriedly went back to our lodging to rest and catch a nice sleep in preparation for the second day in Negros Oriental.