When a friend uploaded clips from his Vietnam trip, I was intrigued by the night food tour he tried. Considering the crazy traffic and thousands of motorbikes in Ho Chi Minh City, the tour on two wheels is quite interesting and a different way of exploring the city. XO Foodie Tour, is one of the most trusted tours when it comes to night food tours in the city. The company promotes the intriguing bike culture of Saigon as a venue in discovering the hidden gems of the city. 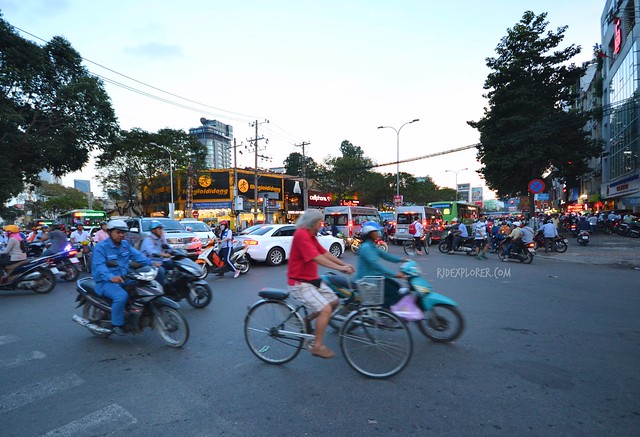 The XO Foodie Tour is at 75USD and others may consider it a bit steep. To tell you, the price already covers at least 8 entrees that are overflowing until you surrender. In addition to the package are accident insurance, free hotel pick-up and drop-off, English speaking tour guide and professional motorbike driver, helmet, lot of pictures, and meeting travelers all over the world!

XO Foodie Tour starts at 5:30PM and a guide will meet you at your accommodation around 5:15PM. Quynh, my driver/tour guide, arrived in front of The Common Room Project in her Ao Dai, the Vietnamese national costume. Before we left the area, she gave instructions and reminders for a safe ride in weaving Saigon’s chaotic avenues. Seeing the jammed streets on my arrival, I was excited as a kid to finally try riding on a motorbike in Saigon.

After few minutes of swirling and speeding on the street, we arrived on our first destination. On the restaurant, all members of the food tour were introduced to one another. I was the only Asian in the group; 2 Australians, 4 Germans, and 2 Americans. We shared few of our plans in Vietnam while the guys of XO Tours were busy preparing a surprise. 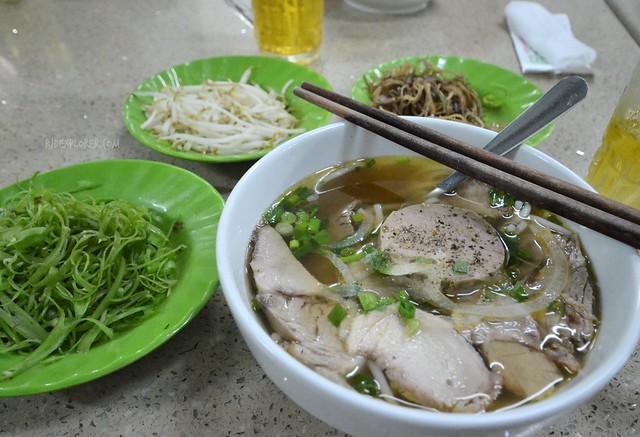 The crew paraded from the kitchen to our tables and offered a hefty bowl of Bún Bò Hue to every one. I was really eager to dig in because the inviting aroma of lemon grass on the soup. But before that, Ahn, the tour leader, introduced the Viet noodle; how it is prepared, and ingredients. The noodle is literally translated as ‘beef noodles from Hue’.

The bowl was served with side dish like beansprouts, scallions, and banana blossoms. You also have the option to boost the sharpness of the soup by adding dash of the powdered red chili. Everyone was so excited for the first slurp of the hot soup. The beef soup infused with lemon grass was really great that I could hear a choir singing from the cathedral. Kidding aside, the soup was really flavorful and the noodles perfectly cooked. Meat toppings were tender and the veggies on the side added some textures on every spoonful of the meal. It was just the first food stop but everyone was already ranting because of how heavy the meal was. Unfortunately for us, it was only the first stop that night.

Chinatown and the Moving Bushes

Before our next destination, the XO guys dropped us somewhere in Chinatown to give a brief introduction of the district. Like any country in Asia, Vietnam also has its Chinatown and considered one of the largest. The guide mentioned that the place is the main source for products and food being sold by people at night markets and vendors on food carts. If you intend to do souvenir shopping in Vietnam and want to save a lot, then go to Chinatown. The only catch here is that products are sold by volume, wholesale. 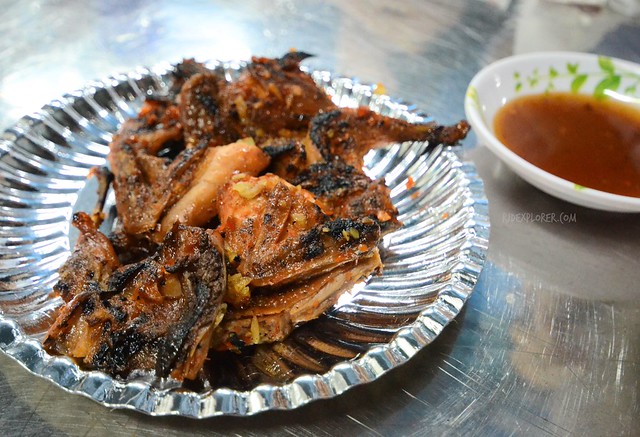 A long ride coursed us through the moving bushes. The guide mentioned that Vietnamese families employ extended family culture where several generations stay in a single house. Some couples living in the same house have no place for their private moments. With this, they rent a chair somewhere, hidden by the bushes and facing the Saigon River, that becomes their private place. The guide even joked that you can see the actions if you take a photo with a flash. 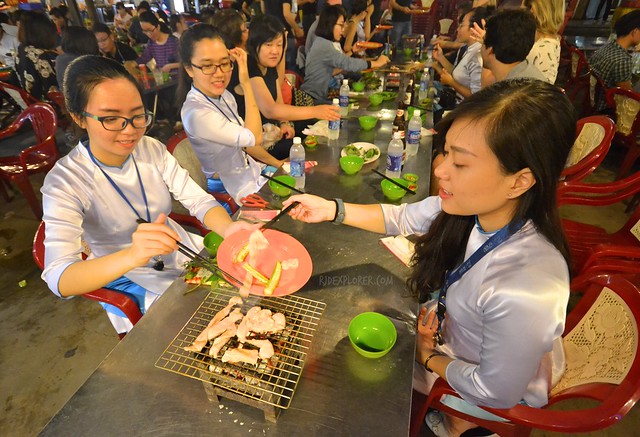 To expose us more with the Vietnamese culture, before going to our next food stop, the driver went through some narrow streets that led us to a night street market. Here, you can see locals on their motorbike hopping from one street vendor to another. Items available that time were seafood, meats like chicken, pork, and beef, some vegetables, and a lot of herbs and leaves.

Grilled Meats and the Chopsticks Challenge

Several intersections and we finally arrived on our second food stop. Everyone dining in the area was on low stools and crowding aluminum-steel tables filled with grilled meats on bright-colored plates. The XO Team started to bring out food for us and they were so generous to grill, de-shell, and do every minor thing like squeezing the citrusy fruit for our sauces. There were two dips created for us: chili fermented tofu sauce and garlic and lemon. 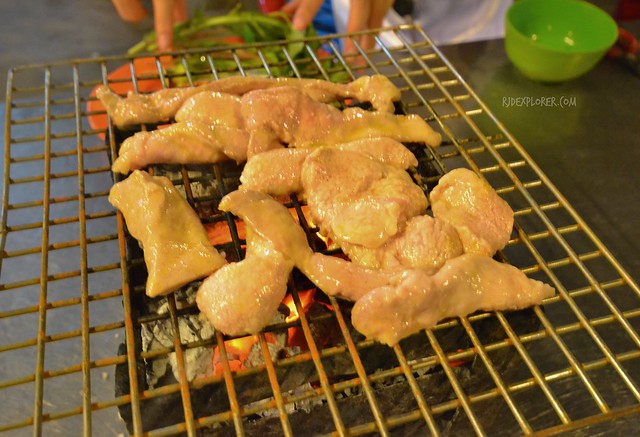 Meat served were goat and beef that were grilled into perfection and paired with three kinds of leaf: basil, mint, and fish mint (a heart-shaped leaf). The tender goat meat, marinated with fermented tofu sauce and cola, went really good with the fish mint leaf. I also liked how the flavors ensemble for the beef and basil dipped in rock salt and garlic sauce. Apart from that, the team challenged us to chow on some frogs. It’s not a new thing for me as I grew up eating fried frogs from the rice-fields. 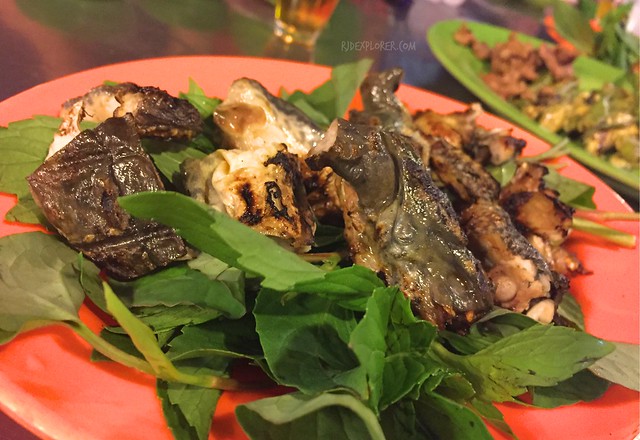 But hell no, the frogs they served still have their skin on and it freaked me out! Taking the challenge, I slowly calmed myself and tried dipping a slice on the garlic sauce. It wasn’t that bad so I took another one and tried having the other dip. The grilled frog with toasted skin has more texture and aroma. If you can’t stand the taste, you can easily ask for bottles of beer that also comes free with the package, unlimited! In addition are grilled okra and prawns. 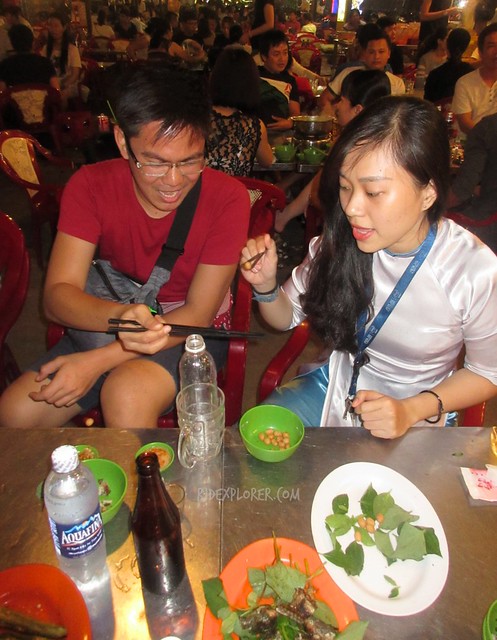 Before we ended our unique meal, the guys introduced the chopsticks game where the guests and guides teamed up to snatch the most coveted prize. The guides will pick, using chopsticks, peanuts from the bowl and transfer it to the guest’s chopsticks. The guest will then transfer the peanut to an empty bottle of mineral water. Since Asian blood runs in me, I was one of the winners! Winners got XO key chains and button pins as prizes. It was a fun game!

Next stop was a bit personal when it comes to the information shared to us by Ahn. He lived in the US for quite a while but decided to go back to Vietnam because he wanted to be a millionaire (currency conversion). Kidding aside, he wanted to be with his family and also be part in helping his country. According to him, a Vietnamese is either poor or rich and the gap between these buckets is really significant. Wealthy people have more than one car and numerous real state properties. For their counterpart, having a motorbike is great and staying on the same house with several generations and just waiting the upper hierarchy to pass the ownership of the property is usual. 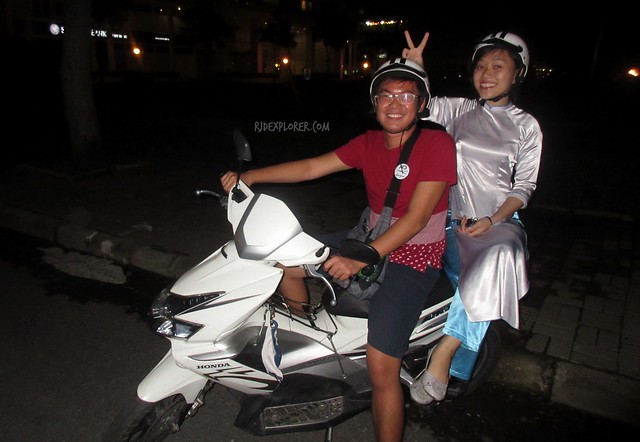 District 7 is cleaner, avenues with high-end cars sans the bikes, towering apartments, and foreign food chains and brands, the expat’s place of Vietnam. The discussion went a bit deeper discussing the economy, stock market, and purchasing power of the people. When most countries rely on credit cards and loans, Ahn mentioned that Vietnamese people purchase stuff in full amount and don’t depend on credits.

Enough with the Vietnamese culture and we again boarded our bikes to our next food destination now on the hip area of District 4. Bikes were speeding as my guide trying to park her bike on the side. She went the other side of the road first instructing me to follow. Crossing the road is not new to me because in the Philippines, you can also cross on any part of the road. 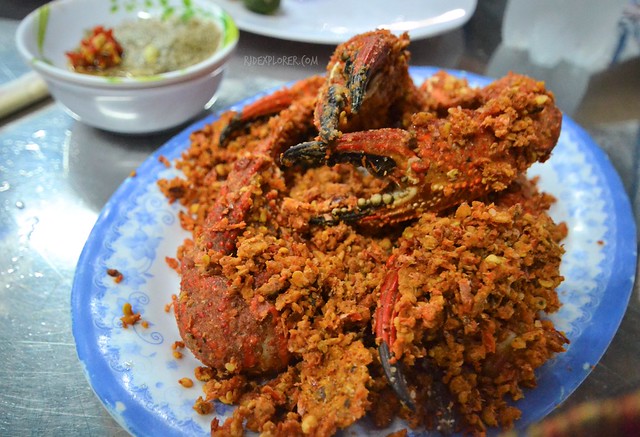 The crew already set all the stuff we needed to try on the last stop. Fried quail, crab pinchers in spicy rock salt, scallops with scallions and nuts, and undeveloped duck egg (locally called as balut). The group started to feast and out of all the items prepared for us, the scallops stood out. I normally have baked scallops with garlic butter and cheese but the version of Vietnam is way better. The roasted nuts add texture and distinct aroma that really make it more delectable by having some drops of the chili rock salt with lemon. 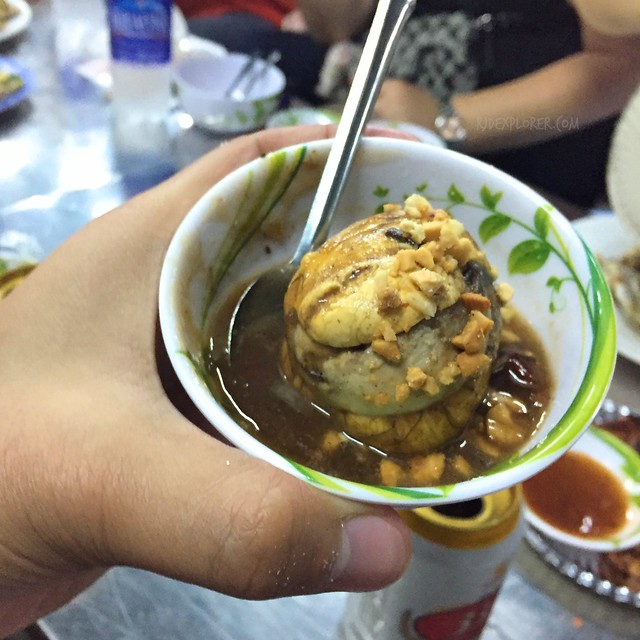 Quail meat tastes similar to chicken while the spicy rock salt made the crab meat really appetizing. Since I’m the only Asian in the group, I demonstrated the proper way of eating balut. I took out the egg from its shell and chowed the entire of it. The show earned me applause from the Vietnamese guides and recognition from the non-Asian guests. That was the last stop of the tour and the organizers allowed us to order anything we wanted: beers and food, at their expense. Unluckily, we declined as we were already full and a tiny more meal would definitely explode our tummies. 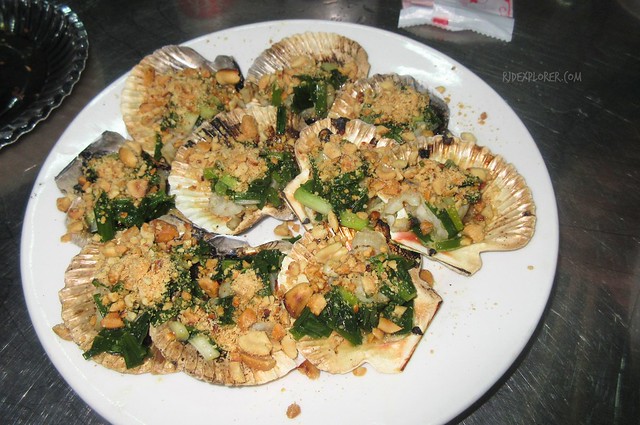 Prior to the food tour, I’ve read from other online magazines and websites that XO Foodie Tour lets their guests experience the best local foods in Ho Chi Minh City. What I didn’t know is that the tour is not only meant for eating best and delightful meals in Saigon. If you want to ride a bike in the city but scared to navigate the roads, the XO Foodie Tour is the best way to discover the city. On two wheels, you’ll get to know not only the food of Saigon but also its history and culture.