Sorcery. Potion. Magic. These are some of the words that were usually associated with Siquijor. Somehow offensive for the locals yet they already embraced it and made it a way to earn, through tourism. Despite these hearsays, Siquijor is one of my dream provinces to visit. When I moved to Cebu, I asked some workmates to join me on a weekend trip to the island province. But since most of them are hesitant to spend a night in the mystical island, I resorted to a solo trip, thus a Siquijor itinerary.

In an active group on Facebook, with members sharing do-it-yourself trips itineraries, I found two travelers visiting Siquijor same with my travel dates. We started a chat and met at Dumaguete port on an early Saturday morning.

We didn’t want to strictly follow an itinerary but to spontaneously hop from one destination to another. The accommodation was not part of the planning stage that we indeed hopped from one resort to another just to secure a place for the night. Renting a motorcycle for 24 hours was more convenient for the three of us than availing a tricycle tour being offered by the locals.

Backpacker dorms, like JJ’s Backpacker Village, really save a lot from our travel budget than booking a reservation on some cozy resorts, well for us. If you have the luxury, go for it. We left our things at the front desk of the accommodation and started exploring the must-destinations of Siquijor, as per the tour info guide we got at the tourism booth near the port.

The original plan was to circumnavigate the island province but we were bedazzled by the beauty of some destinations and we weren’t able to cover everything, a reason to come back. From San Juan, Lazi, and Maria, here’s the list of tourist attractions you must visit while in Siquijor.

Locals consider Capilay Spring Park as their public swimming pool located just in front of their municipal hall. Water is cold and deep yet clear where you can actually see tiny fishes swarming. The natural pool directly flows to the sea with its headspring located at the rear end of the pool. There’s no entrance fee but there are some tables on the sides that you could use for some picnic, I bet also for free. At the hillside is a grotto that visitors could also visit for a short prayer. 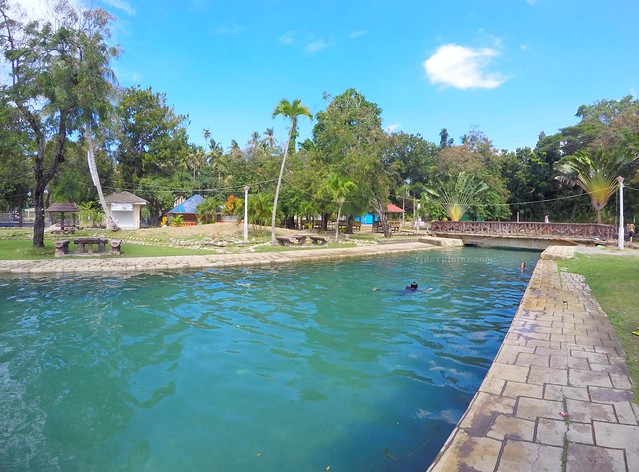 The 400-year old balete tree is a bit supernatural with the hundreds of roots and vines. The gigantic tree, with its shade, is a nice stop from the long and winding roads of the province, especially on a sunny day. The enchanting tree also provides water to its residents and in fact, you can have an unlimited fish spa with a fee of Php5. The fishes, of different sizes, will nibble your dead skin and tickle your feet. 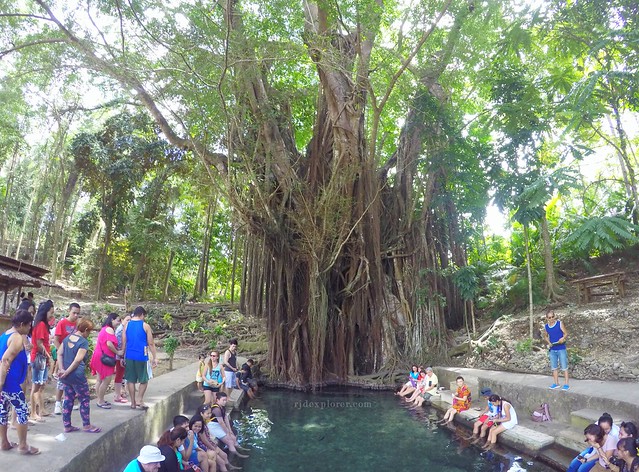 San Isidro Labrador Church was declared by the National Commission for Culture and Arts (NCCA) as one of the most outstanding heritage churches in the Philippines. Both the church and the convent were also considered by the National Museum as national cultural treasures. 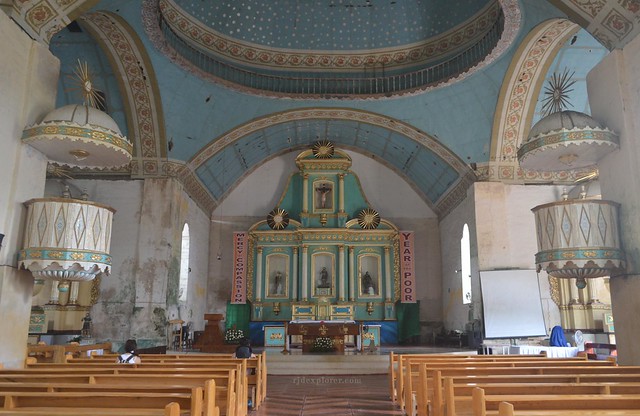 The church was built in 1884 out of coral-stones and hardwood. The simple facade of the church as viewed from the road is really striking with the obstruction of some branches of trees. Interiors of the structure are also minimalist; basic half circle windows, blue ceiling patterned by a single design, and a simple yet striking altarpiece enclosing four images.

Getting inside the convent was one of the things we failed to do. We made ourselves contented by taking photos of the old building having rusty roofs and wide window panes. The convent is the biggest among the oldest convents in the country and is believed to have been the vacation house for the Diocese’s priests at that time.

Tarzan swing, an activity available on the first tier of the waterfall, made Cambugahay Falls prominent to all tourists. Minus the flock of tourists, the three-tiered waterfall that is surrounded by a lush landscape is a great spot for some meditations. The cold and the not-so-deep water in the basin of the first level is perfect for swimming on midday. 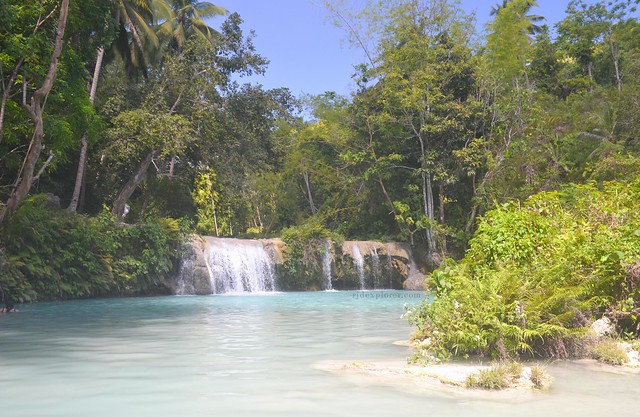 If you intend to include Cambugahay Falls on your Siquijor itinerary, it’s better to be prepared for the short trek going down to the falls, bring some food with you, be mindful of your belongings, and don’t forget to channel your inner Tarzan.

In a cove on the east side of the island is a hideaway spot for everyone visiting Siquijor. The snaky road going to the beach resort passes by a man-made forest with a canopy of Molave trees shading the road. There are some fees being collected; Php10 environmental fee, Php15 entrance fee, and Php20 parking fee. The small stretch of the beach gets crowded sometimes, has white sand not fine as Boracay but an idyllic place for some beach-bumming. 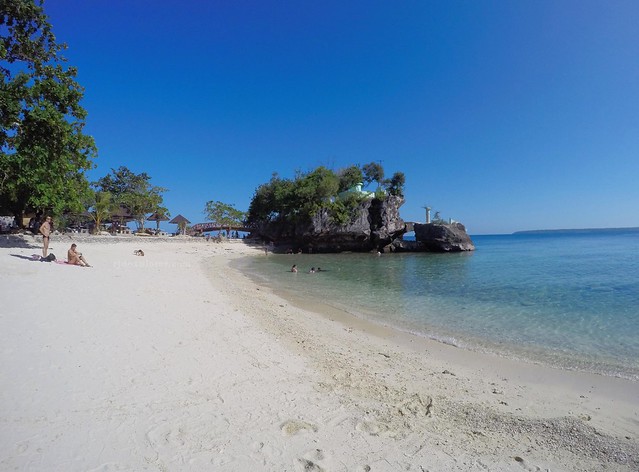 An islet serves as a vantage point and actually reveals the clear light green to dark blue colors of the sea. The management installed two diving platforms; 7 and 10 meters respectively, but they regularly close it during low tide to ensure guests safety. The place is a resort so expect a restaurant serving meals to visitors. If you plan to dine, I suggest you order in advance since waiting time is so long and can even take an hour. 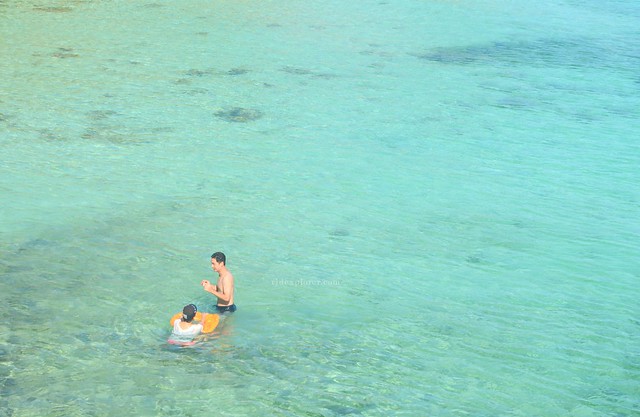 OUR LADY OF DIVINE PROVIDENCE (Maria)

Going back to San Juan from Salagdoong, we dropped by a church in Maria, Nuestra Senora de Providencia. The century-old church, which is made of brick, is being guarded by the image of Sta. Rita, the patron of impossible cases, holding a skull and a crucifix. The three-tiered belfry is separated by a few meters from the main structure. It was also interesting to see some plants growing on top of the pillars of the church’s façade. 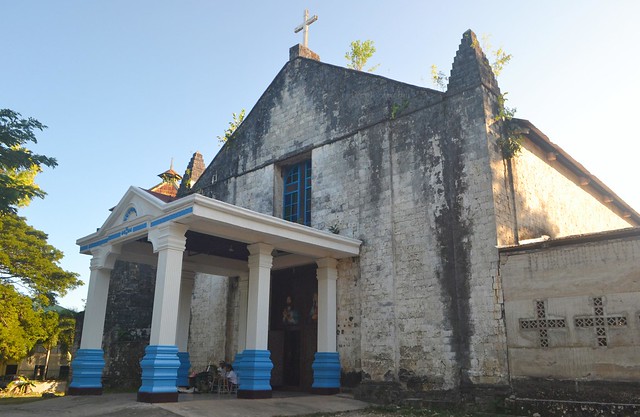 Siquijor offers one of the best spots for sunset viewing and we literally chased it because we spent a little over two hours in Salagdoong Beach. Thanks to the deserted highways of the province and we made it to San Juan beach before sundown. That sunset on a Saturday was one of the clearest ones I’ve ever seen, clear means not so much cloud on the horizon. 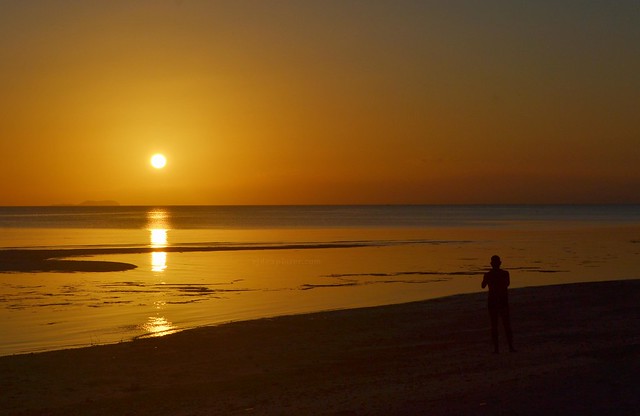 Most backpacker hostels are located in San Juan beach and morning walks by the beach are usual episodes. Hammocks suspended on coconut trees by the beach in JJ’s Backpacker Village are chill spots while waiting for breakfast. 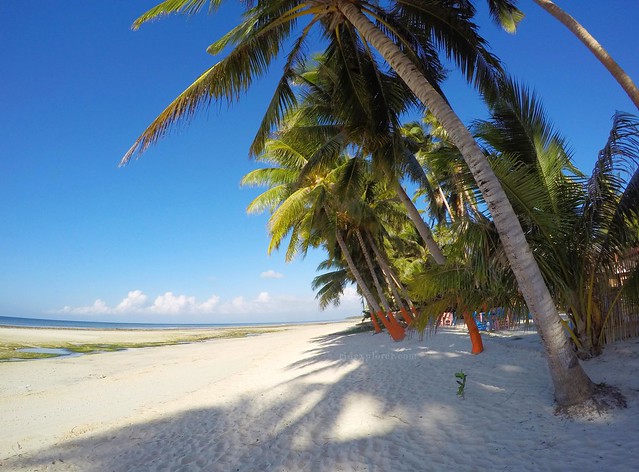 Last destination we dropped by before heading back to Dumaguete is St. Francis of Assisi Church just a stone-throw away from Siqujor Port. In front of the church is the Triangular Landmark having the ‘Welcome to Siquijor’ sign. The church is made of stone and cruciform while the convent with stone rubble. A belfry is standing on a distance from the church which locals believed that it also served as a defensive structure, and a watchtower. 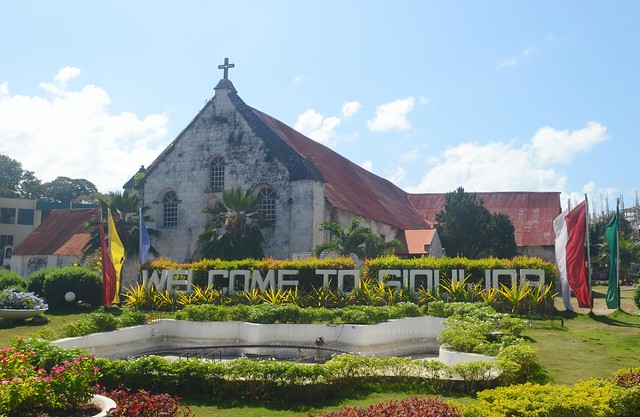 As much as we wanted to squeeze all attractions on our itinerary, a weekend is really not enough to accommodate everything. If by chance you’ll be spending more days in Siquijor, other attractions include the following: nature parks like Bandilaan Mountain View Park, Guiwanon Spring Park, and Tulapos Marine Sanctuary; caves such as Cantilan Cave, Cangmatnog, Boljo, Canghunog-hunog, Tulawog, Canghaling, Bitaug, and Banahaw; waterfalls like Lugnason and Cangbangag Falls; and others such as Paradise Bay, St. Vincent De Ferrer Bell Tower, Kagusuan Beach, and Liloan Forest.

* This itinerary is just from Dumaguete City. Please adjust just in case you’re coming directly from Manila or from neighboring provinces like Cebu.

** All photos of the accommodations above were taken from Agoda.com. 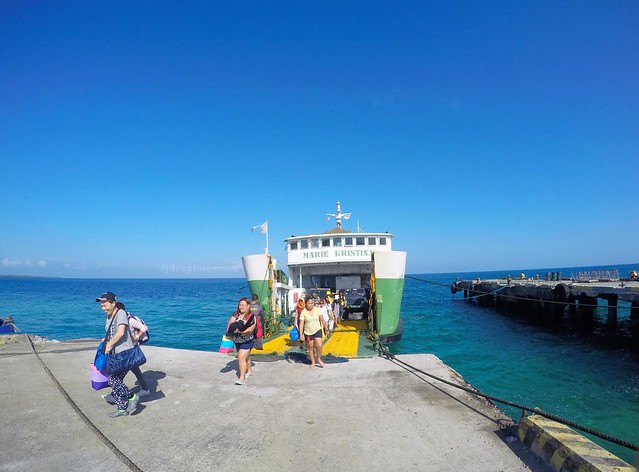 From Mactan International Airport, make your way to South Bus Terminal and take a bus bound to Liloan, Santander, travel time is about 3-4 hours. Buses bound to Bato also drop passengers in Liloan Port, just ask the bus crews. From Liloan Port, take a 20-minute ferry ride to Sibulan Port where you can ride jeepneys bound to Dumaguete City. Take a tricycle to Dumaguete Port, near the boulevard. Fast crafts and ships are plying the Dumaguete to Siquijor route, daily.

HOW TO EXPLORE THE ISLAND

There are different ways to explore Siquijor. You can either rent a motorbike, hire a tricycle or multicab for your stay. Renting a motorbike for 24-hours will save you fare rides from San Juan to Siquijor as the tricycle and multicab will only last for 8-hour tour. For motorbike rent, you can contact BRAAAP ISLAND TOURS near the port for rentals. Contact Jorich at 0917-954-4960.