Two of my dormmates at Mad Monkeys Hostel just had a visit to Tuol Sleng Genocide Museum (or S21) before my arrival in Phnom Penh. They shared their experience at the genocide museum and suggested that I should visit it together with the Killing Fields. Chartering a tuk-tuk for 15USD for a half-day tour for the two sites is too much for me. However, I found out that the genocide museum is just a 20-minute walk from the hostel. 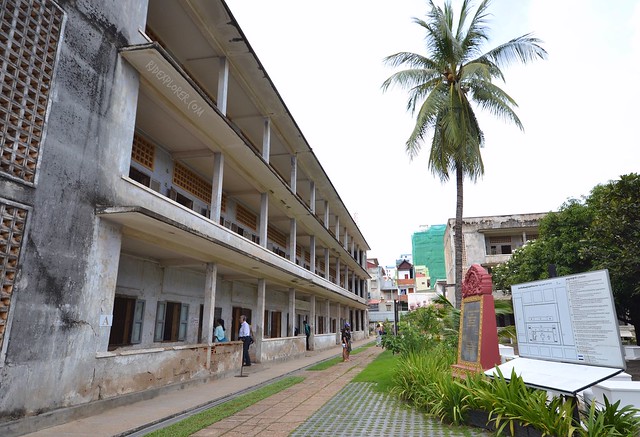 Entrance fee is 3USD and another 3USD if you want to avail an audio guide on your preferred language. Tourists inside the compound had their headphones on with the narration of the scenes that happened on the site. I was clueless and still thinking whether to pay the additional 3USD for the guide or just continue the tour. The only information guide available is the pamphlet for the audio tour.

The genocide museum was once a secondary school before the Khmer Rouge happened between 1975 to 1979. In 1975, Tuol Svay Prey High School was taken over by the Khmer forces and converted it to a prison called the Security Prison 21 (S-21). It was a secret center of nearly 200 prisons where people were tortured and killed by the Khmer Rouge.

Nearest building to the entrance is Building A with most of its rooms bare and only containing iron beds. It has a total of 20 cells with the first level having 10 cells used for detaining, interrogating, and torturing high-rank officials. The upper floors have 5 cells each that also served the same purpose as the first. Taking photos in some parts of the museum is not allowed, by the way. 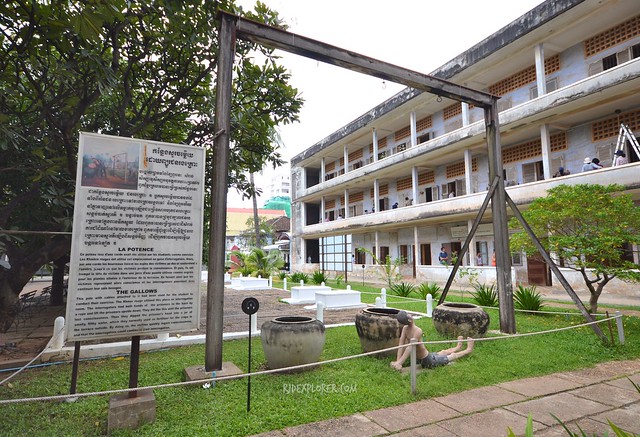 Just outside Building A, before the next building is the gallows. The poles with cables that were used by students for exercise were utilized by Khmer rouges for interrogations. Prisoners were tied and lifted upside down until they lost consciousness. The captive’s head will then be dipped in a jar of water until they regain consciousness to continue the interrogation process. 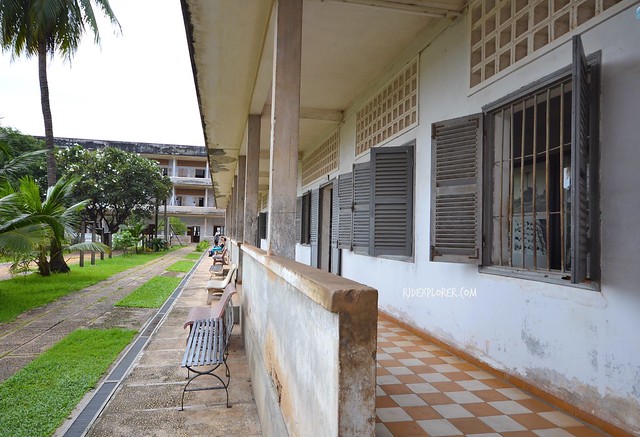 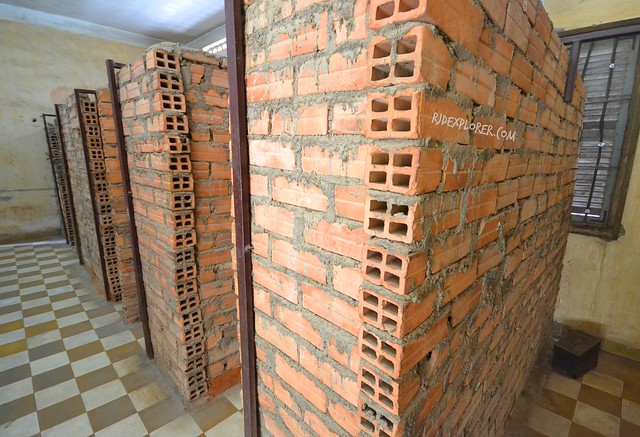 Some of the buildings still store, within the corners of its walls, the haunting sufferings, and fear of the Cambodians who suffered cruelty in the area. Bricks were used to divide the rooms to create shower-size cells for detention. Hundreds of black and white photographs of men, women, and children are extremely graphic showing the victims of genocide, with their eyes open, condemned to death during interrogations. 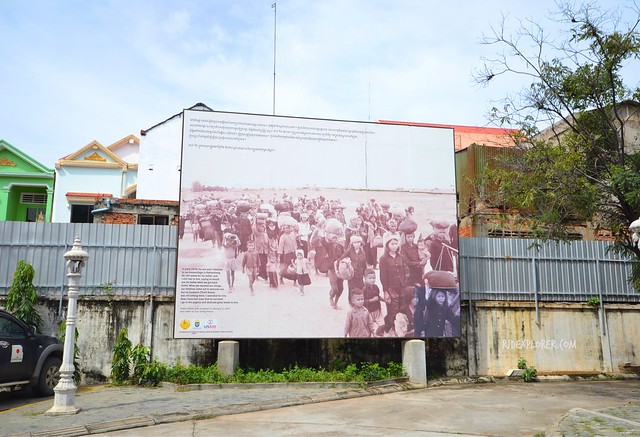 Building C offers more space for detainees with the brick and wooden cells. The second floor of the building was a mass detention area. All floors of the buildings were also covered with braided barbed wires to prevent the captives committing suicide. One of the realities that some of the victims already considered committing suicide than suffering from tortures during the interrogation. 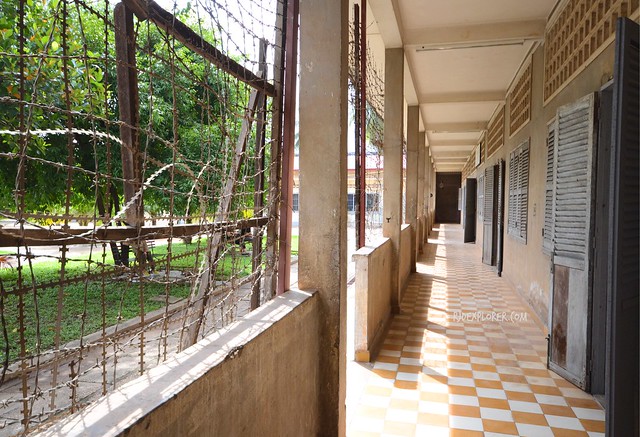 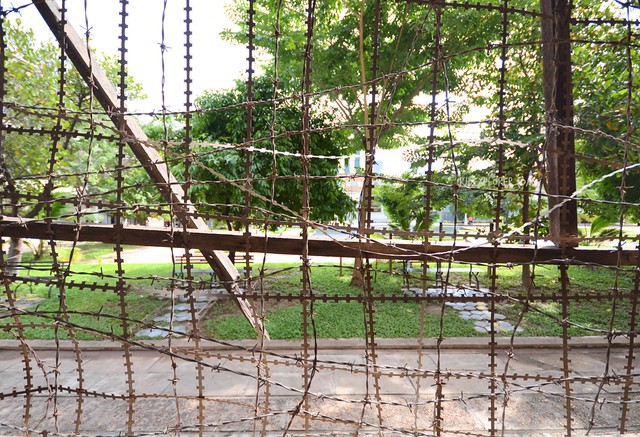 It was estimated that the total number of people imprisoned in Tuol Sleng Genocide Museum is between 12,000 and 20,000. Out of these numbers, there are only 12 confirmed survivors. One room narrates the experiences of the survivors of the gruesome event. 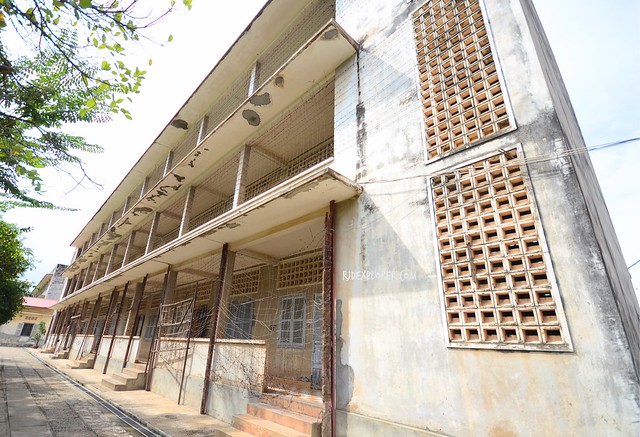 One of them is Vannat, from Battambang, who worked as a professional painter. He was arrested on December 30, 1977, by 2 spies, one was his neighbor whom he knows for a long time. He also suffered from the atrocities but when the Khmer Rouge knew he paints, he was asked to paint portraits of a high Khmer leader. His sufferings changed and moved out of the common prison. On January 7, 1979, he escaped when the Khmer Rouge encountered the liberation army on the way south. I was a bit teary-eyed reading the entire narration of Vannat with regard to all the pains he endured and seeing other detainees condemned to death. Some of the survivors are still alive and you can chance and talk to some of them during your visit. 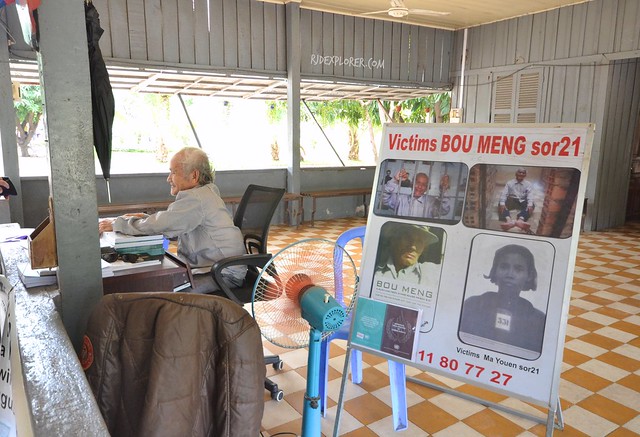 I’m still glad I decided to pay a visit to Tuol Sleng Genocide Museum during my stay in Phnom Penh. I may not be that familiar with the events during the dark days of Cambodia under the Khmer Rouge, yet I was able to capture all the atrocities that were inflicted on the innocent victims of genocide. The horrors of Tuol Sleng Genocide Museum still haunt everyone passing by the rooms and hallways of its buildings.