Most travelers believe that Siem Reap is the capital of Cambodia with the prominence of its Angkor Wat. But the truth is, country’s capital city is Phnom Penh that is also the most populated city of Cambodia. From Vietnam, I had a 6-hour bus ride to Phnom Penh with its tourist attractions I had no idea beforehand. It was a short stay in the city yet the limited time allowed me to check out things to see and do in Phnom Penh.

On November 9, 1953, France granted the full independence of Cambodia. And to commemorate the iconic event, an independent monument was built in 1958. The structure is on the junction of Norodom and Sihanouk boulevards showing an evident Khmer architecture with the lotus-shaped stupa. The landmark is the center of festivities during national celebrations. I was lucky to drop by Phnom Penh on November 9 and was able to observe how the locals celebrate their independence day. 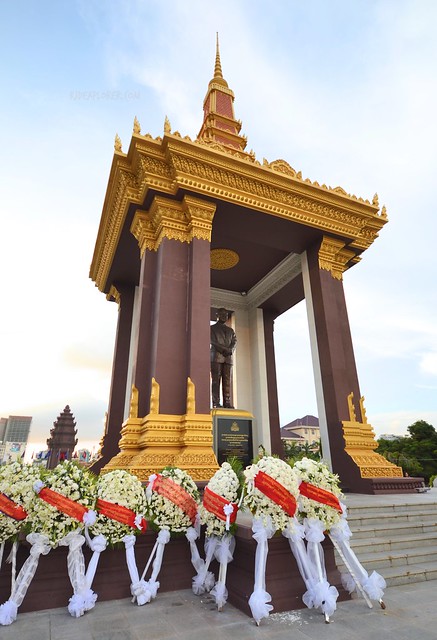 The Independence Monument is attached to a recreational park that extends up to Samdach Sothearos Boulevard. Norodom Sihanouk was the King of Cambodia from 1941-1955 and 1993-2004. To honor his contributions, a stupa featuring his bronze statue was inaugurated few meters from Independence monument in October 2013. The paved part of the park, where the statue resides, serves as track for locals for their afternoon runs.

Next park is the Wat Botum Park adjacent to Wat Botum where it got its name. Within the vicinity of the park is a stupa dedicated to the demonstrators who were killed outside the National Assembly on March of 1997. Another one is the Cambodia-Vietnam Friendship monument showing a Khmer woman and a baby with two Vietnamese liberation soldiers. The tableau commemorates the Vietnamese liberation of Phnom Penh from the Khmer Rouge in January 1979. Apart from these structures, the park also serves as venue for some aerobics and choreographed dances of locals. 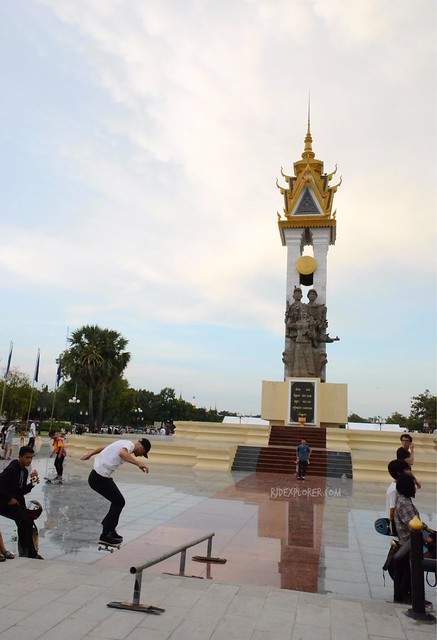 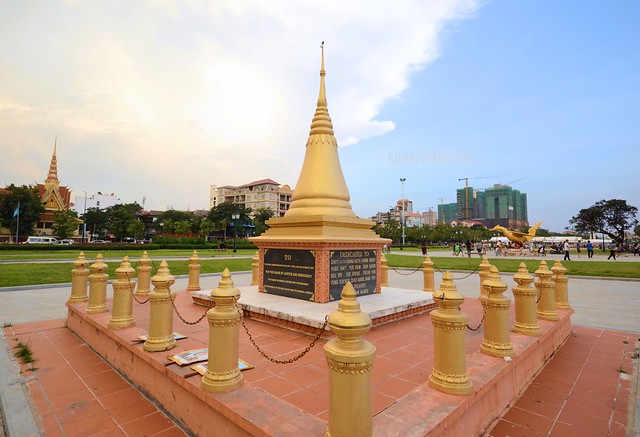 THE ROYAL PALACE AND PARK

The Royal Palace was closed on my first day in Phnom Penh because of the Independence Day celebration. I made sure to be up early on my second day for me to explore the royal compound before heading to Siem Reap. Entrance fee is a bit steep at 6.5USD. The payment will give you access to the Royal Palace and Silver Pagoda. They are on different compounds but an access alley was created to connect the two. Some of the buildings are open for guests yet entering other buildings are not allowed. 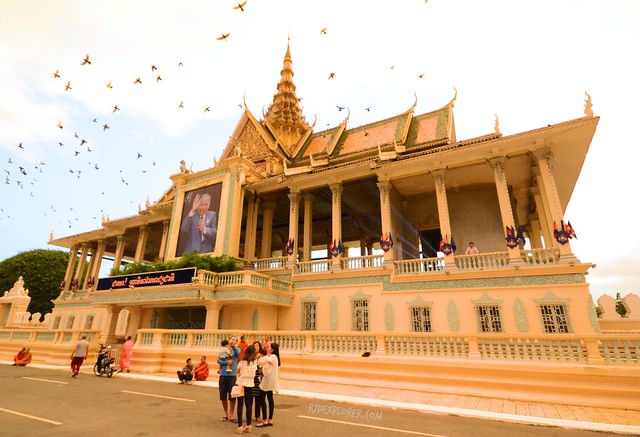 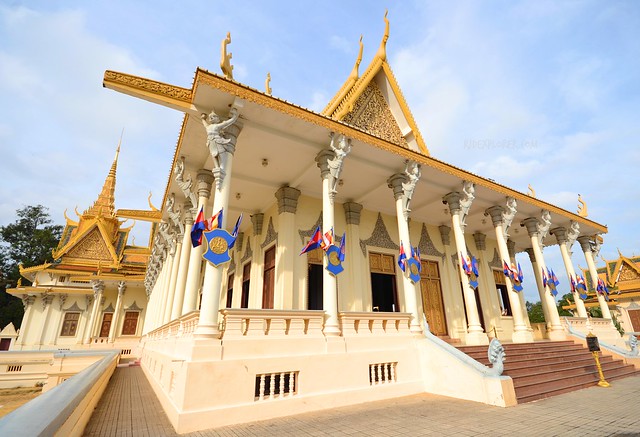 The main structure in the Royal Palace grounds is the throne hall now still serves as venue for royal ceremonies like coronations and weddings. In addition are the Moonlight Pavilion, Hor Samran Pavilion, Pochani Pavilion, and other halls. For the other complex, apart from the Silver Pagoda are numerous stupas that are actually the burial sites of the previous members of the royal family. A replica of the Angkor Wat is also installed few meters from the pagoda. You can spend 45 mins to 1hour exploring the entire complex.

What’s interesting in Cambodia’s National Museum is the stunning Khmer temple architecture of the building itself. It is the largest place in the country housing collections of Khmer art from sculptures, ceramics, and ethnographic pieces. Admission to the museum is at 5USD. 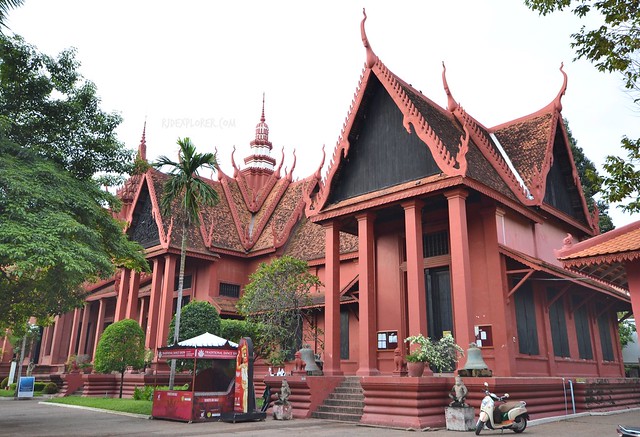 Tonle Sap River and Mekong River meet in Phnom Penh. The Royal Palace park is actually facing the point where the two river meet. Sisowath Quay is a strip dotted with hotels, restaurants, and bars. Most tourists visit these places for some strolls or a bottle of Angkor beer. During my stay in Phnom Penh, Sisowath Quay was filled with locals who waited for the independence day fireworks display. 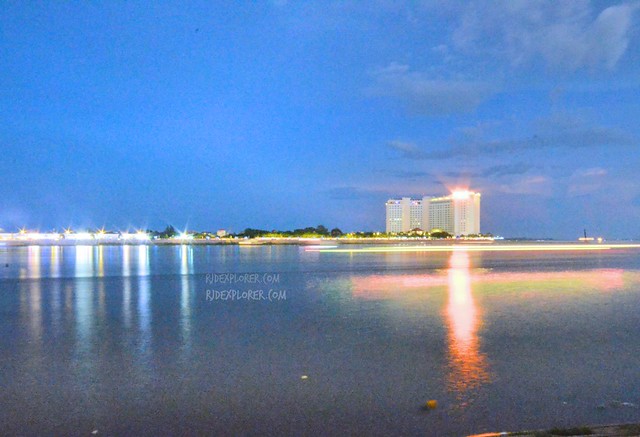 For local finds and handicrafts, head to Central Market to avail cheap souvenirs like keychains, shirts, and handbags. The market gets crowded at times so prepare your list beforehand for a faster shopping time. Don’t forget to bargain when doing your purchases and please be mindful for you not to be overcharged. Another known market in Phnom Penh is the Russian Market, which is around a kilometer away from Tuol Sleng Genocide Museum.

Along Sisowath Quay is Wat Ounalom, the most prominent temple in Phnom Penh because it’s the headquarters of Cambodian Buddhism. The compound has several buildings but you can see all of them in no time. When I entered the complex, monks and locals were setting up a float covered with gold textiles and some Buddhism related figures. One of the buildings were also decorated with LED lights that make it stand out from the darkness of the evening. Drop by the complex during your walk along Sisowath Quay. 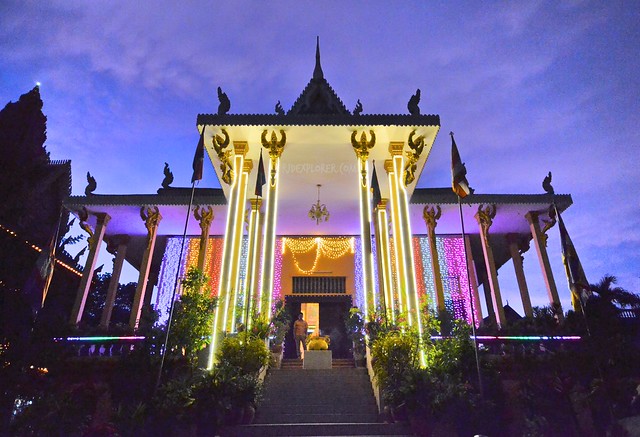 On a roundabout on the north end of Nordom Boulevard is Wat Phnom. The temple is on top of a small hill and is 27 meters from the ground. The lush surroundings of the temple make it a great spot for a break when having your walk around Phnom Penh. At the other side of the temple is a big clock that I thought to be just plainly a part of the landscape. I was stunned when I saw the clock hands moving and it is indeed on time and accurate. 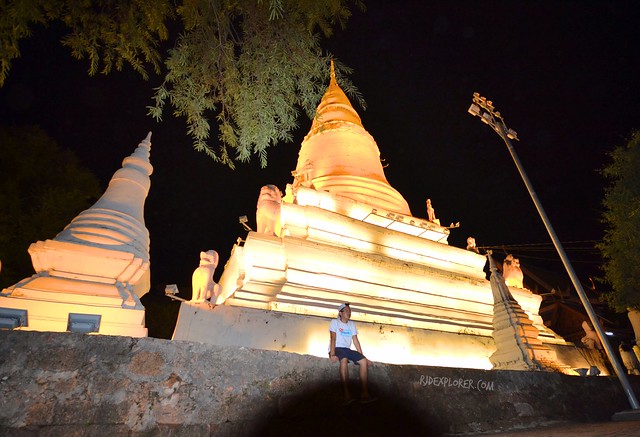 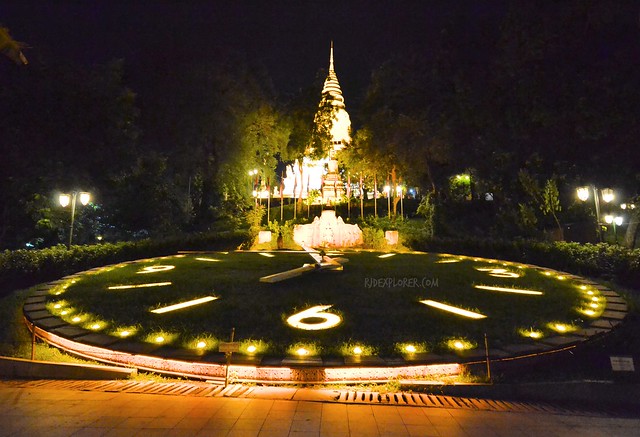 A 20-minute walk from Phnom Penh proper, or can be included with the Killing Fields tour on a tuktuk, is the Genocide Museum or Tuol Sleng Prison Museum. During the Khmer Rouge, it was a school that was converted into the infamous Security Prison (S-21) and one of the execution centers during the regime. A 3USD fee will allow you to enter the compound and explore the rooms and quarters of the buildings that served as detention for the prisoners. 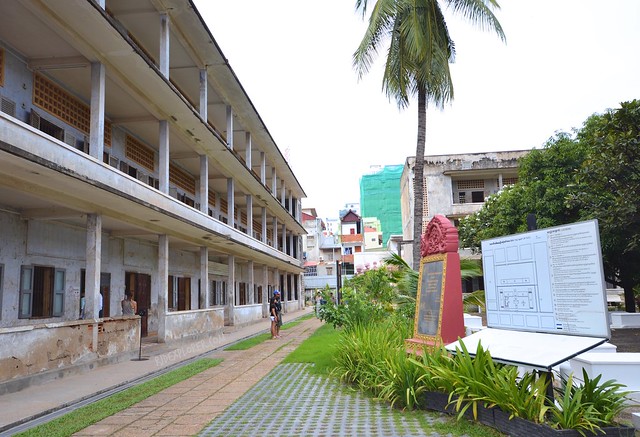 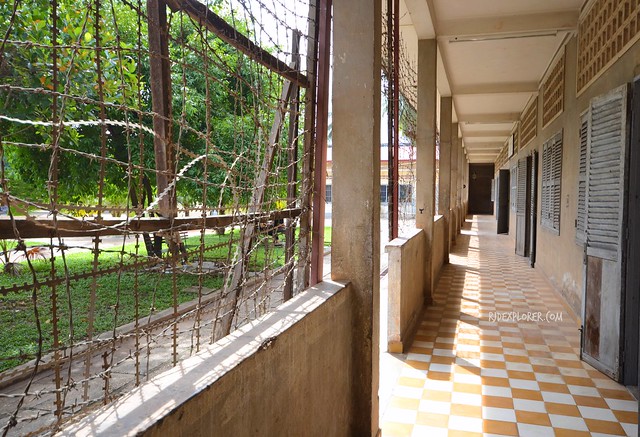 An additional 3USD will get you an audio guide on your preferred language. The audio guide provides a substantial information about the history of the museum by narrating some stories on the different sites of the prison museum. On the other hand, avoiding the additional fee for the audio guide won’t change the experience because brief information guides are available on most of the sites.

Coming from Vietnam, Phnom Penh only serves as a short stop for travelers before heading to Siem Reap. It’s a small city to explore and tuktuk drivers offer a 10-15USD tour on these places. If you have a day to spare in the city, walking around and hopping from one spot to another is not that hard. All attractions are within the city center except for the Tuol Sleng Genocide Museum and the Killing Fields.