The fun-filled experience at the Universal Studios Singapore made me include its counterpart when I visited Japan. Universal Studios Japan is one of the reasons why Filipino tourists visit Osaka. Excitement is really intense especially if you’re a huge Harry Potter fan. It’s the nearest location Filipinos can go to experience Hogsmeade and Hogwarts. I’m not a diehard fan of the brand but I love the movies, Prisoner of Azkaban is still the best for me.

Universal Studios Japan is near the Universal-city station of the JR Yumesaki Line. Park operation hours differ everyday but normally accepts admission from 9AM to 7PM, a little early than Universal Studios Singapore. Check here for your date of visit so you can go to the park as early as possible. Lines stack so swiftly.

RELATED POST: How to Spend Less than PHP40,000 for Two Weeks in Japan

Same with my Universal Studios Singapore visit, I purchased my one-day theme-park pass from online travel booking site Klook. You can skip the ticket booth and show instantly at the park entrance. Buy your ticket in advance from Klook and skip the lines on your day of visit. Click here to avail huge discounts on your booking.

When your schedule seems to fall on a day and month when the park has tons of parks goers, check the predictions here, other tickets you can avail from Klook are: Express Pass, Express Cool Pass, and VIP Wristband + Harukas 300. These tickets can help you maximize and enjoy every ride and attraction of Universal Studios Japan. Another thing that makes booking through Klook a better option is that you can use your ticket a year after your purchase. You can just change the schedule of your visit if circumstances happen.

How to Maximize Your Day at USJ

The tips and hacks on my Singapore post are still applicable when you visit USJ. Attractions like Amazing Spiderman, Evangelion XR Ride, Hollywood Dream – The Ride, The Flying Dinosaur, and Jurassic Park – The Ride offer single rider lane. Visit attractions that are far from the entrance like New York and Jurassic Park because newly arrived people tend to stick with attractions near the entrance such as Hollywood. 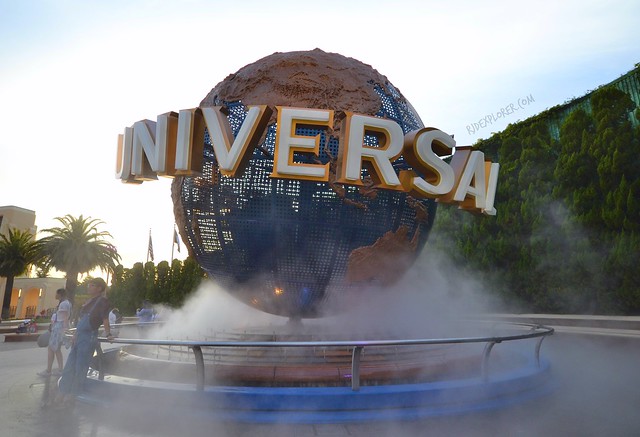 My visit was on the second Tuesday of June and at around 5 PM, Wizarding World of Harry Potter and its attractions were already clear from heavy traffic. On the other hand, rollercoaster Hollywood Dream The Ride and Backdrop had around an hour of waiting time until closing time.

Must-rides at the Universal Studios Japan

I wanted to take advantage over everybody so I entered the park, grabbed an information guide, and went straight to the inner attractions. Karma was a bitch because I got a Japanese guide the reason I got lost. Looking for a USJ crew on the ground, I got myself an English studio map and made my way to Jurassic Park section.

My appetizer for that day, The Flying Dinosaur. The rollercoaster ride is not the usual one because riders are in a prone position in joining the flying dinosaur on its roam around the park. It’s also considered as the world’s longest flying roller coaster.

Adjacent to The Flying Dinosaur is the Jurassic Park – The Ride. The river tour allows park-goers to explore the Jurassic Park covered with lush foliage. It starts with several dinosaurs roaring and springing above the water. The big tube enters the ‘secured area’ of the park with dinosaurs escaping the facility. The last part of the ride features a raging T-Rex that makes the tube escape and fall on a 25.9-meter drop and directly plunging into the river. You’ll surely get wet on the ride so prepare your poncho and other coverings!

THE AMAZING ADVENTURES OF SPIDERMAN – THE RIDE 4K3D

If Universal Studios Singapore has its Transformer ride that draws more tourists on queue, version of it on USJ is the Amazing Spiderman – The Ride. Fulfill your superhero dream and join Spiderman with his goal to protect the city. Follow his adventures and help him defeat the villains that most of the time attack the attraction car. The ride starts with a simple narration and shadows of the character leaping on buildings. But the thrill builds up after Spiderman himself shows up in front of the car.

HOLLYWOOD DREAM – THE RIDE AND BACKDROP

Trying the Flying Dinosaur will surely make you crave for more. Falling in line for the Hollywood Dream rollercoaster is an easy decision to make. The Ride, the normal rollercoaster has a single rider lane so if you want to maximize your time in the park, then head to the said lane. On its other side, Backdrop only offers the regular lane so expect for longer waiting time. Both rides utilize a single metal rail for the attraction. The only difference between the two is that backdrop suggests a backward ride. Both provide a unique experience so I recommend trying the two. Don’t forget to sing with the karaoke while swirling on the ride’s turns, loops, and drops.

HARRY POTTER AND THE FORBIDDEN JOURNEY

The longest waiting time I had on my Universal Studios Japan visit was the Forbidden Journey at Wizarding World of Harry Potter. The line enters the Hogwarts castle that excites park-goers, huge Harry Potter fan or not. After you enter Hogwarts, all your stuff should be stored in the lockers. Pass by Dumbledore’s office, Hogwarts Portraits, and meet Ron, Harry, and Hermione at the Defense Against the Dark Arts classroom before the kick-off area of the ride.

The Harry Potter and the Forbidden Ride is recognized as the world’s best attraction for five consecutive years making wait times horrible most of the time. The rides start with a powder from Hermione that transports the riders to Hogwarts. Riders then follow Harry and Ron to join a Quidditch match until a dragon appears. Few seconds of thrilling speeds and drops will move the ride into a dark room where a viper, spiders, and Dementors will threaten the riders. It will end by returning to Hogwarts over the Black Lake where everyone cheers for the group’s success and Dumbledore sending the riders back to reality. For other attractions, rides, and events at the Wizarding World of Harry Potter, visit my separate post here.

My visit to USJ was in time for the Universal Cool Japan from January 13 – June 25, 2017. The event brings Japan’s some entertainment brands to life. One of the coolest rides I’ve tried is the Evangelion XR Ride. Utilizing the single rider lane made my waiting time shorter than the other riders. What makes the ride coolest among other attractions in the theme park is the usage of a VR goggles that offers a 360-degree experience for the ride. Visuals, effects, and sounds were perfectly synched that you’ll forget you’re just visiting a theme park. I planned to queue for the second time but the attraction already had 70 minutes of queuing time both for the regular and single rider lanes.

Other attractions I recommend checking are Backdraft, Terminator 2:3D, Waterworld, and kiddie rides under Snoopy Studios and Wonderland if you have kids with you. Unfortunately, Jaws was under maintenance during my visit.

Notes and Other Tips

To summarize my one-day visit, here are some tips I recommend for you to maximize your stay at Universal Studios Japan.