Baler indeed has a colorful history and we were able to savor it by a short walking tour from Museo Baler to Aurora Quezon House. Our energy were drained by the overwhelming narrations so we asked locals where to eat lunch. Tricycle drivers are my immediate sources on this kind of scenarios every time I travel. 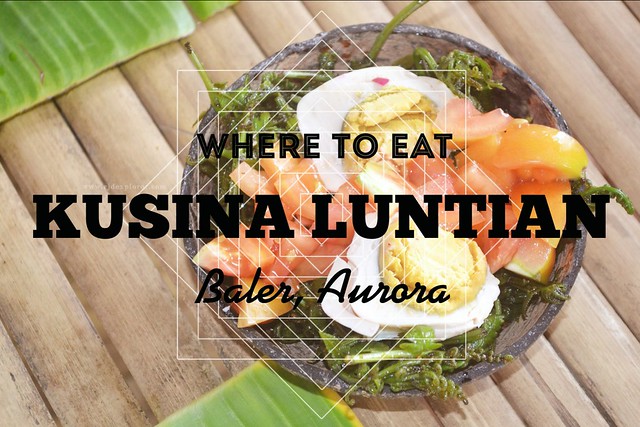 We raided the tricycle terminal and told the driver to bring us to Kusina Luntian, as it is one of the places they recommend, aside from the Rolling Stores near Museo Baler.

Less than five minutes and we were dropped in a narrow road in front of a nipa-hut. I asked where the restaurant is and the driver, using his lips, pointed the bahay-kubo. We handed him our fare and got inside the premises to check out what Kusina Luntian is all about. 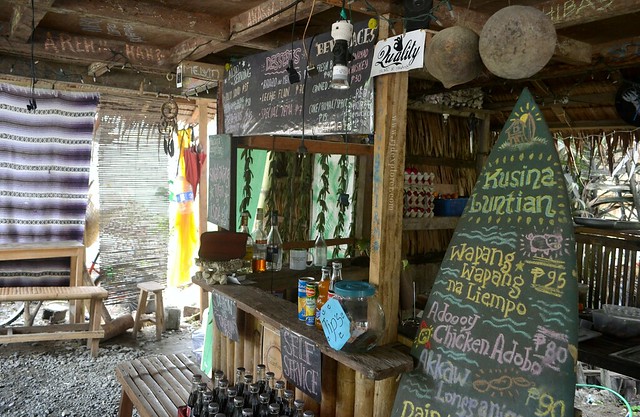 Well, it is basically just an ordinary nipa-hut, bahay-kubo, that was converted into a restaurant. I’m not sure if restaurant is the right term. From the staff, we found out that it is a hang-out place for most surfers because food are very affordable. She also added that the owner is also a surfer. I’m glad on the way they accommodate guests but I was already hungry that time and didn’t comprehend with her stories.

The menu is written on a surf board and some cardboards overhead their counter. Before stating our orders, we were curious and asked what ‘wapang-wapang’ means. The staff at the counter explained that it’s a term being used by the surfers every time they surf on big waves, you know the sound, ‘wapang!’

Main idea of the place is similar to a binalot style of dining, your meal is served on a banana leaf and you need to eat with your bare hands. The menu includes Wapang-wapang na Liempo (Php95), Adooy Chicken Adobo (Php80), Akkaw Longganisa (Php90), Daing na Bangus (Php80), Wang Patawad na Tapa (Php90), and Daing na Pusit (Php75). They also offer the famous salad in Baler, Paco Salad (Php55), some desserts, and drinks that include fresh buko juice for Php40 and Banayad Whiskey.

Aside from rice meals, they leveled up by offering burgers served with coleslaw and chips, and sausages that includes bratwurst, citrus pepper, and Italian.

Since we were on a big group, they directed us to their extension dining area, still a nipa-hut having bamboo tables. No chairs available and you’re going to sit on the bamboo floorings. Kusina Luntian is a self-service place with saucers, condiments, and glasses available on a counter they created. Dining experience is such a unique thing, minus the unacceptable drainage system of the nearby residential houses that gives a foul smell.

Our meals arrived after centuries and we were eager to devour everything on top of the banana leaf. That’s how hungry we were. Each meal was served in this manner from the bottom; rice, meat/fish, half salted egg and tomato, and paco (fern). After cleaning and washing our hands, everyone was silently and greedily munched on their orders. It was a good meal. The liempo didn’t have that eerie fats, it was chunky, and perfectly marinated. The meal was completed with a fresh buko juice. To end your meal, you need to dispose the banana leaf in the trash bins available.

Kusina Luntian indeed offers a different way of dining with the open-air cottages turned to dining areas, surf boards as menu, and the affordable and uniquely named meals. The limitedness of the menu is also a superb idea as customers won’t have a headache during the ordering process. Lunch at Kusina Luntian was the first meal we had in Baler, and we were super satisfied.