If you’re following my social media, you’ve probably heard about how I forced myself to learn how to bike. With some destinations for my 100-day Southeast Asia backpacking trip require biking for tours, I spent few weekends learning how to ride a bicycle. Biking was really helpful in exploring Bagan (Myanmar), Sukhothai (Thailand), Vientiane (Laos), and Ninh Binh (Vietnam). And recently, I discovered that a bambike tour in Intramuros makes your historical exploration of the walled city in Manila a unique experience.

What makes it a unique one is the fact that the bikes used for the tours are made of bamboo. Yes, you heard it right, a raw material ubiquitous in the Philippines and one of the main materials in building a Bahay Kubo, a traditional Philippine house. Bambike, a term for the bikes and at the same time the brand, are hand-made bamboo bikes. The bikes are products of a project in Gawad Kalinga in Victoria, Tarlac thru the initiative of Bryan Benitez McClelland, founder of Bambike.

To promote the product and to support the advocacy, they launched few tours in Manila. They have actually several bambike tours in Intramuros, Poblacion in Makati, and in Bonifacio Global City. When I decided to spend a weekend in Manila to discover the capital city, I availed an afternoon Intramuros bike tour.

Bambike Ecotours have their quarters in Casa Manila where the bike tours usually commence. They have two tour types: express for an hour tour and the full tour for 2.5 hours. The bike tour available in Klook is a full tour so you can enjoy longer biking tour in Intramuros. A guide started the express tour while our group for the full tour watched the Bambike audiovisual to know how the brand started. 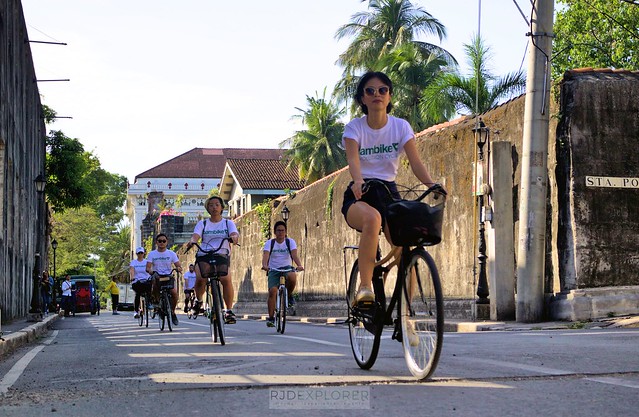 They have several collections of bikes so it’s better to be early at their headquarters to pick the best one that suits you. You can also ask the crew to adjust the bike seat if it’s too low or high for you. While waiting for the tour to start, you can get a glass of cold draft beer but please moderate for you not to mess around during the tours. Wink.

Since the brand’s headquarter is just adjacent to San Agustin Church, the first stop of the tour is the oldest church in the Philippines. The guide had few spiels but the interesting one shared was that the brick floors in the front yard of the church are actually Chinese tombstones. One of the bricks were flipped over and you can see the Chinese characters engraved on it.

Next stop of the group was the Galeria de los Presidentes de la Republica Pilipina that showcases the reliefs of the Philippine Presidents. The gallery has Emilio Aguinaldo up to Gloria Macapagal Arroyo while two slots are still under construction for Benigno Noynoy Aquino and Rodrigo Duterte. Few historical and political snippets were mentioned like why Emilio Aguinaldo became the first president, the regime under Ferdinand Marcos, and the first female president Corazon Aquino overthrowing a dictator.

The tour group had a short stopped near San Diego Gardens to see a Japanese cannon. The broken cannon that was used to shoot American ships is now aimed at the US Embassy.

Everyone biked again to Puerto Real Gardens to climb and walk on the walls of Intramuros. From the walls, you can see a golf course with manicured lawn which was once a moat that surrounds the walled city. Manila Hotel towers that side of Intramuros and our guide mentioned that General Douglas McArthur stayed in that hotel during his time in the Philippines. The general was commissioned by then President Quezon to serve as the Military Advisor of the Commonwealth. He lived in a suite room with his family and the bill went too high that considered him as the honorary General Manager to handle the cost. Literally a general holding a general manager position. 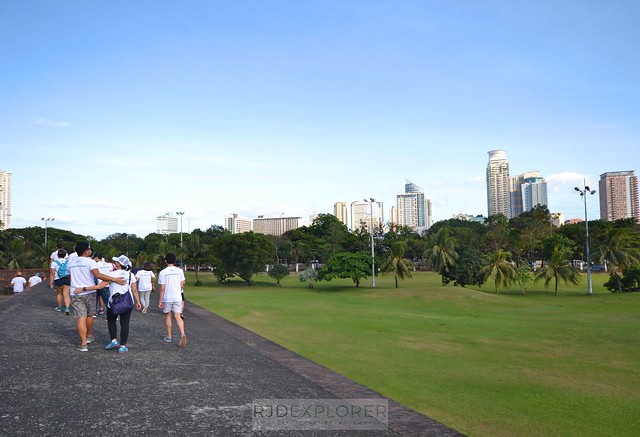 I was thrilled when the guide mentioned that we can bike on the walls. From Puerto Real Gardens, we went straight to Baluarte de Dilao, just in front of Bayleaf Hotel. The baluarte has dozens of cannons and served as one of the main defense points of Intramuros in the past. One of the members of the group decided to bike on the slope to the walls but forced to get down the bamboo bike midway. From this point, everyone was allowed to bike to the next point of the fortress wall. It was really fun biking on the walls even though the surface is not even most of the time. 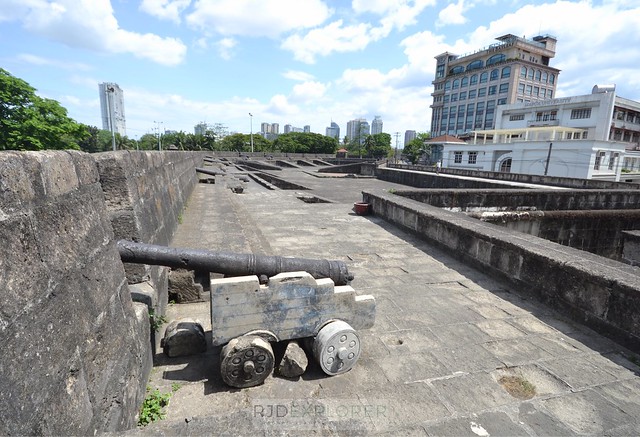 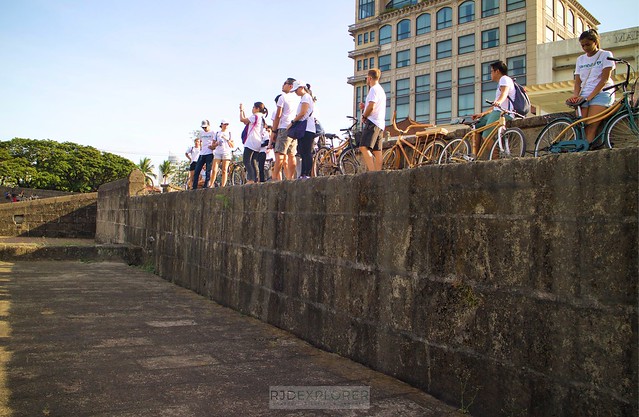 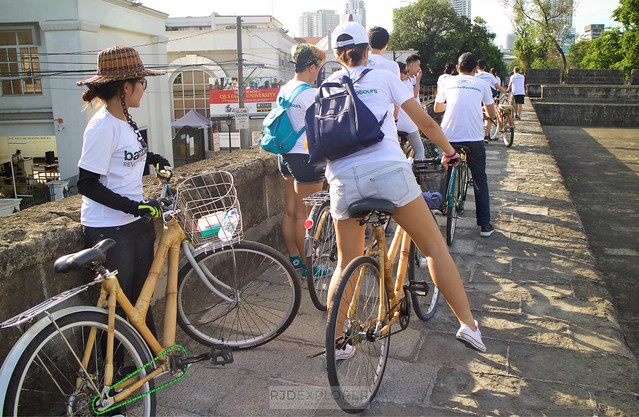 After a few minutes of rest under the shades, we again hopped on our bikes and followed our guide to Manila Cathedral. A massive crowd assembled in front of the church and follows a queue for the veneration of Pope John Paul’s relic honored at the cathedral. This is in addition to the families and relatives attending weddings at the cathedral. Our guide shared that for couples planning to have their wedding at Manila Cathedral, a two-year reservation is required. On the adjacent street is the Palacio del Gobernador, the former house of Manuel Estacio de Venegas, a governor’s aide. 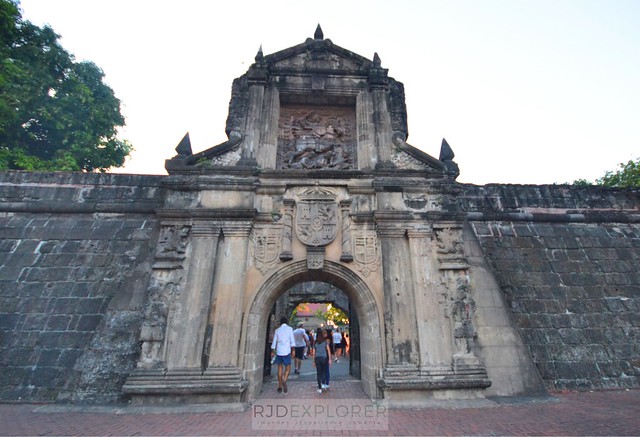 Last stop that afternoon was Fort Santiago, which contains several significant pieces of Philippine History. Rizal Shrine was the main highlight of the destination where items related to Jose Rizal, our national hero, were on display. His detention room is also open for viewing apart from the copies of his famous books Noli Me Tangere and El Filibusterismo. Tour participants can also proceed to Baluarte de Santa Barbara to view Pasig River from the walled city. To end the roam around Fort Santiago was following Rizal’s last walk, with metal footprints on the path, before he was shot in Bagumbayan, now Luneta Park. 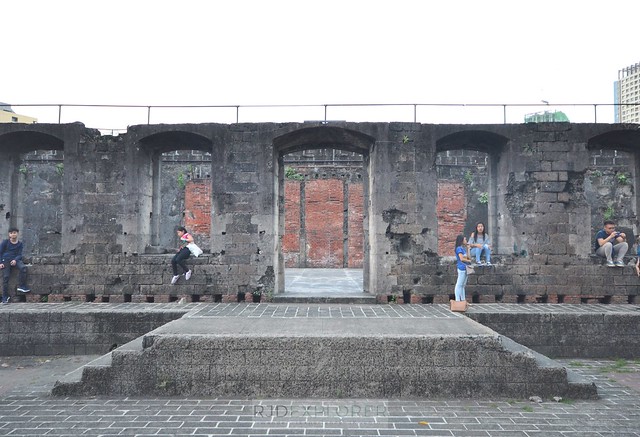 If you’re not into biking, you might consider availing a tour like the Walk This Way Tour of Carlos Celdran and other Manila tours available at Klook.

Things to Remember Before the Intramuros Bambike Tour

** Some of the photos here were taken by a Bambike Ecotour staff.