Sabtang Island is the smallest of the three inhabited islands of Batanes. Someone stated that a visit to the island is a piece-of-heaven experience. An overnight stay is also recommended to everyone for you to recapitulate the old Batanes. Travel to the island-municipality starts at Radiwan Port in Ivana where falowa, local motorized ferries that ply the Batan – Sabtang route, can be found.

Most wonderful things happen when you least (or maybe don’t) expect it. A dizzy falowa ride started our day as the cool breeze of the sea welcomed us in the Port of Sabtang. We needed to calm ourselves (and even our stomachs) from the wobbly trip we had. I was amazed by the tricycles in the island that instead of metals and some rubber/plastic materials, the coverings used were mainly branches of trees and dried coconut leaves. This allowed us to relish the fresh atmosphere of the island throughout the whole day tour.

If Mahatao has its Racuh-a-Payaman, Sabtang has its Chamantad-Tiñan View Point. This is the place where you can actually see some Ivatans lend their Kanayi and Vakul for picture taking purposes with the great landscape in your background. A short walk from the dusty road led us to the peak of the viewpoint that offers a panoramic view of the coast. 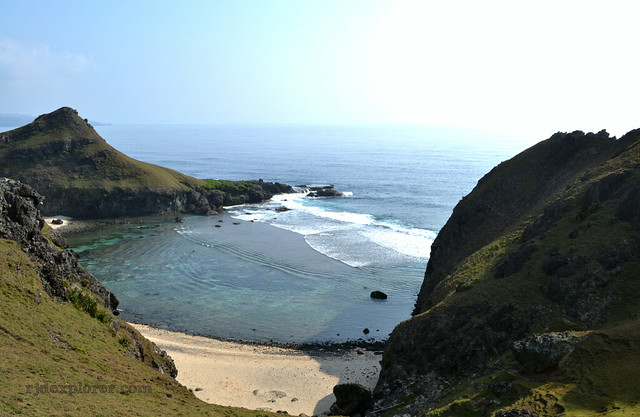 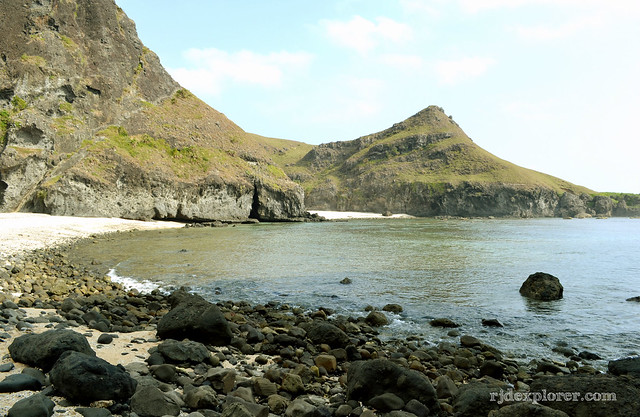 We explored a cove down the hills of Chamantad Viewpoint.

From that point, we saw a shallow sparkling water on a cove, and we didn’t dare to miss it. After messing up with the slope of the hill, we safely got down on the little cove. Pebbles and small to medium-sized rocks allied on the short strip of beach.

Sabtang is known for its stone houses featured in the six villages of the island: Sinakan, Savidug, Chavayan, Malakdang, Nakanmuan, and Sumnanga. Tourists frequent in the village of Savidug, but the stone-houses and the community of Chavayan and Sumnanga got me. 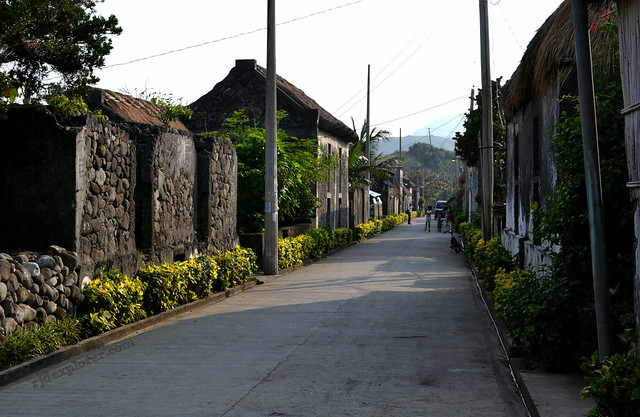 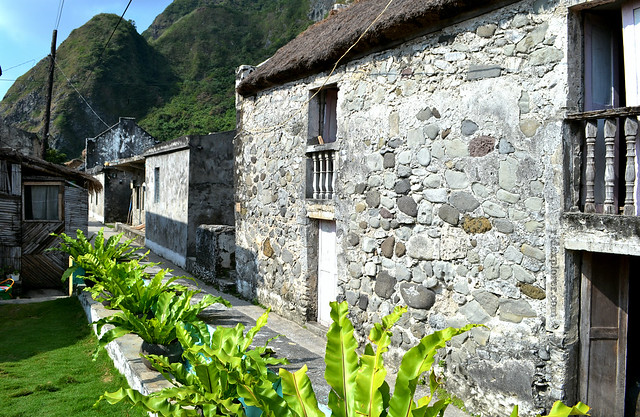 Stone houses being preserved in the villages of Savidug and Chavayan.

Stone houses in Chavayan village are still preserved that flanked the narrow strip of path being utilized by locals. Another attraction in Chavayan is their astonishing chapel which is just few meters from the beach and the only remaining church in Batanes roofed with cogon grass.

Even there are established viewpoints in the island; roads in Sabtang are perfect spots to enjoy the panoramic view of the island. Two parts of the municipal road worth for a stop is the cliff road going to Chavayan village and the other one between Malakdang and Nakanmuan with the Morong Beach on sight.

Before the village of Sumnanga, we found a ruined stone house with some papaya and banana trees already taken its interior ground. The house is the original home of Atanacio Dapilan who was a singer of Ivatan rowing songs, Kalusan that was first published in the National Music Textbook. Dapilan was the first nationally published Kalusan singer.

Chavayan and Sumnanga are neighboring villages but there are no paved roads connecting the two and a mountainous part separates them. We needed to loop around the island just to go to Sumnanga. Houses here are more compressed than the other villages which mean a tighter community. 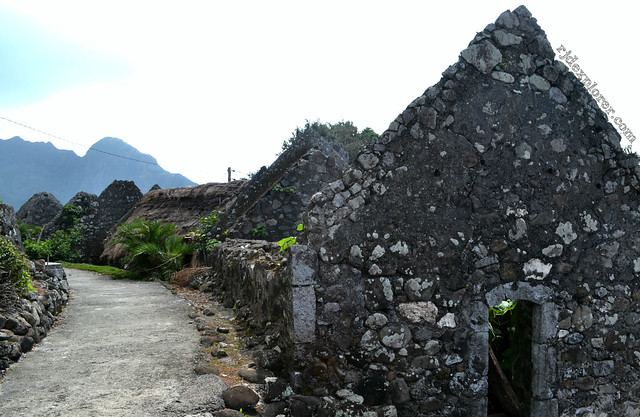 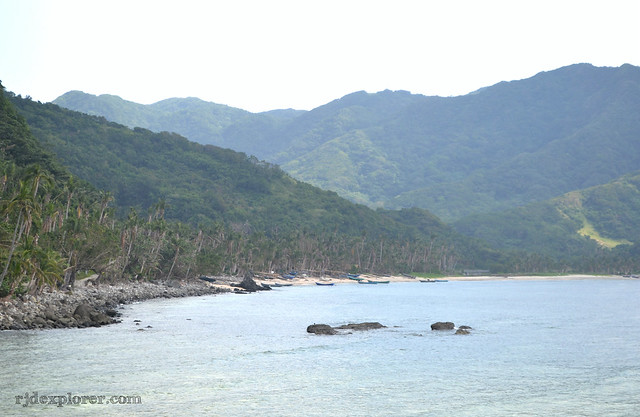 On the rear part of the village is the place they called as Duvek Bay. As per our guide, it is a site of the most pristine coral conditions in Batanes. Sumnanga is also tagged as the Little Hongkong of the province.

Beach is also present in this part of the country because it is also surrounded by sea. One of the attractions, and maybe most photographed area, in Sabtang, is the Morong Beach with the presence of the Ahaw natural rock formation. A stroll on the white sand beach during noontime was not that good idea so we just decided to shade under the stone arch. Maybe a late afternoon visit is best to capture the setting sun. 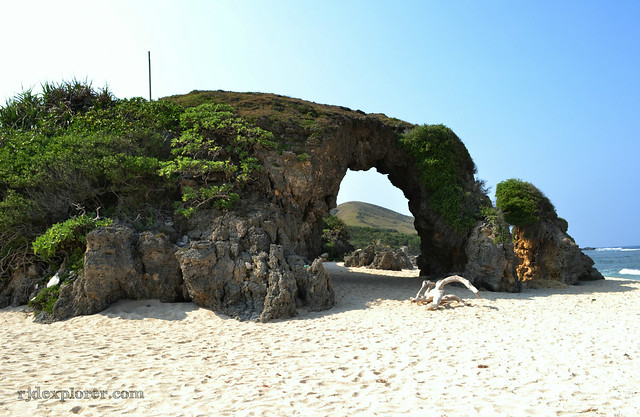 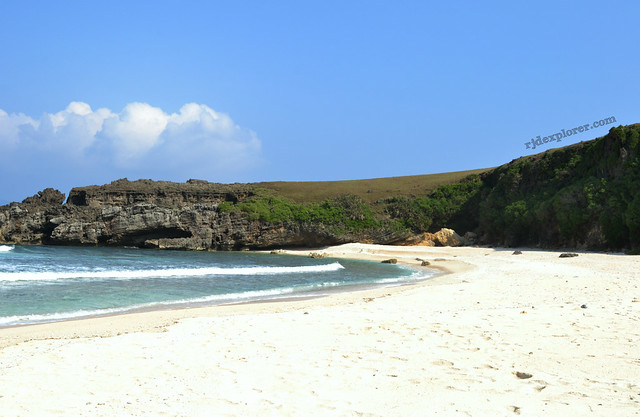 Batanes has only 3 lighthouses, and this is the only one located off of Batan Island. You can already see the lighthouse as you approach the port. Unfortunately, the location of the lighthouse is now privately owned and visitors aren’t allowed to enter the premises. From here, the bird’s eye view of villages of Sinakan and Malakdang with San Vicente Ferrer Church in the middle can be seen. 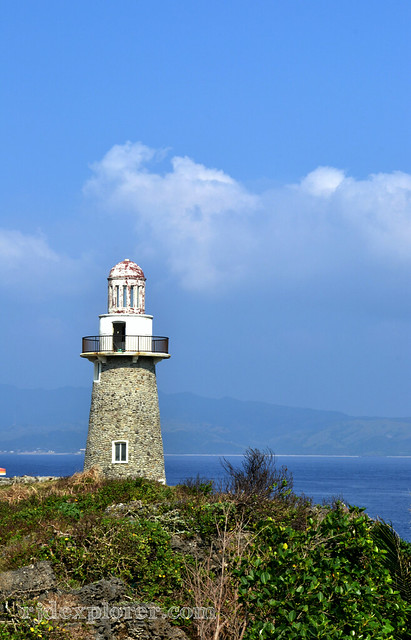 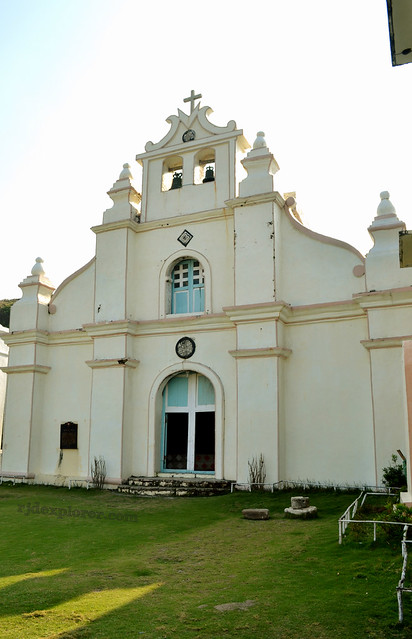 Our last stop on our loop around the island is the church of Sabtang. The church was painted white, patterned with pink lines and has blue doors. The green lawn in-front of the church adds a certain charm to the scenery. We were able to meet the parish priest, on his simple white shirt and walking shorts, who toured us around. He also showed us the ruins of the old church’s convent and chapel, and the 1887 deep well that will be declared as a national heritage. The Spanish Lighthouse located at the rear side of the church is also an added attraction.

Our island tour was ended by going back to Chavayan Village where we spent the night. The overnight stay in a stone-house was really unimaginable. Locals have their dinner around 6 and when 7PM came, the entire area went into total silence as if a control muted the village. We also minimized talking for us not to disturb the rest of the folks. Around 12 midnight when the power was shut off that left us with a sinister room, time for us to hit the sack.

This island of Batanes has been featured in several magazines, blogs, and TV shows. They were all right with the descriptions they have provided and their photos weren’t enough to give justice to the marvelous view you can experience firsthand. But, I was lucky to explore Sabtang Island and discover its hidden jewels in addition to the attractions these media try to promote.

How to Get to Sabtang Island

From Basco, take a tricycle ride to the town of Ivana where Radiwan Port is located. Since we were in a group, we chartered the tricycle for Php 200 (that’s for the 4 of us). If you’ll arrive early in the morning in Radiwan Port, you will catch the earliest ferry to Sabtang that leaves around 7AM. Next schedule is at 11AM. Travel time to Sabtang Island is around 45 minutes and fare is Php 75.