Half mermaid, half lion. That’s how they describe the Merlion structure in Singapore. The monument is considered as a national symbol of the city-state and commonly used as a personification of Singapore. The first time I saw Merlion was on a photo from my sister’s friend who worked overseas for a decade. On my first afternoon in the city, I also included the landmark on my itinerary. But before checking Merlion Park, here are some spots you could add on your afternoon walk.

From my accommodation near Bugis Junction, I trailed the street to Esplanade passing by the eminent Raffles Hotel. Across Bras Basah Road is the War Memorial Park that honors all civilians who died during World War II. The 67-m obelisk has four pillars each symbolizes the four main races of people in Singapore. 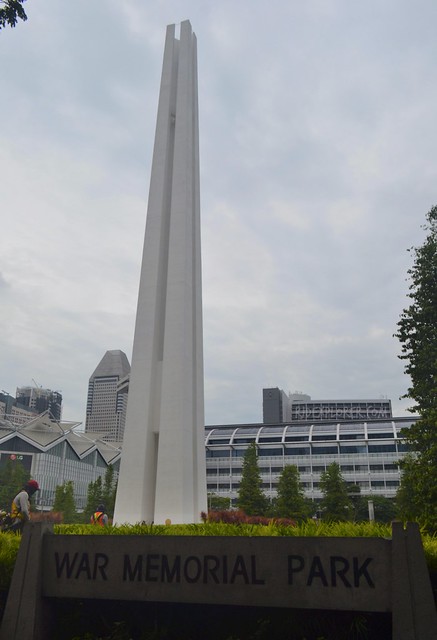 In the next block is the St Andrews Cathedral, the country’s largest cathedral. The church was named as such because of Saint Andrew, the patron saint of Scotland, to recognize the Scottish community who funded the first construction of the church. The original structure depicts a neoclassical design but issues and natural phenomena led to its closure and demolition in 1855. 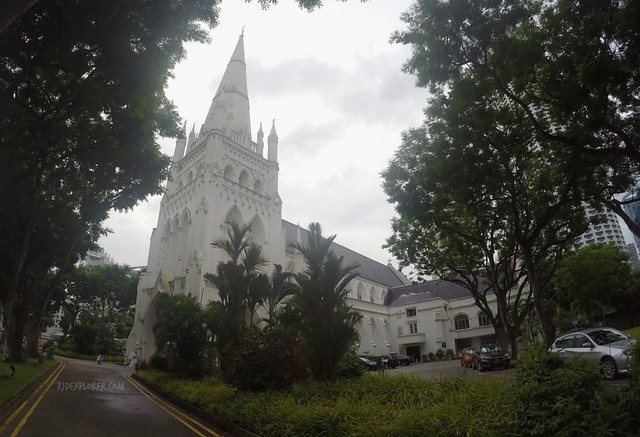 The new church was completed in 1861 having a Gothic Revival design by Colonel Ronald MacPherson. With its features and splendor, a lot of couples consider the area for their pre-nup photo shoots. The compound is also part of Singapore’s Civic District TreeTrail because of the Adenanthera pavonina trees that serve as natural green frame for the church.

The bare yet striking façade of the gallery is hard to miss during your walk in Singapore’s civic district. The new gallery is a fusion of the old city hall and supreme court house with the gap, which serves as the entrance to the gallery, covered with golden filigree and glass concave canopy. Several columns are also unmistakable on the galleries’ architectural design. National Gallery of Singapore, with tons of modern and contemporary art, has an entrance fee of SGD20. Book in advance via Klook. 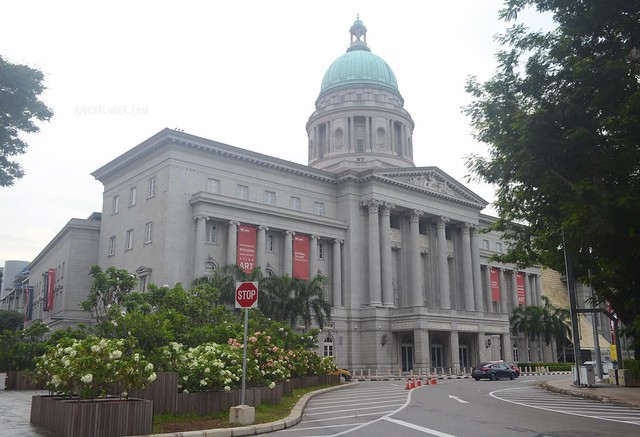 THE ARTS HOUSE AT THE OLD PARLIAMENT

Across the gallery is the Old Parliament House, the oldest existing government building in Singapore. It was renamed to The Arts House and now the default venue for some art exhibitions and concerts. The frontage has a bronze elephant statue with a marker that states, “His Majesty Somdech Phra Paramindr Maha Chulalonkorn, the Supreme King of Siam, landed in Singapore. The first foreign land visited by a Siamese monarch on the 16th March 1871.” 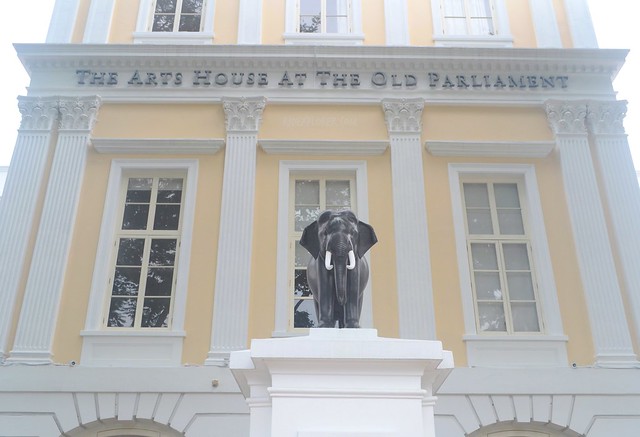 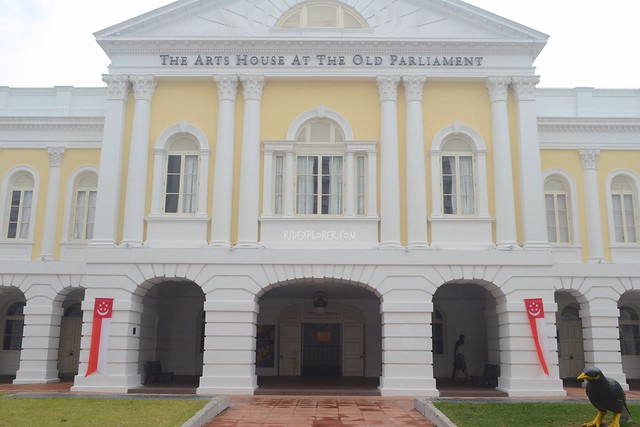 Old Parliament Lane traverses between the structure and the Victoria Theatre and Concert Hall and continues to the statue of Thomas Stamford Raffles.

Thomas Stamford Raffles is known for the founding of Singapore. The British statesman landed in that exact location in January 28, 1819. It started the development of Singapore from an obscure fishing village to an impeccable seaport and modern metropolis. Facing the Singapore river will give you an angle of the statue with the towering skyscrapers on the monument’s backdrop. 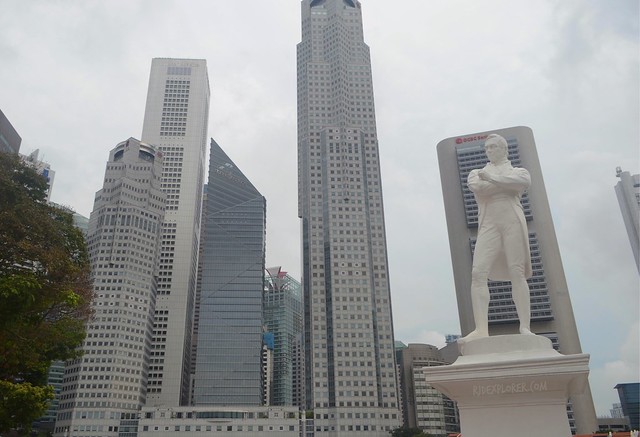 The statue is just few meters from the Singapore river where you can silently watch boats cruise the historic river. Famous river tours pass by some of the famous quays like Boat, Clarke, and Robertson.

Trailing the riverbank will lead you to the Asian Civilization Museum where you can view the Cavenagh and Anderson bridges. I had no time exploring the museum’s galleries but I’ve satisfied myself on some art installations on its front yard. “Forest of stone steles – Story of solar calendar” by Gu Wenda is an installation comprising 24 ‘ru’ stones in different sizes and shapes inscribed with Chinese characters that reference Chinese solar terms. 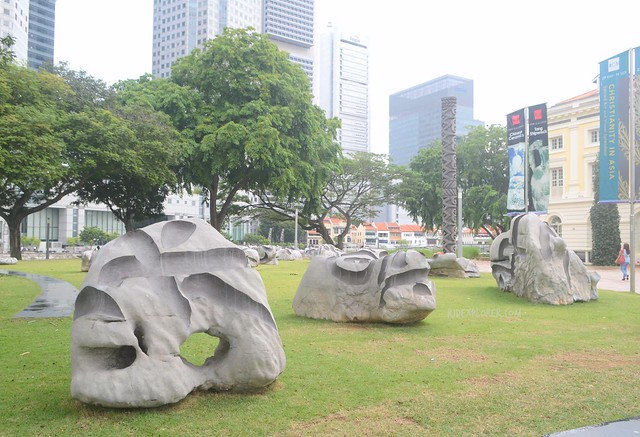 The other installation has several massive stainless spheres that provides quirky distorted images for people taking photos. Stone-throw away from the installations is the Cavenagh Bridge, the only suspension bridge in Singapore. The bridge prohibits vehicles weighing 3 CWT and above, including cattle and horses. Anderson Bridge was built few meters away as a vehicular bridge to address the limitation of the Cavenagh Bridge.

While crossing the Singapore river via Cavenagh Bridge, five naked boys are about to jump from the platform to the river. It’s an art installation by Chong Fah Cheong as part of Open Air Interpretative Centre project by the Singapore Tourism Board in 2000. The installation is in front of Fullerton Hotel facing the river. 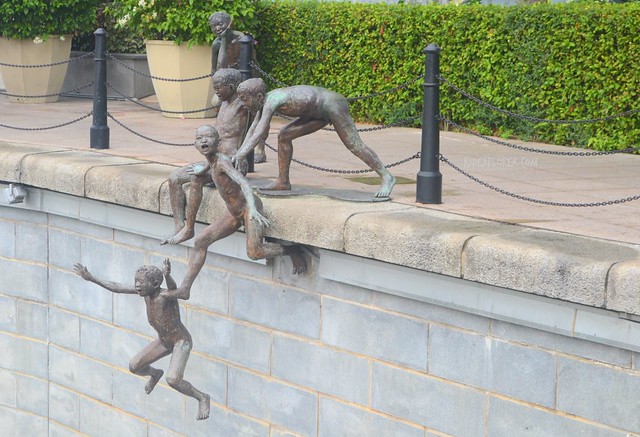 The long wait is over. The massive white sculpture spewing water to Marina Bay appeared on sight after I trailed few more meters from Fullerton Hotel. The horde of tourists overwhelmed me that got me irritated with the only reason of not getting a nice angle for a photo. These rabid tourists kept on blocking my frame every time I prepare to take a shot. On my search for a better angle, I discovered the baby Merlion about five meters away from mommy Merlion. 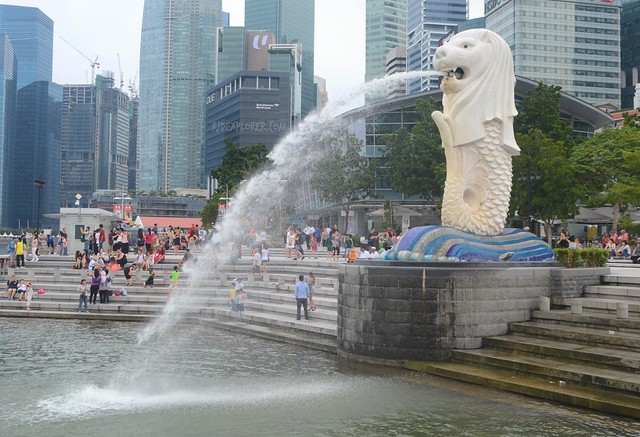 Most time on my short encounter with the famous landmark of the Lion City was spent sitting on the breakwater near the icon’s pedestal. After marveling on Marina Bay Sands, Singapore Flyer, ArtScience Museum, and Espalande, I decided to leave. I didn’t spend that much in Merlion Park as tourists kept on arriving and they became more aggressive in bringing irritations that can’t be subdued by anti-histamine. I continued my walk from that spot to Gardens by the Bay through Marina Boulevard. 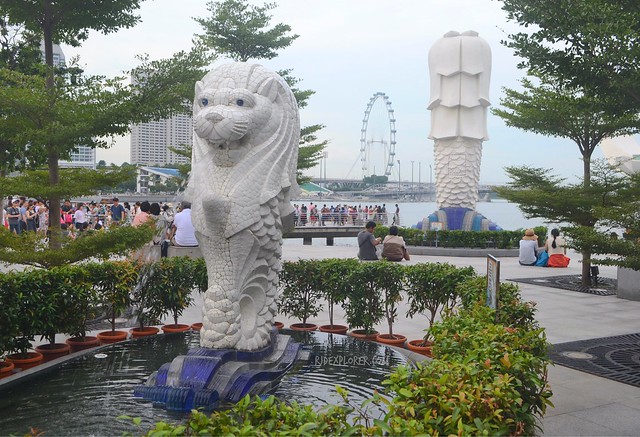 © 2017 RJDEXPLORER - All rights reserved.
Loading Comments...
We use cookies to ensure that we give you the best experience on our website. If you continue to use this site we will assume that you are happy with it.Ok