Encounter with the immigration officer from my arrival in Changi Airport still haunts me as I waited for the heavy downpour to stop. Winsland House became my shelter as I watched Singaporean kids, accompanied by their nannies, trail the rain-drenched sidewalks. I just ended my art trail at Orchard Road and scheduled to visit landmarks in Singapore’s Museum District.

Dark clouds that shadowed the area were already cleared when I treaded my way to Fort Canning Park. I got inside the historical nature park via the Clemenceau Avenue. On the other side of the avenue are Church of Sacred Heart, one of the oldest parishes in Singapore; Teochew Huay Kuan Building, a Teochew clan association in Singapore; and Sri Thendayuthapani Temple, one of Singapore Hindu community’s most important monuments.

I skipped the red-bricked stairs in a matter of seconds and arrived in front of a park’s marker and map. My wanderings brought me to the Fort’s Gate and its adjoining walls, which are the only remains of the fort, built on the hill between 1859 and 1861. The gate opens to a manicured lawn surrounded by several kinds of trees. The walk allowed me to pass by The Battle Box, an underground command center under the fort used as an emergency hub during the Malayan Campaign and Battle of Singapore.

Fort Canning Park has a garden called ASEAN Sculpture Garden. It has art installations by artists such as Anthony Lau, But Muchtar, Osman Bin Mohammad, and Vichai Sithiratn. Near the garden, after passing by one of the Gothic Gates, is the frontage of Singapore Pinacothèque de Paris facing an open lawn. Unfortunately, the private museum closed down before its first anniversary due to low visitorship. 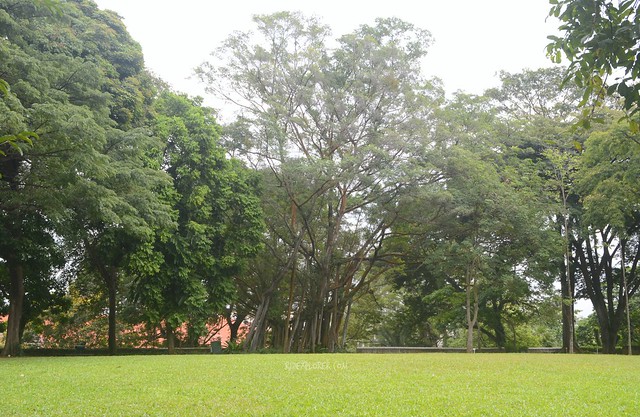 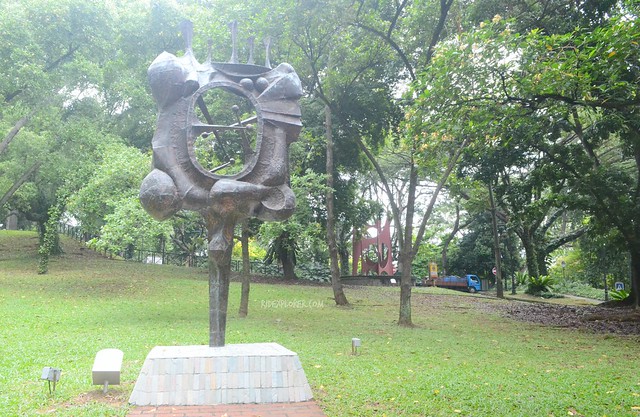 Larger than life sculptures at the back of the National Museum of Singapore are hard to miss when you exit from Fort Canning Park. The two sculptures are the largest red pepper in Singapore, Pedas-pedas by Kumari Nahappan and another one made of stainless steel and resembles a blossoming flower by Yeo Chee Kiong.

National Museum of Singapore is the oldest museum in Singapore and has a 2,800 square meters permanent gallery hall. If you intend to have an in-depth learning about Singapore’s history, the museum has a gallery where you can trace Singapore’s beginnings starting from the 14th century. The museum is open daily from 10AM to 7PM with last admission at 6:30PM. Ticket is SGD10 for foreign visitors (adults) and SGD5 for students, seniors, and persons with disabilities.

From National Museum of Singapore, I went down Coleman Street and passed by the National Archives of Singapore, Singapore Philatelic Museum, and The Masonic Club.

Distinctive architecture of the Central Fire Station will surely amaze every one passing by the building. Marvel on the white-striped arches, brick walls, red doors, and a watchtower. The station, built sometime between 1908 and 1909, was the first headquarters for the Singapore’s fire brigade. The structure marked the beginning of modern fire-fighting services.

Sneaking inside the station, I found out that it’s also a museum housing the Civil Defense Heritage Gallery. Good news is that admission is free. The in-house guide can tour you around but it’s easy to explore the museum on your own. First level has some fire trucks, narrates the development of fire-fighting, and other interactive demos like answering an emergency call on a vintage phone.

Still along Hill Street is the Armenian Apostolic Church of St. Gregory. Armenian community arrived and started to trade in Singapore in the early 19th century. This led to building the all white structure that was built sometime in 1835. Interesting areas of the church’s compound are the parsonage building, tombstones of notable Armenians such as Agnes Joaquim who cultivated the Vanda Miss Joaquim that was named as the country’s national flower in 1981.

Other landmarks in the neighborhood are Masjid-al-Burhani, Singapore Chinese Chamber of Commerce and Industry, and the famous Penarakan Museum.

More than an hour and I was able to cover a handful of historic landmarks in Singapore’s Museum District. With the short walk in Orchard Road to Fort Canning and ending it at Penarakan Museum, I liked how I spent the morning of my first day in Singapore. Starving, I went back to Purvis Street, where Hotel Kai is located, and found myself in Killiney Road restaurant where I easily devoured a plateful of Hainanese Fried Bee Hon.


Planning to visit Singapore anytime soon? Check out my travel guide, click on the photo below.