Ros, a colleague back in Cebu taking her post-graduate studies in Taiwan, decided to join us on our trip to Taiwan northern coast. Tight school works hinder her to visit these places even it has been nine months since she arrived. When she heard about my plans in visiting Taiwan, she extended her interest to join us. 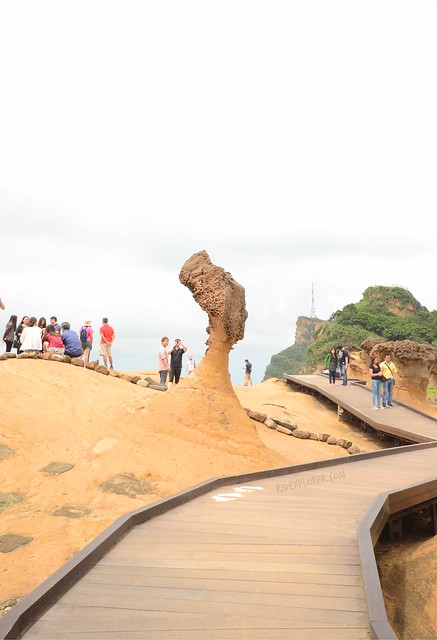 What I liked about Taipei is its accessibility to most of its tourist attractions. Public transports are readily available to bring you to their stunning gems. All you need to do is make your way to Taipei Main Station where most buses and trains connecting Taipei to other parts of the country.

An hour bus from Taipei West Bus Station – Terminal A and a NTD96 fare on our beep cards, we arrived on a road leading to Yehliu Geopark. Our desire to have breakfast in a cafeteria along the road saved us from getting drenched by the rain. We munched on dim sum and some burgers while the rain tried to exhaust its supply.

It was unfortunate to visit Yehliu Geopark during a holiday. That day was declared a non-working holiday in the whole city because of the dragon boat festival. We had to join a massive crowd of Taiwanese families in visiting the supposedly stunning and serene geopark. 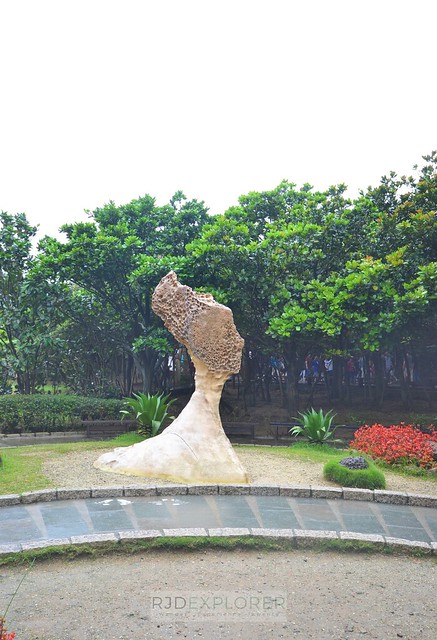 After paying NTD80 for the entrance fee, we accessed the turnstiles to the rock formations. We noticed some rock formations on the side and thought them to be the attractions. We had few snaps and noticed that there were fewer people stopping by. Reading the information engraved on the metal sheets, we found out that they’re only replicas. Dismayed, we continued to the actual formations. 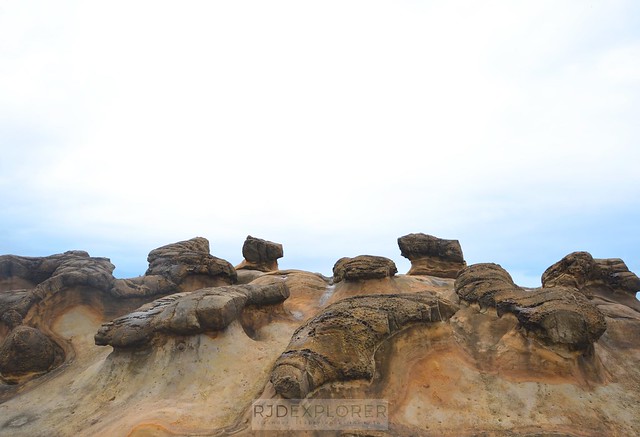 If by chance you grabbed a geopark information flyer, the different rock formations are enumerated and labeled. But most people stay on the central part of the park where the famous queen’s head is located. A wooden walkway was installed for tourists to easily access the other sections of the park.

The queen’s head rock formation is indeed remarkable if you find the right perspective. Geopark’s management is friendly enough to build a wooden walkway that provides the nice angle of the rock formation. But during our visit, there was an unending line of people who wanted to take a selfie with the attraction. Joining them was a foolish decision to do. We just roamed around and find interesting spots to have our own photo sets.

Sun finally peeked from the horizon and everyone stayed under the shades. But it was already late to kill another hour at the park. We grabbed fresh fruit juices and some deep fried goodie from the small market near the geopark’s gate before going back to the main road for the local buses bound to Keelung.

An insufficient balance on my Easy card forced the group to spend a few minutes in Keelung. I needed to load my Easy card to avail cheaper fares around Taiwan.

Keelung City is known as a harbor city. The city is known for its sheltered harbor. You can really feel that you’re in Keelung City because of the massive letters that spell out the city name. A Pinay eavesdropping our funny conversation interrupted us when we were puzzled by the bus number to Jiufen. 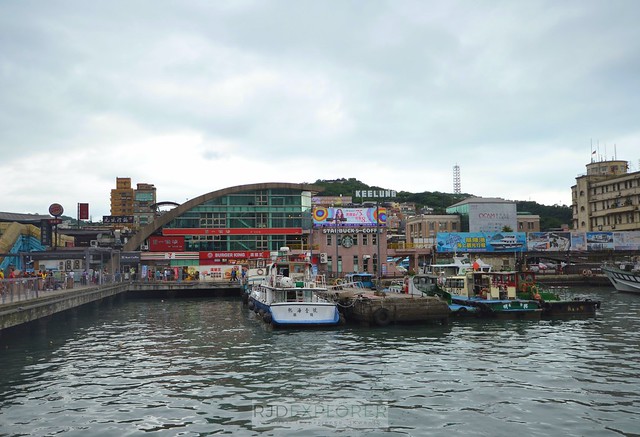 She was glad to talk and help four lost Filipinos looking for their way to Jiufen Old Street. She signaled us when the right bus number arrived. We boarded the public transport and bade goodbye to a helpful kababayan. We even asked her to join us on our Jiufen trip.

Same as the scene at Yehliu Geopark, Jiufen Old Street was jam-packed with locals and foreign tourists. The goal to enjoy the crowd-less and vibrant shophouses on both sides of the tiny alley wasn’t a success. However, braving the horde of people, shoulder-to-shoulder with several steps in a minute, was a funny experience. 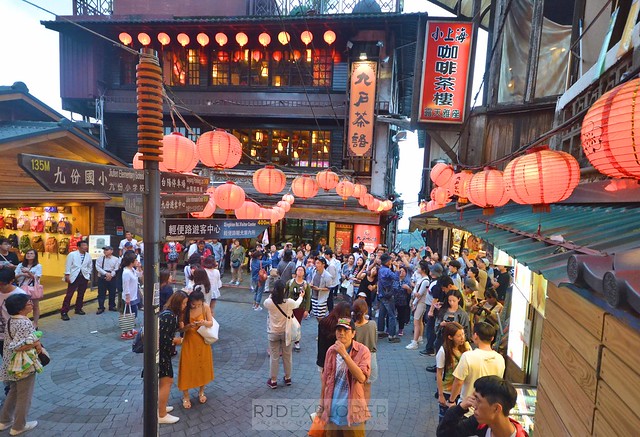 It was around 6 when we started to join the heavy foot traffic in Jiufen’s Old Street. Starving stomachs already made their presence felt. We decided to look for the famous beef noodles as suggested by Ros. The first stalls luckily serve piping hot bowls of beef noodles so we scrambled into the shop to look for seats. It was a filling meal to start our discovery of Jiufen’s interesting history. 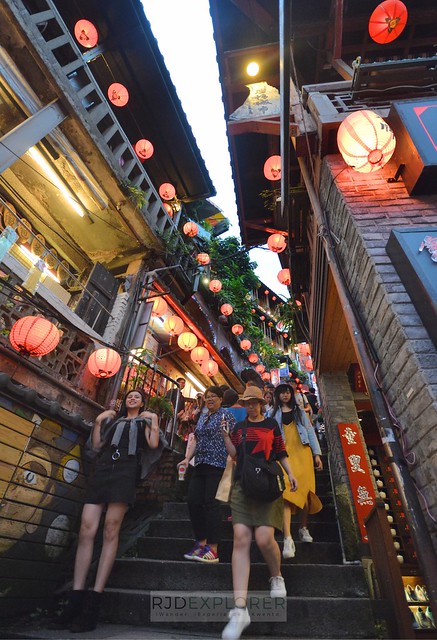 When we regained few energies with the bowl of noodles, we threw ourselves back to the stream of people. Most stalls, selling different items from crackers, dim sum, tarts and other pastries, offer a free taste to everyone. The noodles we had wasn’t meant for dinner but picking and trying food from the free taste plates made us full on our walk along the historic street.

The group had one goal on that afternoon, to look for the house that inspired the movie Spirited Away. We asked some vendors but the directions they’ve provided seemed wrong. Postcards are everywhere so we looked for the image and ask the vendor for directions. Thankfully, our dollar spent on the postcard is worth-it because the lady gave us the right direction.

Jiufen is a mountain town on the northeastern coast of Taiwan. It was a decommissioned mining town originally built by the Japanese during their stay in 1893. With the Japanese occupation, you can still perceive the Japanese influence on the architecture and culture of the town which remained untouched since the old days. Now, visiting Jiufen Old Street is a usual day trip activity for most tourists touring around Taiwan. 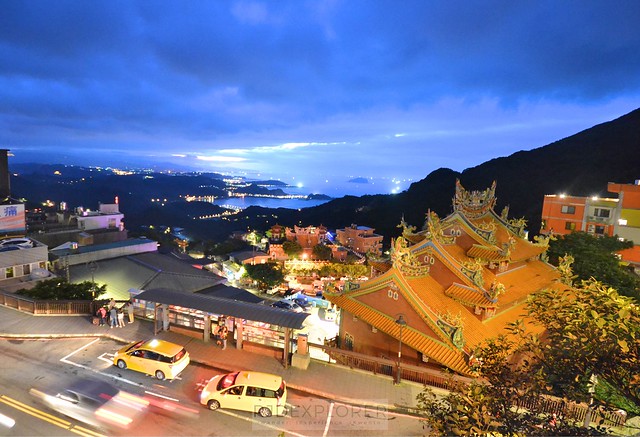 It was a tiring day in Taiwan northern coast but we still needed to get back to Taipei. With the massive crowd, getting a seat on a bus back to the city was indeed a challenge. Joining the queue for almost an hour, we found ourselves sleeping inside an air-conditioned bus back to Taipei. Around 11 in the evening when we got back to our hotel. Definitely a long and tiring day on our Taiwan itinerary.