Our hostel is only a few blocks away from the songtheaw (red taxis) terminal heading to Wat Phra That Doi Suthep. Few foreigners were already queuing and waiting for the next vehicle when we arrived. The dispatcher asked and confirmed tourists availing the service and convincing everyone to pay for a roundtrip fare.

The guy was really persistent in letting us believe that passenger taxis going back to the city are only available up to a certain time. And if we won’t avail the roundtrip service, we would end up walking. Some of the westerners fell on his booby-traps and paid a return fare. We insisted for a one-way ride and just paid him 50THB when he tried to collect the payment.

Wat Phra That Doi Suthep is one of the main reasons why tourists scale the mountain. From the base, you can reach the temple on top of Doi Suthep using a tram, for a fee, or via the 309-step Naga stairs. Few meters from the base of the stairs are booths selling souvenirs and snacks.

At some part of the way are cute little girls greeting and welcoming tourists arriving at the temple. They’re part of a small ethnic tribe in Doi Pui, few kilometers from Doi Suthep. These charming kids wear their traditional Hmong tribe costumes, sing and dance while tourists pass by them. Their presence at the temple is not for begging but for them to promote the local ethnic culture. I approached one of the kids for a picture and she was too giddy dancing while I sat beside her for a photo. I’m not sure if it’s fine but I handed her a Thai coin for some snacks.

We continued our ascent and facing the obstacles of the people going down. Going up is not that difficult as trees covering the area make the stairway cool and airy. Be sure to wear a proper dress code on your visit because the temple is a sacred place for Thai people. Settling a 30THB will allow you entry inside the Wat Phra That Doi Suthep temple. 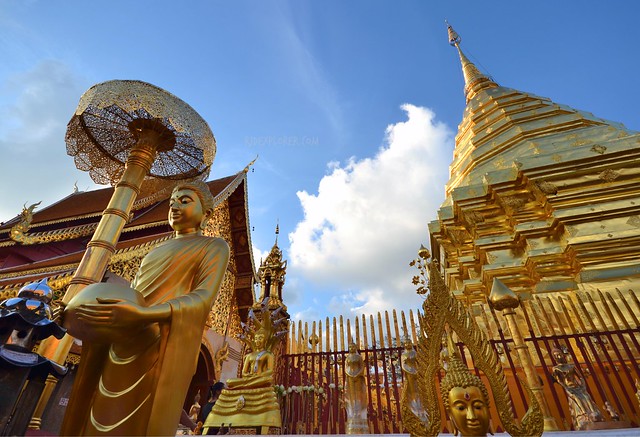 Before entering the main temple, take time to navigate around Wat Phra That. Counterclockwise from the entrance, you can meander on few more wiharn, a place to shrine Buddha images. The viewpoint, on a clear day free from haze, suggests a majestic view of Chiang Mai city and the Chiang Mai International Airport.

A short history, Wat Phra That Doi Suthep was built in 1929 during King Phaya Kue Na of Lanna Kingdom on the Meng Rai Dynasty. Every one entering the main temple, surrounded by a closter, is required to remove their footwear. This is to respect the relics of the Buddha enshrined in the temple. Locals visiting the holy place offer prayers on several Buddha images near the golden pagoda. Others continue their solemn journey by circling around the chedi. 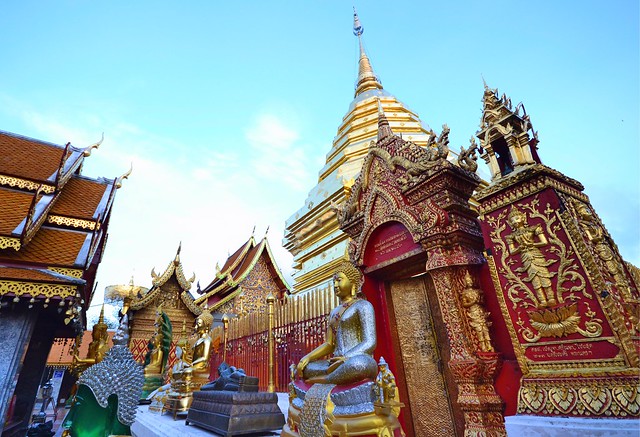 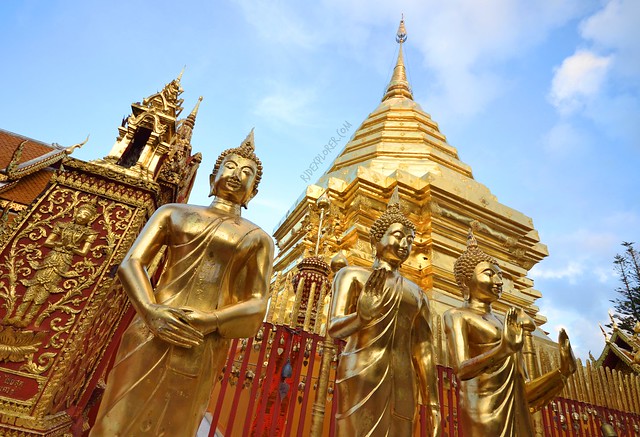 Apart from the closter, several Lanna-designed chapels with intricately carved facades and red-tiled roofs surround the golden pagoda. Add to that the different-colored Buddha images on various poses: on lotus position like meditating, earth-touching, and the repelling the ocean where the standing image has its hands raised and facing outwards. Two wiharn are on the opposite sides on the main deck of the temple.

Around 8PM, everyone inside the complex was asked to sit on the floor. I was busy taking mesmerizing sights of the entire temple sprawling from the blue-hued horizon. All monks went out of the main wiharn and faced the golden pagoda. Afterwards, the chanting started. It was an otherworldly experience to hear such chanting especially if it was your first time. The monks then proceed inside the main wiharn and continued the sacred ceremony.

Since it was already late and for us not to walk our way down from Doi Suthep to the city, as what the dispatcher tells everyone, we headed to the cable car. Yes, another option to go up or down the temple is thru a funicular cable car for 20THB per way. Luckily, in contrast to the dispatcher, red songtheaws parked just outside of the Wat Phra That wait for tourists heading back to Chiang Mai City.

If Chiang Mai, Thailand is part of your itinerary, I recommend a visit to this temple. Wat Phra That is only one of the destinations you can check out within Doi Suthep National Park. Others consider dropping by Bhubing Palace, and waterfalls like Huey Kaew, Mon Tha Than, and Dtaat Mook.

KRABI | Pop-in Hostel and the Islands of Thailand

10 Reasons You Should Teach English in Thailand