Bus trip from Chiang Mai ended in Prasopsook Road in the center of Chiang Rai, still in Thailand. We were like Ninja Turtles struggling to carry our backpacks. Doi suggested of availing tuktuk rides for 20 baht each. I, on the other hand, ensured that Happynest Hostel is just 300 meters away from the terminal. With our bulky bags, the distance seemed forever to cover. We had only 24 hours in Chiang Rai, Thailand and no itinerary or idea of destinations available.

Several deep breaths and we reached our accommodation. We settled in our room at the cozy and natural ambiance of Happynest Hostel. Our rumbling stomach forced us to get out and look for a place to eat. A restaurant selling meals written in Thai was the nearest spot we could get. Having no idea on the food, the photos on the menu served as our guide. We did a recharge and were already ready to explore what Chiang Rai has to offer.

With the desire to visit more attractions in Chiang Rai, we decided to drop by a travel agency along Prasopsook Road. After haggling a six-hour tour for 1300THB, we hopped on the personal car of the owner of the agency. She volunteered to drive us around that let us consider it an easy money for her that day.

Few kilometers south of Chiang Rai proper is a temple tagged as White Temple because simply the entire structure was painted with white. Guests need to pay a 50THB fee to enter and enjoy the vicinity.

Once you enter the main entrance, staff will hand you a plastic bag. At first, I was clueless as to why they were handing bags to everyone entering the premises. It was late for me to notice that it’s for the footwear. Visitors need to take off their footwear and just walk on the bridges, floors, and hallways of the main temple, barefoot. 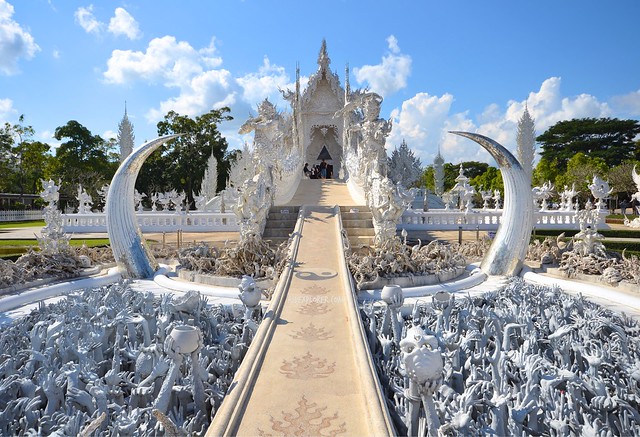 From afar, the white temple stands out from the sprawling landscape and vibrant horizon. Up-close, be stupefied by the intricate details from the structure’s front yard, bridge, porch, and main building. Sides of the bridge have these concrete outreaching hand sculptures which are kind of scary apart from the curved horn-like thingies. Next are two Kinnara, half-human, half-bird, a creature from Buddhist mythology.

Ubusot, the main temple, offers another set of stunning walls and roofing. Unfortunately, taking photos inside the temple is strictly prohibited. Before taking the exit of the main temple, snap a shot of the side of the ubusot for a different angle. A golden building still has intricate details and will show up after you traced your way to the exit. While others proceed to their next destination, I explored the compound and even found another smaller white structure.

A bit farther from the city center is a museum known as Black House. Baan Dam Museum is a work of art of Thailand’s National Artist Thawan Duchanee. The museum-slash-village transcends the style of the artist that basically deals with Buddhist values. The black house is elevated from the ground, one of the unique features of Lanna architecture.

For the interior, regularly-spaced windows and high ceiling produce and add a shadowy effect on photographs taken inside the structure. Some of the columns and wooden planks have meticulous woodworks and carvings. In contrast to the Wat Rong Khun, the black house has a lot to offer. In fact, you can exit the main structure and explore more ‘art installations’ within the compound at your own pace. 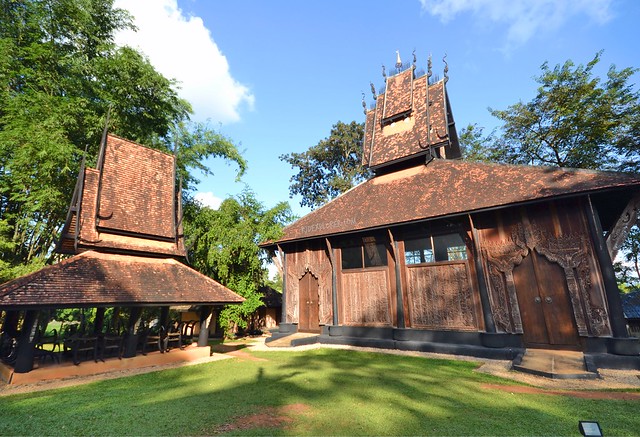 Leisure walk on the entire compound, under the shades of towering trees, will let you marvel at more traditional Thai houses. Few structures on the far end are dome-shaped buildings and a submarine-shaped, more of a rhino, that is regrettably not open for viewing. If tourists equate white temple as heaven, the artistry that Duchanee created allows guest to compare it to hell. The attraction doesn’t require a fee during our visit but I heard the management already started collecting an 80THB fee.

This destination wasn’t on our list and was only suggested by our guide-cum-tour agency owner. We gave it a yes when she said it was along the way and can still be squeezed on our itinerary. Wat Rong Suea Ten is still not widely promoted so there are fewer tourists compared to both white temple and black house.

As its name suggests, the temple is painted with blue with its roofing gold. The façade is aesthetically beautiful with the catchy combination of blue and gold colors. The temple was built in 2006 on an abandoned temple having tons of bricks. In 2008, the white Buddha standing at a height of 6.5 meters was constructed and serves as the main image in the chapel. Walls and ceilings inside the building are also painted with blue and gold.

On both sides of the chapel are Kinnara, still in blue color, with one has its hands at the back of his head and the other holding a staff. At the back of the main prayer room is a standing Buddha and fronting it is a stupa separated from the main structure. There’s nothing to do more at the Blue Temple and indeed best for a shortstop.

It was already seven in the evening and yet the sun was still up on Chiang Rai’s horizon. This meant that we could drop by one more attraction before the day ends. During our visit, Wat Huai Pla Kang still has several sites under construction. But evident is the multi-layered temple that we were too lazy to explore, a white temple, and the big Buddha. Wat Huai Pla Kang is on a hilly part of Chiang Rai and these three structures were actually on top of adjacent hills.

There are no entrance fees being collected but there was a vehicle that brings visitors to the base of the big Buddha. The Buddha is comparable to the one in Hong Kong with the exclusion of its color. We didn’t get the chance to scale the Buddha using the elevator that will get you up to the 25th floor. On recent photos, they already started to build stairs from the parking area to the base of the Buddha.

Sun was slowly taking over and we asked our guide to drop us somewhere we could get a nice meal. Time to move away from street vendors. She then suggested to drop us near the Chiang Rai Clock Tower where several restaurants cluster within the junction. She also added that it was already a great time to stay near the tower because they usually turn the light on around 8 PM.

Seeing the clock tower the first time, I instantly reckoned that it’s an extension of the golden building we saw at Wat Rong Khun earlier that day. The golden color of the tower got more vibrant when lights started to illuminate it.

Few blocks from Chiang Rai Clocktower is the night bazaar. We had regrets in staying away from street food so we continued trying some local fares. If you’re planning to have souvenir shopping, then Chiang Rai night bazaar is a perfect one to have it. It’s not that wide and only utilizes some alleys and compounds that you can roam in ten minutes. This is a great opportunity to go around and look for the cheapest rates before getting one.

Our love affair with Chiang Rai was really intended for a short one. But our decision to avail a tour, plus the late sunset in this part of the world, allowed us to explore more destinations than expected. With this set of tourist attractions, we still despised ourselves for allotting a limited stay in this northern province of Thailand. Definitely a great reason to come back.