Capiz is a province that is not on my list of destinations to visit alone. But because a dumbass traveler booked a flight a day prior to the Antique Heritage Tour, I was forced to find a place in Panay Island to spend the day. First choice was actually Isla de Gigantes in Carles, Iloilo but considering the time to go back to Iloilo City the next day, I disregarded the destination. Second choice was to go to the nearby shifting sandbar of Concepcion, Iloilo, but boat rent doesn’t fit my budget, again dropping it on the list.

I was left with Capiz. I was really hesitant (I bet you know why) if I will be going to give the idea a go. Since I had no choice, en route to Iloilo City proper from the airport, I immediately searched some list of attractions to see in the province, particularly in Roxas City.

After an hour, I was already sitting inside the van with the driver recklessly taking the Iloilo to Capiz road. And before noon, I was standing in the temporary terminal of Roxas City as I looked for tricycles bound to the city proper. Chaos surrounds the area so I eagerly hopped on the first tricycle leaving the terminal.

“Beehive Inn,” I mumbled to the old man maneuvering the vehicle. He overcharged me at Php 20 fare when I found out that it’s only 15. I chose to stay in Beehive Inn since it is the only option around my budget. Rooms are decent for the rates. I availed the room with common bath (Php 300/night) but to my surprise, one of the windows of the room was broken. I decided to transfer and get the only vacant room, with own toilet and bath, and a TV for Php 380. 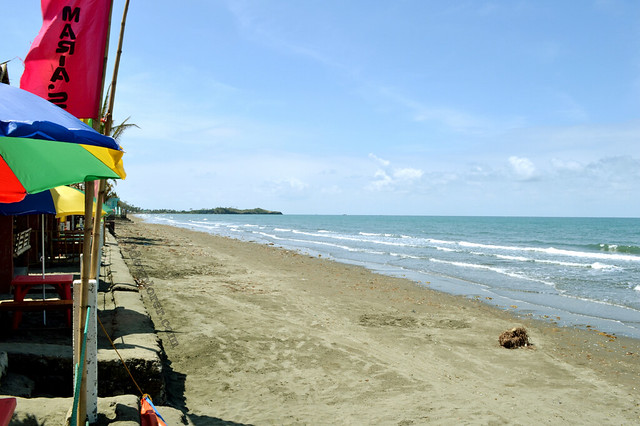 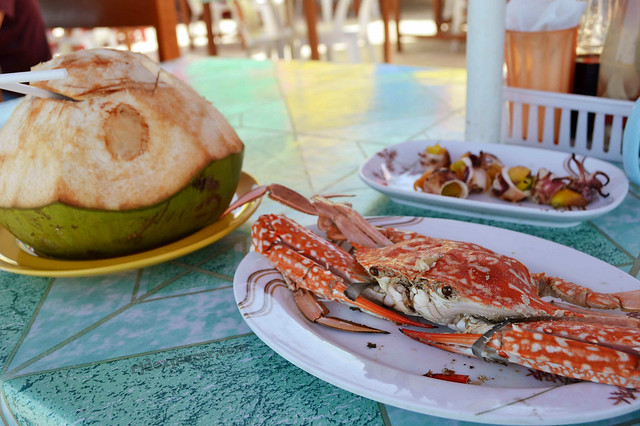 Baybay Beach (left) which is known for affordable seafood (right).

Right after I settled my things in the lodge, I took another tricycle ride going to Baybay Beach, the famous beach in the province for offering a wide array of seafood. I went through the kiosks on the left side of the People’s Park to survey the prices. Most orders are for groups.

The second stall suggests some smaller servings so I ordered a medium-sized crab, a grilled squid, 2 cups of rice and a fresh coco juice. Since Roxas City is tagged as the Seafood Capital of the Philippines, I expected that seafood is cheaper here than any place in the Philippines. I was wrong to find out that the grilled squid and crab costs Php 125. 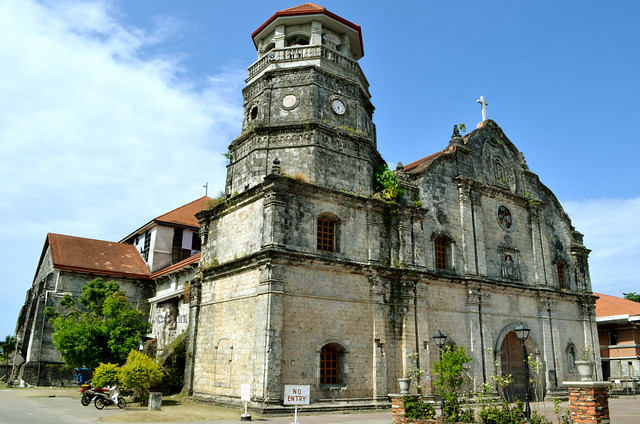 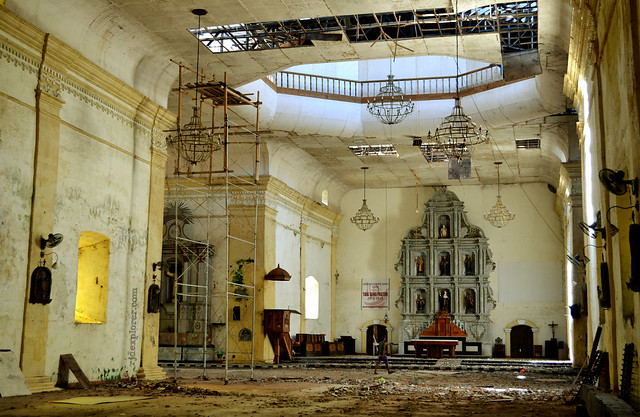 Facade of Church of Pan-ay (left) and the devastated interiors of the cathedral (right).

Soaring coconut trees border the People’s Park that provides a cool setting with its location next to the sea. Nearby island of Olotayan can also be seen from here. I spent the next hour in the town of Pan-ay where I saw the devastation left by Typhoon Yolanda that struck the area last November 2013. The interior of Church of Pan-ay was totally wrecked by the calamity leaving dilapidated ceilings and walls. I am still glad that the façade of the church withstood the catastrophe.

From Pan-ay, I went directly to the ancestral house and exact birthplace of President Manuel Roxas. Unfortunately, the owners aren’t allowing visitors to enter the premises anymore. Trailing the streets led me to the city’s bandstand that serves as a place for the people to come together and unwind. 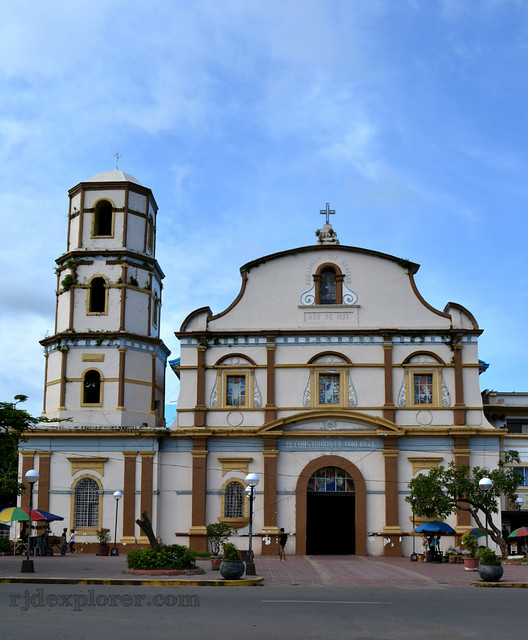 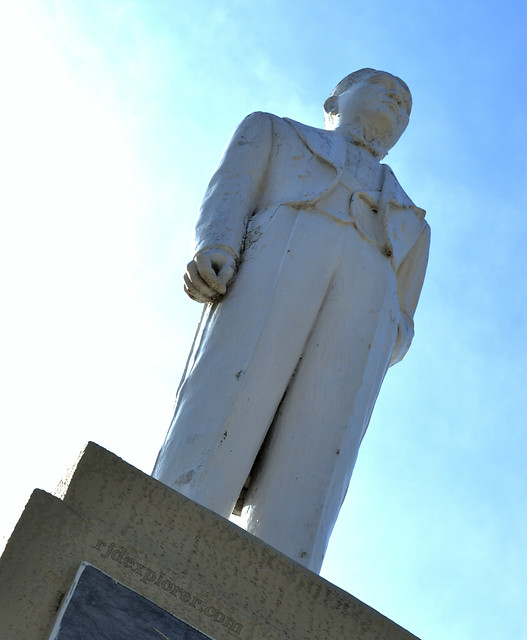 Still in the city plaza are the city bridge built in 1910, the likable structure of Capiz Provincial Capitol with a fountain that serves as rotunda for motorists, and the Immaculate Concepcion Metropolitan Cathedral on the other side of the road. On the rear part of the road stands a monument dedicated to President Manuel Roxas, whom the city was named.

Last attraction I had checked was the Ang Panublion Museum, which was originally a circular water tank that was converted into a museum. I found out from a museum attendant that Panublion is a Hiligaynon term which means “guardian of precious things.” Some of the interesting items to check in the museum are the vintage 1940 cameras and Budyong, a carabao horn being used to signal danger or alarm. 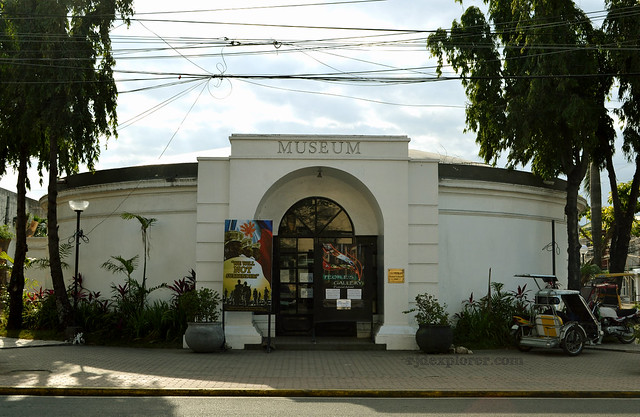 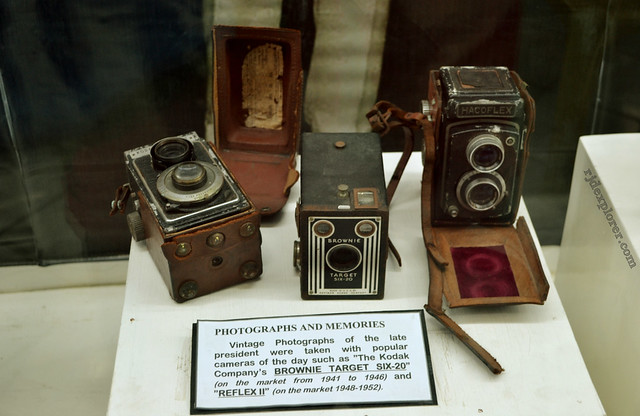 Ang Panublion Museum and some items to check out.

My solo day tour in Capiz was ended by walking along the streets of the city going back to Beehive Inn. The unexpected trip on this part of Panay Island was really rewarding as I got to enjoy some destinations not being frequented by tourists. Capiz is well worth a visit to see and discover its unexploited attractions than just avoiding it due to the superstition that was never proven.