Finally, after exciting all people with that “soon to open” tarpaulin in SM City Cebu, Vikings Luxury Buffet already landed in the Queen City of the South. Weeks before April ends, a sponsored ad in Facebook appeared on my timeline, their page started announcing their opening planned a day after the scheduled presidential elections. With some personal stuff and a company event that occupied most of our time, we didn’t manage to try the famous buffet days after its opening. 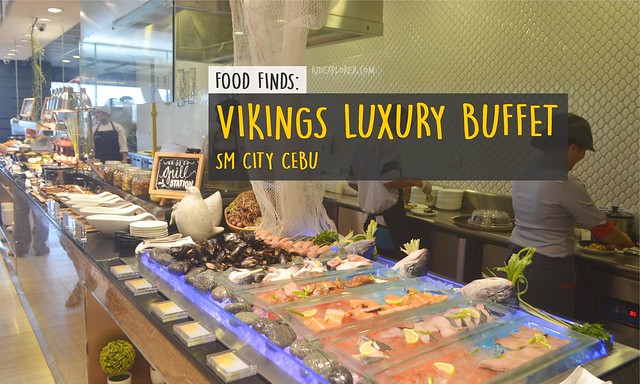 June is my birthday month and with Vikings offering promos, we did see it as an opportunity to visit and experience the much-talked-about buffet. On the other hand, a social media promo gives everyone 25% off on the regular rates when you follow their Instagram account. With us working in a research company, we did the math and it’s more affordable than availing the birthday promo because we still agreed to split the cost equally.

Our first attempt at posting a reservation failed so we scheduled another day a week after. Lunch buffet starts at 11 AM and there were already a lot of groups sweeping the numerous stations but a quick glance at the different spread reassured how generous they were in quickly refilling the stations.

Before grabbing a plate and stuffing items on it, I surveyed the area and counted the stations, there are 17 of them (or even more): Chinese, Shabu-shabu, Lechon de Cebu, Grill, Filipino, Japanese, Korean, Carving, Bread, Greek, Tex-Mex, Pastry/Dessert, Fondue, Fruits, Cheese and cold cuts, Italian, and Beverage. As usual, carving station has the longest queue while tempura section of the Japanese station requires the longest waiting time.

I started my meal with the typical plateful of sushi rolls. With a dozen assortments, they decided not to put a label on it. The area offering sashimi was flanked by the sushi roll plates; maki and nigiri on both ends. You can find on the other side of the Japanese station fried dishes such as tonkatsu and tempura, while on the nearby section are other stuff like tepanyaki.

Next station I stumbled upon was the Chinese station with all the steamer baskets containing wicked dimsum like chicken siomai, chicken chili siomai, pork siomai, beef siomai, sharksfin, and chicken feet. Oriental food is located in the adjoining area with the fish fillet, buttered shrimp, spicy squid, and Peking duck (not sure) making their way on my second plate. 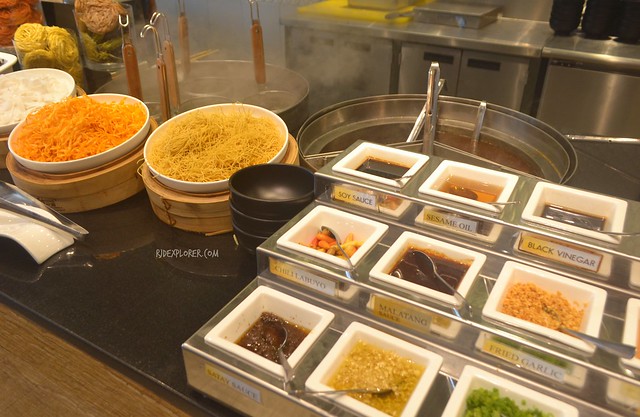 My tummy was already sending some signals of being full but I was persistent to continue. I will be a loser if I won’t try the succulent meats at the carving station. Gigantic slab of US Beef entrecote, garlic and rosemary studded leg and lamb, and juicy roasted chicken wait for everyone on the queue. Sides to complement the tender meat such as marble potatoes and roasted veggies can be scooped while waiting for your turn. Strips of the medium rare steak can be paired with four available sauces: roasted mixed peppercorn, smoky barbecue, gourmet wild mushroom, and orange raspberry. For me, the classic peppercorn gravy was still the best. 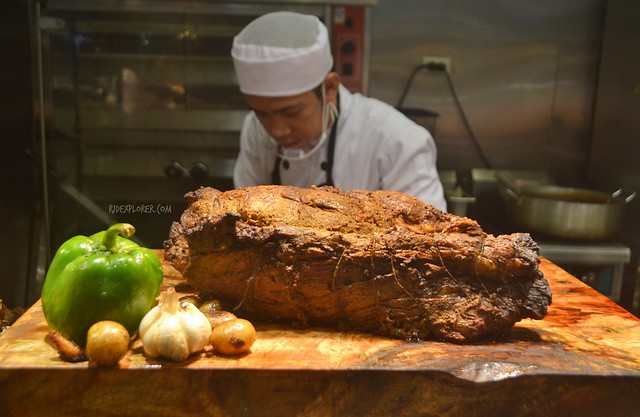 We were told that lunch buffet has no lechon and crabs. I was giddy when I saw a block of roasted lechon belly near the grilling station. That, with grilled mussels, blue marlin, tuna panga, and salmon bones, and a mixture of other seafood from the Filipino section, completed my Filipino plate. With Cebu known for good lechon places, I didn’t have high expectations with Vikings’ take on the Cebu staple. Mind you, the skin was so crunchy and I liked the flavor of the meat especially when dipped in spicy vinegar. Forget all items on the grill station except for the tuna panga which was so soft and sweet; signs of freshness of the fish.

My overgenerous meal was paused when the group of staff and crew of Vikings started to roam around the dining halls. Happy birthday song started to blurt out in the entire restaurant with a crew, in his Viking costume and carrying a “Happy Birthday” sign, led the whole crew. Others followed him while handing cakes to all birthday celebrants, I also received one. Every crew lined up and danced that made all diners take a break and enjoy the simple presentation. 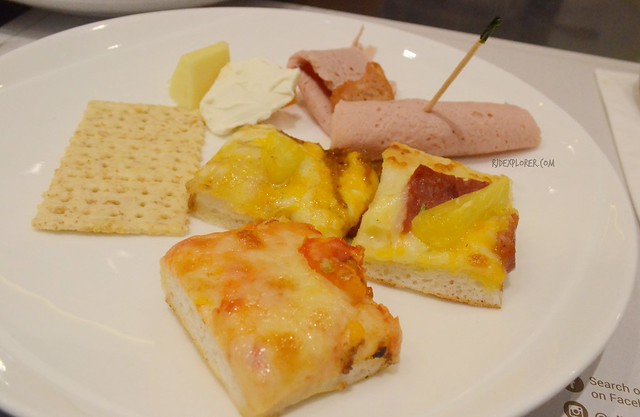 The food escapade continued with the Italian station. They have three pizza flavors, a section for do-it-yourself pasta, I supposed, together with the cheese and cold cuts on the other side, as well as croquettes and bruschetta.

The tiny space left on my tummy was reserved for desserts. They have a wide array of selections but I think Vikings in Davao has a greater and better spread of sweet delights. I got some cakes like calamansi-mango cheesecake, butterscotch bars, lemon meringue, rainbow jello, crepe with a scoop of strawberry ice cream, and some fruits and mallows with fondue. Yoghurt sundae was also available but I wasn’t able to try it. For Independence Day, a section of the station offers Filipino rice cakes such as kutsinta, sapin-sapin, biko, and cassava cake.

Ten dispensers were present to quench diners wanted to try some lemonade, juices, and iced tea. Cucumber Lemonade is a must everytime I dine at Vikings but I discovered a new drink that you should try on your next visit, the Minty Lemon Lime. The drink has mints, lemons, and limes in soda water mixed with 7up. Pepsi products are also available together with Milo freeze, and draft beer. For people who are on a detox process, they have fruit-infused waters. 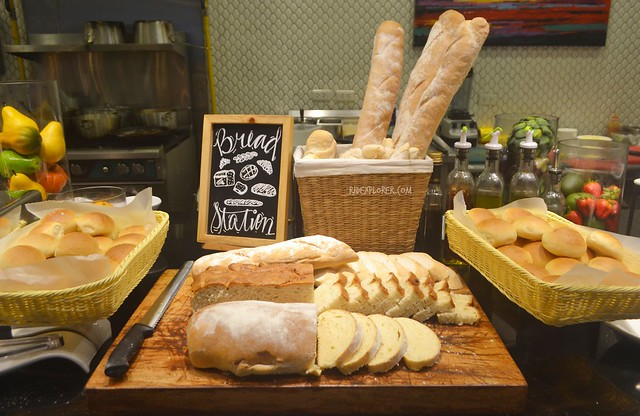 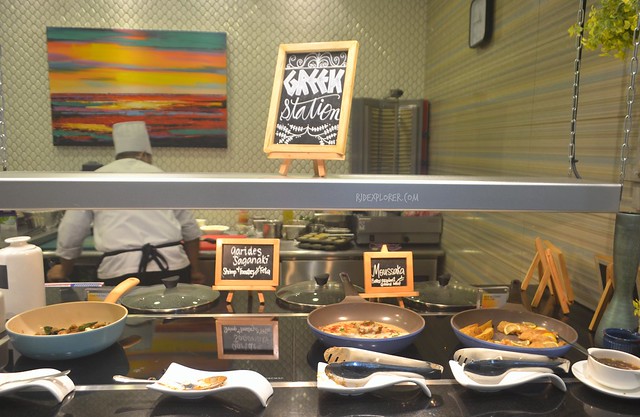 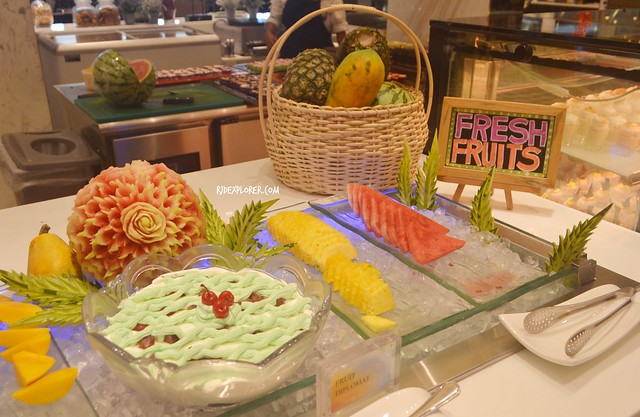 There were some stations I never got the chance trying like the Greek for its saganaki and moussaka. Bread and fruits also didn’t make it on my plate; add to that bowls from the shabu-shabu section, and some from the Korean station. A friend told me that the stir-fried noodle available in the Chinese station was also good, reasons to go back. 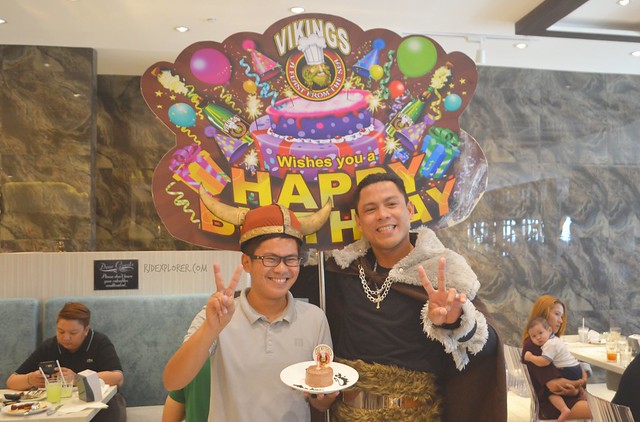 Vikings Luxury Buffet, at any location, never fails to satisfy my appetite on every visit. For you to try and enjoy every bit of the more than a dozen stations, it’s better to just get small portions of the food to know what items, out of the tons of offerings, fit your cravings. It’s also the quality of food, as well as service, they offer that matters the most. Buffet rates below:

* Prices are subject to 5% service charge.