At around 4 in the morning, whole Cagwait was still drenched by the downpour. With my limited internet connection, I wanted to check how the weather will develop on the next few hours. I surrendered and just relied on my friends back in Cebu who sent me updates on the conditions. Britania Islands was next on my list and I was still not confident on how I’ll be going to explore the place, budget wise.

The Php1500 standard rate of boat that is being offered by the tourism office is a far cry from my intended budget. I remembered that I saved a number of a contact in Britania and tried sending him a message asking if he has a tour I could join on that day. He immediately replied and asked for my budget, Php500 is the maximum I can shell out.

He sent me back details on how I can find him in Britania. After a sluggish bus ride from Cagwait to San Agustin, I hopped on a habal-habal and to the driver, I said that I’m heading to Rudy Quinonez’s house. Kuya Rudy, the father of Nick, is a boat operator in Britania and quite known in the area.

Nick already started the tour and the group was already enjoying Hiyor-hiyoran Island when he fetched me at the port. This was where a solo traveler started gate crashing a family reunion-getaway. It was gloomy when we docked on the island but the white sand beach stands out from the clear water. There are around three dozens of coconut trees on the left side of the island. Hiyor-hiyoran is the usual first stop of the island hopping tour in Britania.

Members of the family started to board the boat while I was taking photos. We left Hiyor-hiyoran after few minutes and the guys began filling their disposable cups with beer, Red Horse to be exact. They offered me a drink but since I haven’t had a decent breakfast that time, I declined.

Next island is the famous Naked Island. Same with Naked Island in Siargao, it has no vegetation and simply a lump of powdery sand. When we docked on the bare atoll, some people went down but most of them stayed on the boat because of the harsh waves hitting us. I was on the far end and when I was on my way down the boat, the head of the family decided not to spend more time on the island and proceed to Hagonoy Island instead.

Hagonoy Island, on the other hand, has the longest stretch of beach for all the islands we’ve visited that day. It’s the farthest island on the tour and comparable to Hiyor-hiyoran Island with its shoreline extended. At the far end of the island is a cluster of trees that serves as shades for tourists. Walking on the fine sands and getting a tan while allowing the harsh sun to burn your skin are perfect things you could do on the island. Waves are a bit strong sometimes, so be very cautious when you tend to swim in the clear and cool waters surrounding Hagonoy Island.

Boslon Island, the last island for that day, is the usual endpoint of the tour. Here, tourists are allowed to munch on their food and have a picnic by the beach. There is a small grotto of the Virgin Mary on one side of the island. The mass of sand is an idyllic spot for sunbathing but sometimes dominated by docking ropes. During low tide, a sandbar connects Boslon to the nearby islands of Panglangalan that allows everyone to visit the other islets.

Hiyor-hiyoran, Naked, Hagonoy, and Boslon, are only four of the 24 islets of the Britania Group of Islands. The strips of beach on these islands are comparable to some famous beach destinations in the country, lesser crowd and minus the developments. Some of these two-dozen islands are uninhabited and open to the public. Once you settled the tourism fee, there are no more entrance fees to be paid on the islands. 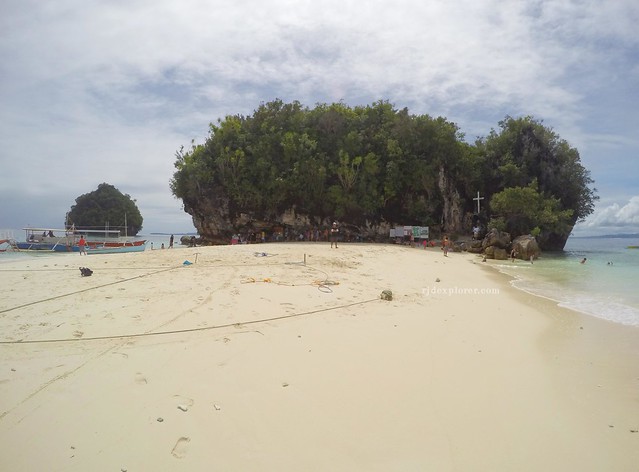 For island hopping tour, you can contact NICK QUINONEZ at 0915-174-5145 or 0929-958-2345. The tourism of San Agustin offers a standard rate of Php1500 for the island hopping. The boat can accommodate up to 15 persons. When you’re in a small group or solo and Php1500 is far way off your budget, Nick sometimes entertains joiners if ever the group he will be accommodating is willing to allow other people to their group, if not, he will give you a discount.

HOW TO GET TO BRITANIA ISLANDS

From Tandag Airport / Tandag
Make your way to Tandag bus terminal where Ceres buses are available, fare is Php20. Take a bus either bound to Butuan or Davao, and tell the bus crew to drop you in Salvacion Junction in the town of San Agustin, fare is around Php80. From junction, you can ride a habal-habal to the jump off point.

From Hinatuan
Make your way to Barobo Terminal, van fare is Php50, and from here you can hop on a bus bound to Tandag City and hop off the bus at Salvacion Junction in San Agustin.