We overslept for the nth time; blame it to the chiropractor-approved mattresses of Microtel Cabanatuan. Climbed out of bed, fixed that out-of-bed hairdo and did some gargle before catching the ride for that day. Byaheng Nueva Ecija 2014 was already ended; however, five outdoor enthusiasts extended their stay in the province to visit Gabaldon Falls.

It was Sunday and heading back to Manila was a meek idea. Everyone decided to maximize the weekend. We wanted more adventure and explore the off-the-beaten sites of Nueva Ecija. Kuya Ramil of Pinas Muna had the idea to visit a waterfall in the province. He found it out in a magazine handed down to every participant of the recently concluded familiarization tour.

Again, for a couple of times, who would’ve thought that an attraction such as a waterfall exists in the province that is known for rice fields, and more rice fields, perhaps? Thanks to Sir Phil, owner of Liquid Bar and Resto who allowed us to use his van and joined us on our trip to Gabaldon Falls.

Gabaldon Falls is located in the municipality of Gabaldon, Nueva Ecija. It is 2 hours away from Cabanatuan City. In the middle of nowhere, the moment the vehicle reached the peak of a hill, the driver stopped and told us that a view deck is available in El Pobre Viewing Deck Overlooking and Leisure Place. The area offers a view of the vast plains of Nueva Ecija as well as Mount Arayat on a clear day.

The road trip continued with the mountainous part of Nueva Ecija being viewed on both sides of the road until we reached a bridge having the Dupinga River on sight. We were enticed to go down the vehicle by the jaded river water underneath it.

Afterwards, we found ourselves inside the compound of the Nueva Ecija University of Science and Technology Gabaldon Campus, the gateway to the Gabaldon Falls. We paid the Php 20 per head for the environmental fee and Php 100 for the local guide. Threshold of the eco-park has some cottages and pools that were dappled by tall acacia trees. The 30-minute trek took us almost an hour because we enjoyed capturing the rapids of the water on the stream.

Going to Gabaldon Falls was one of the best trekking-to-a-falls experiences I had so far. It involves crossing numerous makeshift but sturdy bamboo bridges with few already submerged in the water and will require everyone to cross the stream. The water that is coming from the waterfall, in reality, is cool and balances the scorching weather. 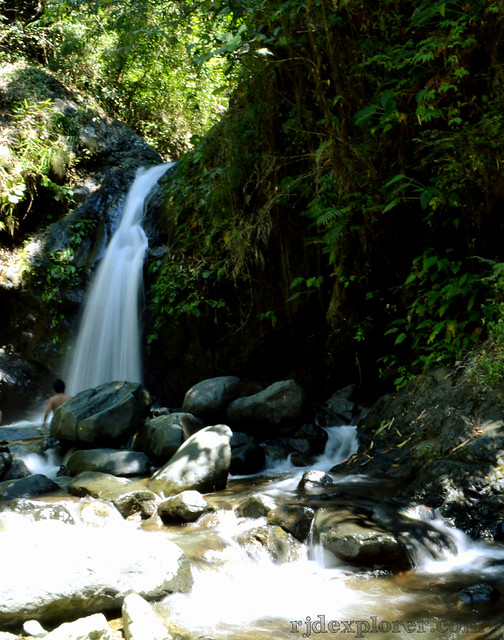 Since it was a Sunday, we already expected a crowd of locals in the area. In fact, we met some of them along the way. Although the falls didn’t get my attention right away, I was able to appreciate its own distinctiveness as locals were gently leaving the vicinity of the waterfalls. It’s not as might as the likes of Bomod-ok or Tappiya Falls. But staring at the volume of water cascading to the basin and considering the joy and smiles visible on the faces of the people, visiting Gabaldon Falls was already a delightful experience. We left the eco-park around 3 in the afternoon.

How to Get to Gabaldon Falls

Take a bus ride from Manila to Cabanatuan City, fare is around Php175 and travel time is about 3 hours. There are also Baliwag Transit buses that go directly to Gabaldon, Nueva Ecija from Manila. Not sure and have no idea with the schedule though. From Cabanatuan City Public Terminal, you can hop on a jeepney bound to Dingalan, Aurora. Make your way to the eco-park located inside Nueva Ecija University of Science and Technology Gabaldon Campus.