Tiered waterfalls are ubiquitous here in the Philippines. I remember visiting one in Albay, as well as the famous seven waterfalls of Murcia, Negros Occidental. This time, I had it at the City of Majestic Waterfalls, Iligan City. Unlike the others that usually start at the lowest tiered, this time, I started with the highest one, going down.

Almost every barangay in Iligan City has its own waterfall and having just one is too unfortunate. For Barangay Dalipuga and Kalubihon, they have at least 3 waterfalls; Dalipuga, Kalubihon and Pampam, the known ones. After my visit to Dodiongan Falls, I took a jeepney ride to Kalubihon Junction. I saw the signage “To Kalubihon” but I’m not sure if it was really my destination. A woman said that it was Kalubihon Junction and she notified the driver.

Jump-off point to Pampam Falls is at the Kalubihon Elementary School. There are habal-habal available at Php 15 per way, if you’re more than 2. By chance, you can also take the jeepneys bound to the area, not too often though. You can ask the locals in the area to guide you to the falls.

Start of the trek is not that demanding but the latter part was a bit tough. You can see abundant towering coconut trees along the trail to Pampam Falls. A few houses are also located at that distance from the village. Since my guides were kids, I was catching up with them, sign of aging.

Afterwards, we descended a steep slope and then the kids stopped. They told me that we already arrived at the falls. She pointed the direction of Pampam Falls, other falls below and Kalubihon. We checked Pampam Falls first since it is the one located in the upper part.

Pampam Falls, like other waterfalls in Iligan, has also two cascades with its water flowing in a rock formation that resembles a monkey’s head, it was the first idea I thought. The water on its basin is so clear that you won’t be able to describe its depth if you will not try to plunge into it. I didn’t know if the smaller rocks aligned on its basin were arranged by the locals. Just a trivia, the word “pampam” in the local language means “whore, sex worker, or prostitute.”

We then continued to the next falls. It is one of the two unnamed falls as per Lai. The kid told me that they call it Bahi Falls. It is shorter in height compared to Pampam, and water gushing from the falls was contained in a small and shallow basin. 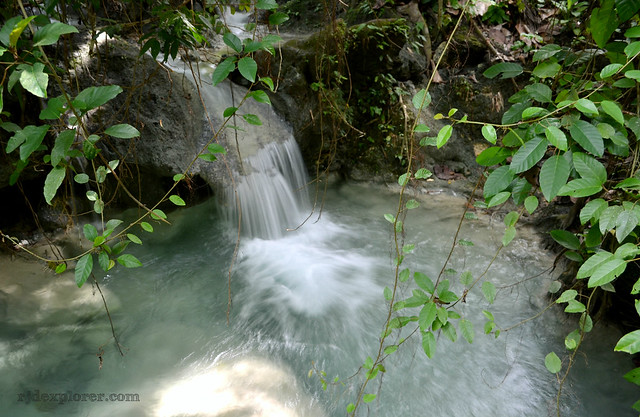 The guide proceeded onto the next falls. She said, “This is Kalubihon Falls.” They led me to the crest of the falls and said that we were going to get down on that part of the falls for us to reach the basin. I followed them but I discouraged myself to continue because I might slip. The other kid suggested taking the other safer route, I also agreed. We descended a steeper slant and after an arduous 5-minute trek, we made it to the basin.

My guide welcomed me to “Kalubihon Falls”. The falls is not that high but the basin is a little bit deep as per the kids. Water is cool and clear but I didn’t attempt to swim. After a couple of minutes, I told them we were leaving for me to get back to the city proper early.

Few days after the trip, I was browsing PinayTravelista’s blog and found out that the last waterfall we’ve checked was not really Kalubihon Falls. It is one of the two unnamed waterfalls near Pampam as what Lai mentioned. Meaning to say, I didn’t make it to Kalubihon Falls which is already near the waterfalls I have seen. Anyways, more reason to come back to the City of Majestic Waterfalls.