“Hanggang dito lang kami,” the jeepney driver told me. I was seated right beside him and when I looked inside the vehicle, only the jeepney conductor was there. I immediately got down the jeep and started walking towards Mandulog Bridge. A police checkpoint was located at the other end of the bridge where I asked for the habal-habal terminal going to Dodiongan Falls. 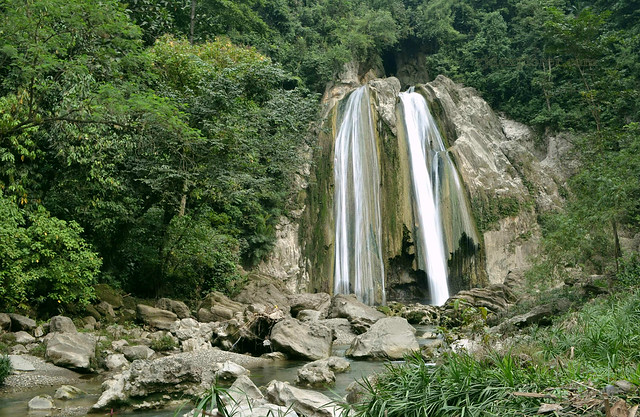 They told me that there are habal-habal on the road ahead. A local approached me right at the moment I arrived at the waiting shed. He was followed by other drivers while asking where I will be going. I said Dodiongan Falls and they called another driver.

He said that the fare to Dodiongan Falls is Php 90 per way but I am aware that it is only Php 45. I told him that a friend in Iligan said that it is only Php 45, yet he was charging me twice the original price. He defended himself by saying that the 45 rate is for more than 2. I asked for a discount and he gave me Php 150 for roundtrip, I accepted the deal.

The road leading to Barangay Dingkila-an, where Dodiongan Falls is situated, is almost paved aside from the way going to the small neighborhood where the trek to the falls starts. Since we had a roundtrip deal, the habal-habal driver volunteered to guide me to the falls. We passed by some houses where locals are busy doing their household chores that early Sunday morning. 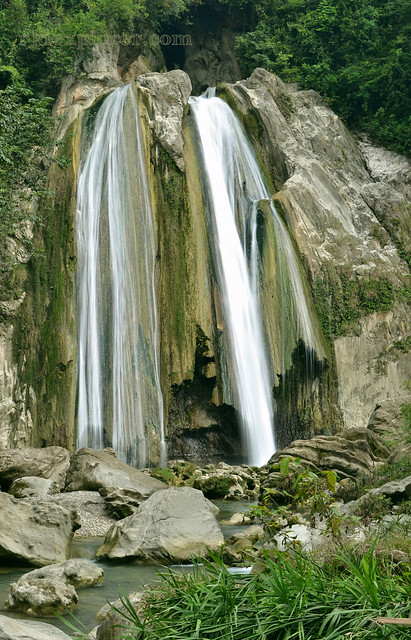 He led the path and crossed the shallow part of the stream. I followed. I was wearing board shorts and trekking sandals that time so getting wet wasn’t an issue. According to him, the trek usually takes 10 minutes at maximum since the trail is not that hard. By this, he asked me if I’m going to swim which I instantly answered by a “No”.

We then crossed another part of the stream where I started hearing the gushing water from Dodiongan Falls. It is where I got to take a first glimpse at the waterfalls tagged as the “Angel-Winged Waterfall of Iligan.” The 65 feet waterfall was tagged as such simply because it looks like unexpanded wings of an angel.

When you see it from a far, without hearing the rush of water, you will doubt if it’s really a waterfall because it seems to be just white lines wizened on the rock. The cascading water goes directly into a 10-feet deep basin which is good for swimming if the amount of water coming from the falls is not that big. I didn’t try swimming though.

After a couple of long exposure without a tripod, and some obligatory selfie shots, I left the area and noticed that the habal-habal driver was already gone. I started walking for me to catch him on the trail. Going back to Iligan City’s main road, I noticed that the highway going to Barangay Dingkila-an also gives a scenic view to everyone.

Where to Eat in Butuan City, Agusan Del Norte