The food in the Friday Pre-Jungle buffet of Kermit Resort, though on a limited number of food options, were good that made me go back to the spread for several rounds. It ended the day and we went back to Patrick’s with the wish of having a great weather ahead because Siargao island hopping was set for our second day on the island.

Waves were still roaring as it crashes on the shore when we decided to call it a night. I was disturbed from sleep by the sound of the rain, 2 in the morning. I expected it to stop by sunrise and went back to sleep.

When I woke up, I was dismayed to find out that it was still raining. The idea of having the island hopping activity on a rainy day was not a good idea, at all. I wanted to see the fine white sands of the islands sparkling under the scorching sun. It didn’t stop so we decided to push through the activity because it was our last day in Siargao.

The driver, who took us from Dapa to General Luna the other day, said that a relative of him offers an island hopping tour at a rate of Php1500; boat can accommodate 4-6 people. We tried to bargain since we were only 2 and told that we will only allotting 4 hours for the tour; he gave us the discounted Php1300 rate.

We left the boulevard around 8 with the drizzles getting harder. Who would’ve dared to do island hopping in a rainy morning? Only us, maybe. Surprisingly, the rain stopped along the way to Naked Island. Little rays from the sun peeked from the clouds when we docked on the shores of the bare island.

The island is called Naked because it has no vegetation. If you’re expecting some nude people doing some sunbathing, you’re naughty wrong. The clear water will entice you to swim, and aside from that, there’s nothing more to do on the island, or maybe shooing the flock of birds that sometimes land on its shore. 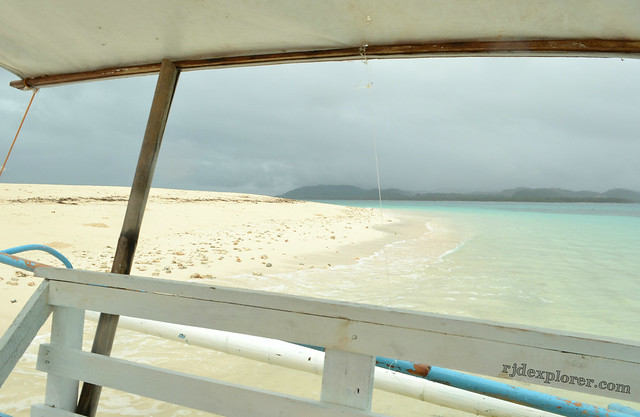 Second stop was Daku, why Daku? Because it is the biggest among the three and ‘daku’ is the local term for ‘huge’. Being viewed from Naked, the right side of the island was dominated by coconut trees while a small community is situated on the left part.

Two kids, brothers I supposed, were throwing their boards on the waves and skimming as the water crashes on the beach. My attention was called when the older one perfectly glided on the waves. I managed to take a photo during his moves. 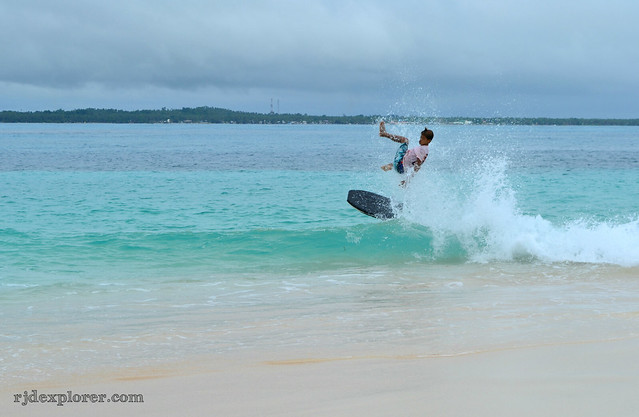 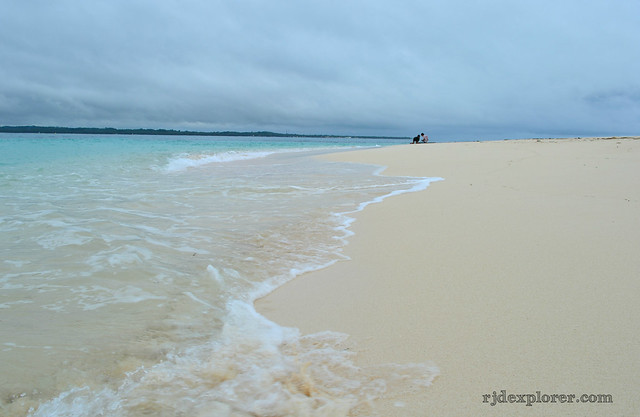 The sand, which is somehow literally white, will charm you to take a walk, and sit, and lay afterwards. There are also cottages available but we declined the offer of the locals, instead, we stayed under one of the coconut trees near the beach facing Guyam Island. It was where a family of dog sniffed our Pandesurf that later on became their feast.

Since we didn’t eat breakfast, the creatures inside our stomachs rumbled that led us in buying a basin of ‘saang’ or known as spider shells which were cooked into adobo with the larger ones grilled. It was my first time to try the shell and it was not that bad. 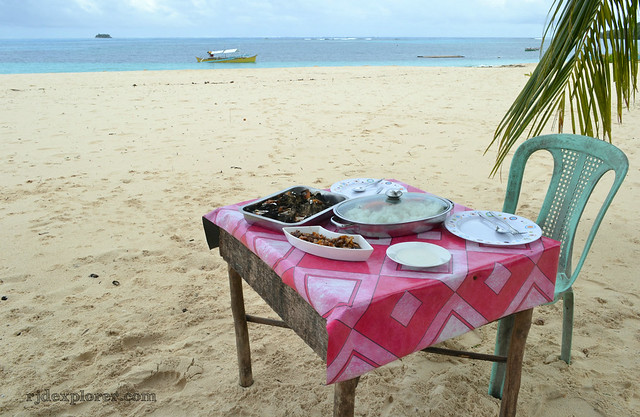 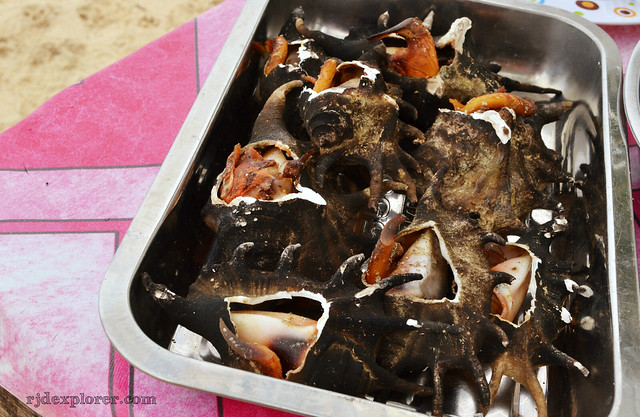 Lunch by the beach! Grilled and adobong Saang on the menu.

After the meal, we sneaked into one of the cottages and stay for about ten minutes before opting to leave the island and proceeded to Guyam. The trip to Guyam Island was one of the craziest boat ride I had so far, crazier than the almost-capsized experience in Guimaras and the 4-hour faluwa ride to Itbayat.

Since our boat was small, I can literally feel the waves pushing us. We can see the enjoyment on the face of the boatman in maneuvering his craft but it didn’t keep us calm. Waves continued to arrive as I was praying for us to dock in Guyam immediately as possible. The feeling was still shaky even when we landed on the powdery sand of the island.

There was a group when we arrived whom we found out later to be the owners (or caretakers) of the island. They are teachers in a secondary school in General Luna and on that day, they were joined by their students. I was able to talk to them and found out that they are taking part in the YES-O program of DepEd. They were in Guyam because they were waiting for the tide to go down for them to visit the area where they culture seaweeds for their project.

We wandered around the small island and decided to settle on the pools created by the reefs, since the water was also clear. I was already swimming when Ate Nats spotted a seasnake that caused me to get out of the water right away. We continued dipping in the waters on the other side.

Past noon when we called the boatmen to leave since number of tourists started to arrive and we were too selfish to share the beauty of the surroundings. Luckily, the boat ride back to Siargao Island was not that wavy and kept me cool all throughout. The activity that morning was ended with a walk under the light rain back to Patrick’s Beach Resort.