The view of the lush forest on my right wanted to secure my attention but the towering residential buildings and commercial skyscrapers from afar battled for a glance. It was a bit weird to walk on a canopy bridge being bordered by two diverse scenes. I felt sorry for the character on my right as the city jungle on the other side threatens its existence. On the other hand, I was gripped on how Singapore gives value and sustains nature spots in their city. On that afternoon, I planned to explore the Southern Ridges. 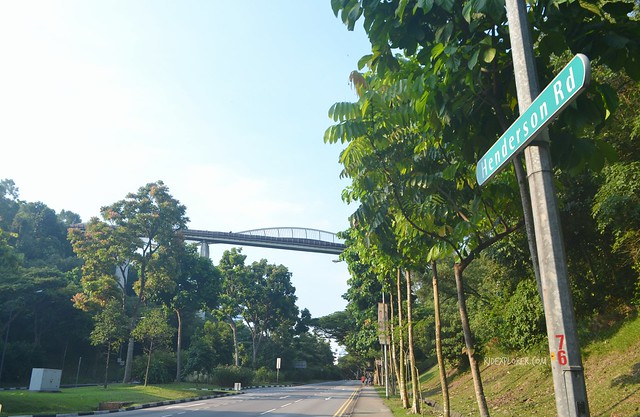 Coming from Chinese Garden, I was clueless about what MRT station to alight. Labrador Park or Telok Balangah? With greater instinct, I opted to go with the second station. I located Henderson Waves on Google map and found that it was still miles from my current location. It was the best time to use the bus transit included on the Singapore Tourist pass I availed.

Trying the bus system for the first time, it was intimidating and funny to break rules of the bus transport system. When the proper bus route arrived, I immediately went inside the vehicle through the rear door. The move caused the driver to yell and advise me to get out and ride the bus using the front door. I immediately went down the bus and still clueless what to do next, I just tapped my card. 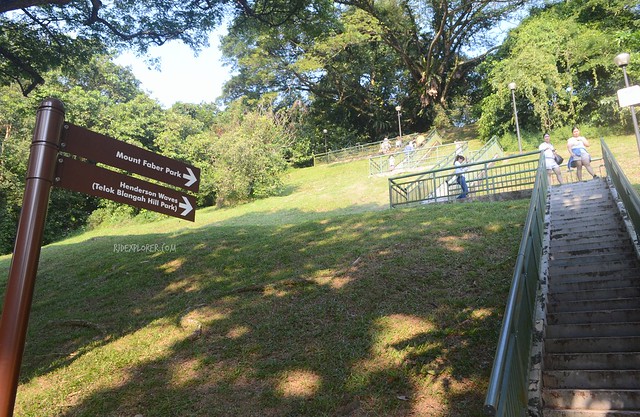 Bus stop nearest to Henderson Waves is Blk 59 along Telok Blangah Heights road. I needed to walk back to Henderson Road to soar the steep metal ladder that would bring me to the highest pedestrian bridge in Singapore. But before I started my afternoon walk in Southern Ridges, I found out that Mount Faber Park is just meters from the famous bridge. There’s a trail for runners but I favored the easiest way via the access road.

Once you reach the peak, a rainbow-colored staircase will bring you to an observation deck that connects the peak to Sentosa Island. While waiting for the right moment for a cable car ride, you can buy some drinks and hang-out on a trendy bar. You can also ring the Bell of Happiness, a century-old bell that served as a nautical instrument. The bell was a gift to Sentosa Island in 1992 and first placed in Sentosa Orchid Park before it was transferred to Mount Faber. 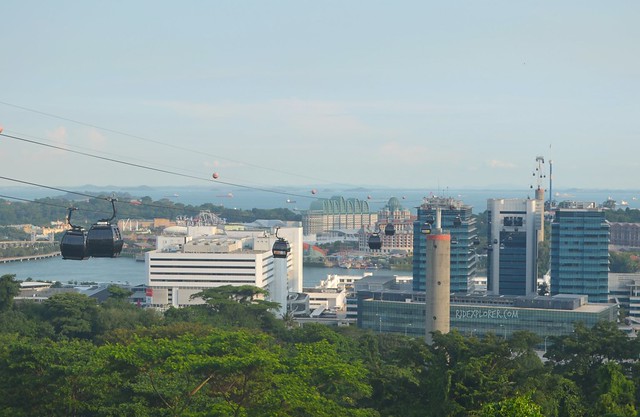 Before the night descended in Singapore, I immediately went back to Henderson Waves to start my walk to the Southern Ridges. The park is a 9-kilometer chain of nature parks and best place to see a panoramic view of Singapore’s concrete jungle. 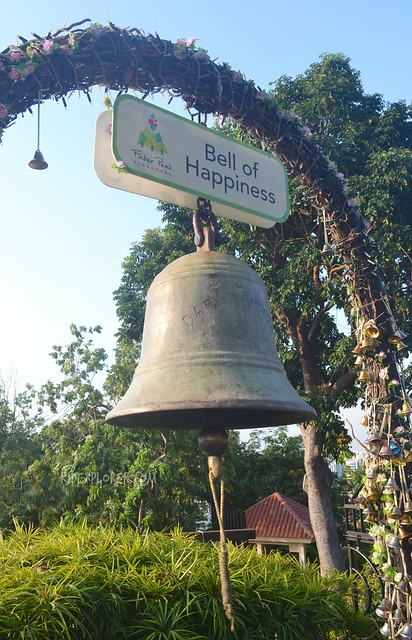 Henderson Waves was built solely to connect Mount Faber Park and Telok Blangah Hill Park. The design of the bridge, according to an information map, was based on a three-fold dimensionally folded surface. Steel and wood are the main materials used in building the bridge. It has seven curved steels with the upper ones forming alcoves that serve as shed for people. It was already past 6 in the afternoon and the sun was still peeking from the horizon. I was scheduled to meet a friend so I hurriedly continued the walk. 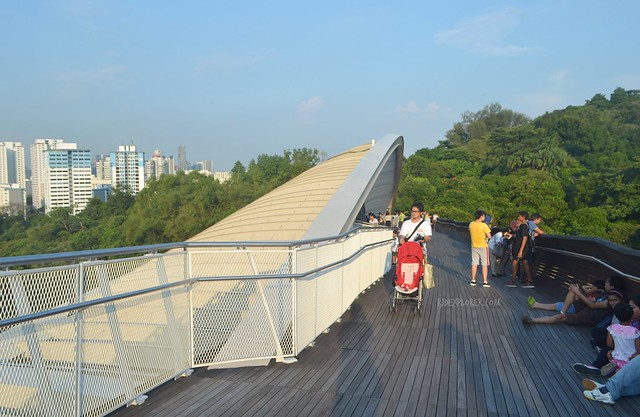 I was forced to visit a vending machine to quench my thirst as my water bottle was already empty. Unfortunately, the machine doesn’t accept bills and I don’t have enough coins to get the cheapest drink available. An Indian couple seated next to the machine became my rescuer with the woman exchanging coins for my bills. 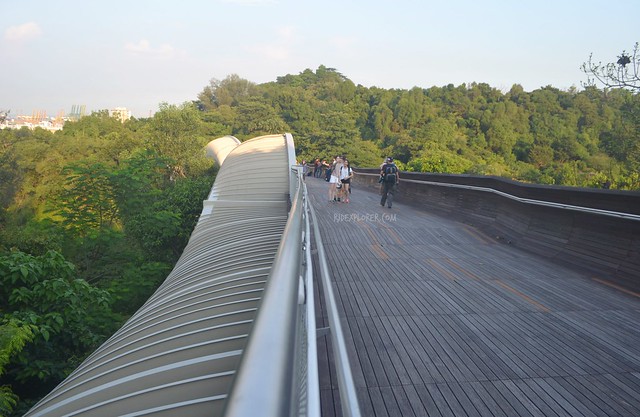 Following the path from to Hilltop Walk, I met people along the way and arrived at a parking area. A sign that I was still on the right track. My tireless feet led me to a courtyard which I found out to be Alkaff Mansion. It’s an Italian restaurant and famous to be the most romantic restaurant in Singapore. The courtyard also serves as venue for weddings and other celebrations. I met several Y junctions and picking directions randomly fortunately brought me to the starting point of the Forest Walk. 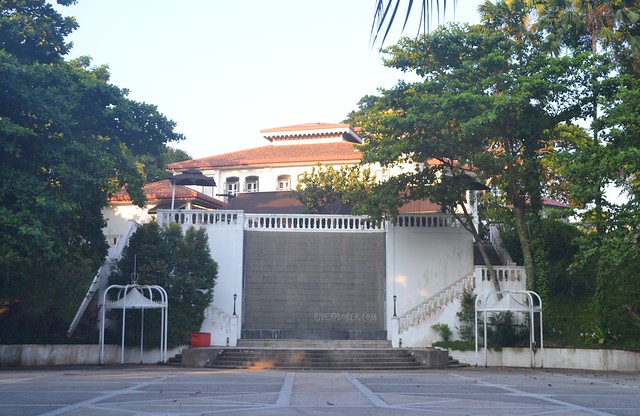 Hesitations got in when I realized that I was still in the middle of the chained trails. A Singaporean prepping for his afternoon run served my source of information. My concern was if there’s a point along the trail to stop where I could avail public transportation back to the city proper. I was anxious because I thought I would need to get back to Henderson Road for buses to Telok Blangah MRT station. And looking at the Southern Ridges map, my knees will surely give up on me. The local informed me that I could alight at the end of Forest Walk. There’s a stair right before Alexandra Arch where I can wait for buses bound to the train station.

Forest Walk covers a total of 1.3 kilometers and will only take you around 20 minutes if your pace is above normal. Most of the people on the steel walkway were locals having their laps and I was the only tourist that afternoon. Few strips of the horizon turned into shimmering gold when I traced the elevated walkway brushing canopy of towering trees. Few parts of the Forest Walk offer a scenic view that will surely stop you for a while. Singapore is humid in general but the inviting fresh atmosphere in Southern Ridges at some point will make you want to stay longer. 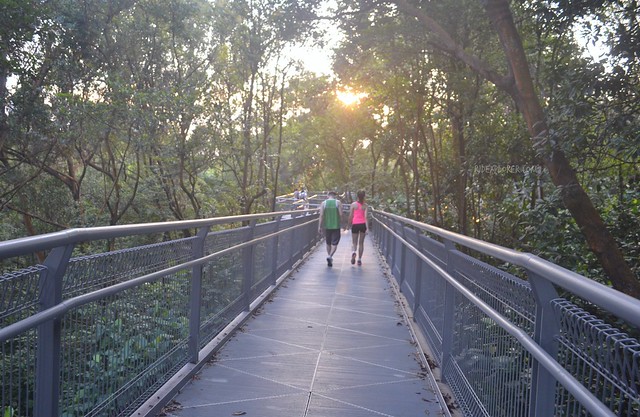 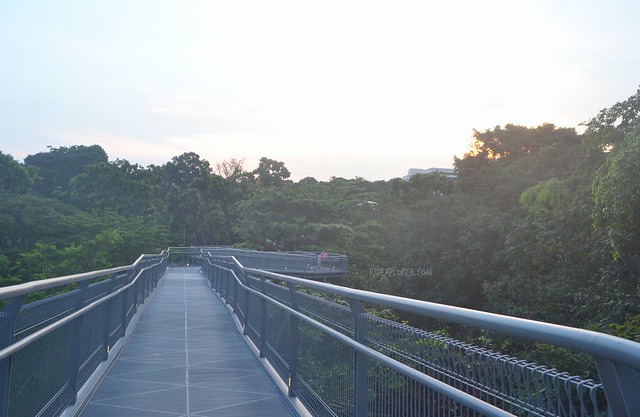 This part of Southern Ridges has an alienated view of the lush forest on the right, and the city on the left. Before I ended the last segment of the walkway, I meet a monkey on the trail. I held all my stuff and walked on the farthest side to avoid the animal. Luckily, it was harmful and behaved properly during our brief encounter. LED lights on the walkway are only available until 12 midnight. 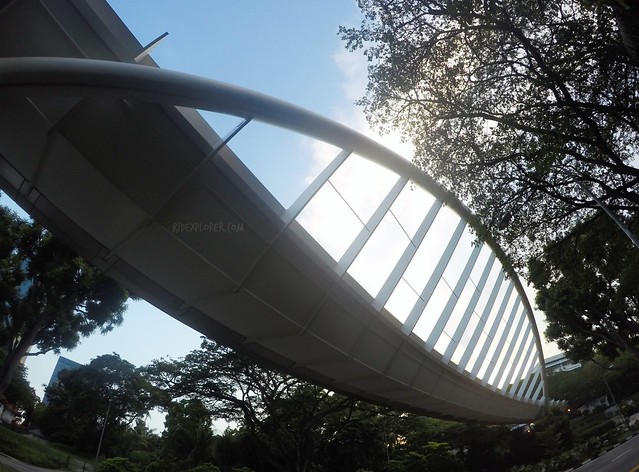 Buzzing sound of cars and buses already signaled me to end the afternoon walk and go back to the city to meet a friend. I took some photos of the Alexandra Arch before I moved down the stairs to the nearest bus station. Segments of the Southern Ridges I wasn’t able to cover are Marang Trail, Floral Walk, HortPark, and Canopy Walk. You can extend the trail up to Kent Ridge Park. 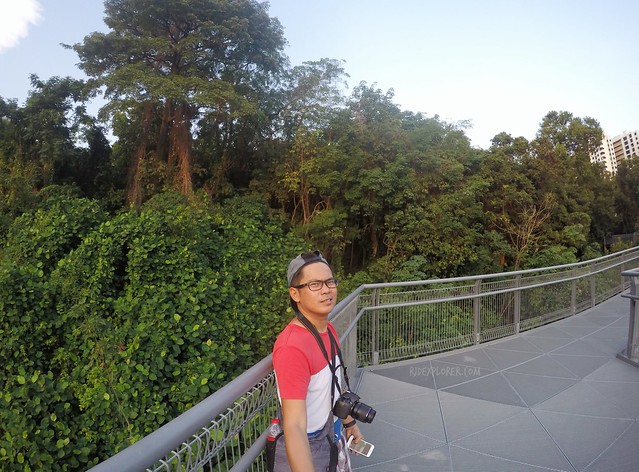 It was only one and a half hour but it seemed that I spent all afternoon wandering and communing with nature that I didn’t expect to exist in a concrete jungle of Singapore. Southern Ridges is unusual on travelers’ itinerary because most enjoy the first-world charm of the country through the must-attractions clustered in the downtown area. But if I have to choose between Southern Ridges and Universal Studios, I’ll surely pick the first.