Friday night. Payday. Heavy traffic. I managed to file a shift-change at work and went out around 6PM. A day prior to the event, I secured a Gabii sa Kabilin 2015 ticket worth PHP150 at the Ramon Aboitiz Foundation Inc. office that gave me access to all the participating museums and heritage sites, as well as shuttle rides for the entire duration of the event.

Gabii sa Kabilin started in 2007 as an adaptation of Germany’s Lange Nacht der Museen or Long Night of the Museums to highlight Cebu’s cultural, historical, and religious heritage. It is usually held every last Friday of May, from 6PM to 12MN, to commemorate the Philippines’ National Heritage month.

Along with the ticket was the Gabii guide that states the different routes of the event as well as the list of participating sites that were grouped into 6 clusters: educational institutions, arts and culture, public buildings and spaces, religious organizations, port and commercial establishments, and culinary.

First site I visited was the University of the Philippines Cebu in Lahug that was inaugurated in 1929. Different paintings are displayed in the hallways of their neoclassical main building that was divided into two wings by an entry hall. Aside from the building, paintings, and the oblation, numerous traditional games such as patintero and piko, were demonstrated by the students to revive the Filipino games during the event.

A shuttle bus was supposed to transfer participants on that route but volunteers in UP Cebu informed us that the buses were delayed and expected to arrive in an hour. To cover more sites within the limited time, I decided to commute from Lahug to Parian and did a walking tour to Fort San Pedro, which served as the hub for the free shuttle buses.

Yap – San Diego Ancestral, one of the oldest houses in the Philippines, also prepared some cultural presentations for their visitors. Beside the Heritage of Cebu Monument, a sculpted tableau featuring some significant and symbolic events in the local history was a stage that served as a venue for the volunteers to perform some folk songs and dances. I continued the evening historical walking tour along Mabini St and stopped by University of Southern Philippines Foundation to check out the Rizaliana Museum housing the largest collection of Jose Rizal memorabilia outside of Luzon. The museum has pieces of the hero’s wardrobe, sketches, and postcards.

Next destination was the Archdiocesan Museum of Cebu that looks very promising during the night than daytime. Meanwhile, the white facade of Cebu Metropolitan Cathedral stood out from the darkness of the evening. I continued my way and ended up in the disorganized, due to scrambling participants, Fort San Pedro. I went back to my Gabii guide and planned on how to visit all the destinations listed. After minutes of deciphering the right formula, I boarded a shuttle bus bound for Mandaue City but found myself dropping by Museo Sugbo.

Museo Sugbo is formerly the Cebu Provincial Jail with the structure mostly built from coral stone blocks from the demolished Parian Church. It is considered as the largest museum in the province and I wasn’t able to visit all its 14 galleries. Some interesting finds inside the museum are artifacts discovered from different parts of Cebu such as Barili and Bantayan. On one of the galleries on the second floor are some artillery, war memorabilia, and some guerilla money. 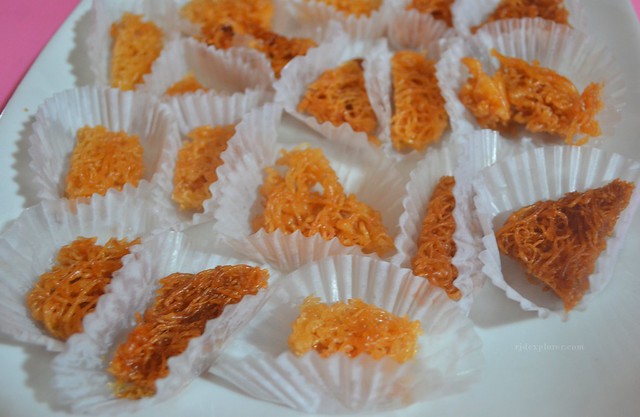 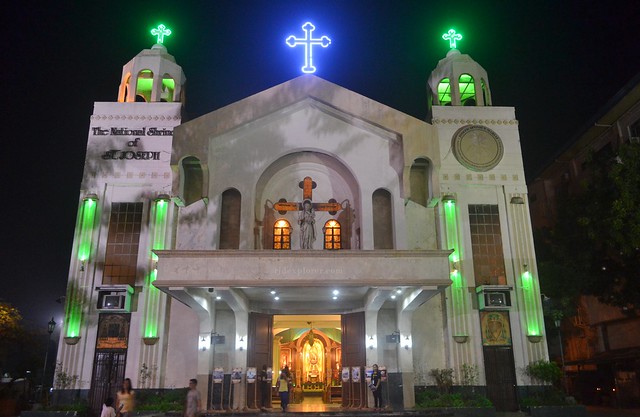 Tagaktak and the facade of the National Shrine of Saint Joseph.

Continuing with the route brought me to Mandaue City where cultural shows welcomed all participants of Gabii sa Kabilin 2015. After a mini-Sinulog streetdance performance, I dropped by the century old National Shrine of Saint Joseph. A culinary demonstration was also held in-front of the city hall where people of Mandaue showed how some of their delicacies are made. One of them is “tagaktak,” a crispy, thin, triangular net-like of rice batter with coconut milk, egg, and sugar.

The route went back to Fort San Pedro and I needed to transfer to another shuttle bus to change my route and to cover other sites. The bus was going to Fo Guang Shan Chu Un Temple but made a short stop in San Nicolas De Tolentino Parish, one of the oldest in the Philippines, years ahead of the establishment of the Cebu Diocese in 1595. We continued the route to Fo Guang Shan Chu Un Temple where an excerpt from the Siddhartha Musical was shown.

It was almost midnight and I decided to get down the shuttle near University of Visayas in Colon. I noticed that a lot of people were going inside a building and curiosity made me realized that it was Jose R. Gullas Halad Museum. The museum pays homage to the musical heritage of Cebu featuring works of musical legends of the 20th century like Ben Zubiri, Vicente Rubi, Domingo Lopez, and Pilita Corrales. Artifacts inside the museum are mostly instruments, records, personal items, and other works that celebrate the imaginative Visayan folk life and language.

My participation in the Gabii sa Kabilin 2015 was ended by a snapshot of the façade of the building of The Freeman, the first newspaper in Cebu founded by Paulino Arandia Gullas, and first saw print on May 10, 1919.

It was indeed a tiring six hours of hopping from one bus to another to actually see some memorabilia inside museums, heritage and historical landmarks in Cebu. Six hours that literally drained my energy yet provided knowledge on the colorful past of Cebu and on its big role in some significant moments in the history of our country. There were a total of 37 spots in the event guide but I was only able to visit 15 of them, too many places yet too little time.