To complete my itinerary on that trip to Eastern Visayas, I consulted Google for interesting sites in the area. With a few search and help from the friendly staff of Ironwood Hotel, I made my impromptu historical tour. Right at one corner of Burgos and Juan Luna Streets, I started my mission to discover things to see in Tacloban City. 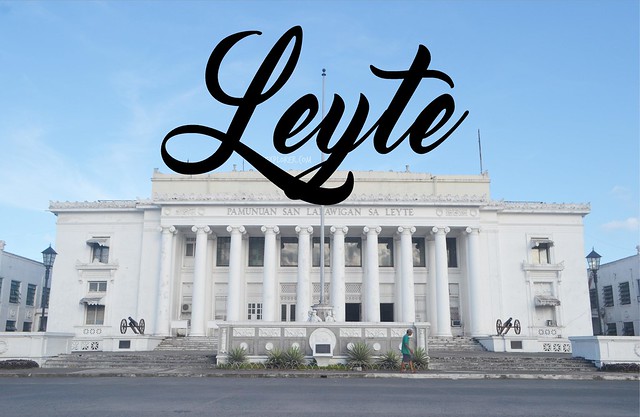 Since the activity was spontaneous, I listed down everything and tried to visit as many destinations as possible. Aside from San Juanico Bridge and McArthur Landing Site, there are still numerous destinations in Tacloban City and nearby towns.

THINGS TO SEE IN TACLOBAN CITY

The shrine was one of the several presidential rest-houses built by the late President Marcos during his term. This is a sought-after spot in the city because it entails the profligacy of the first family during their times. I didn’t get the chance to see the interiors of the shrine/museum. A fee of Php200 is required, for first 3 people, and it was steep for me because I was alone. 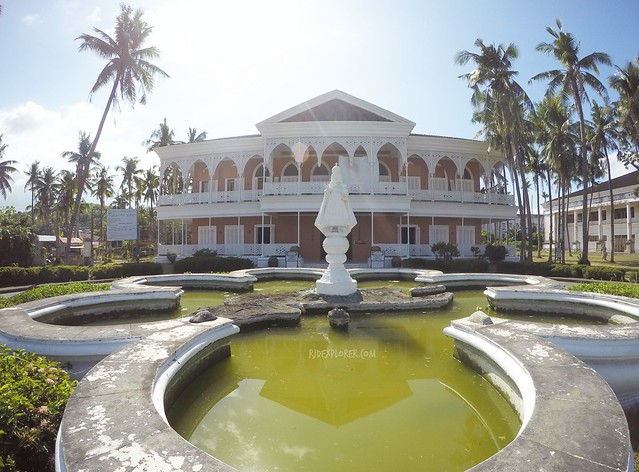 The structure, from the outside, is quite simple and not that imposing. A seven-petaled flower fountain, with a Santo Niño figure in the middle, is located few meters away from the mansion. Soaring coconut trees surround the house while grasses in the front yard was already a foot high.

Don’t be confused by the two sites, the church is different from the shrine mentioned above. Santo Niño Church houses the miraculous image of Santo Niño, the patron saint of Tacloban City. The church was one of the structures severely damaged during the onslaught of Typhoon Haiyan in 2013. 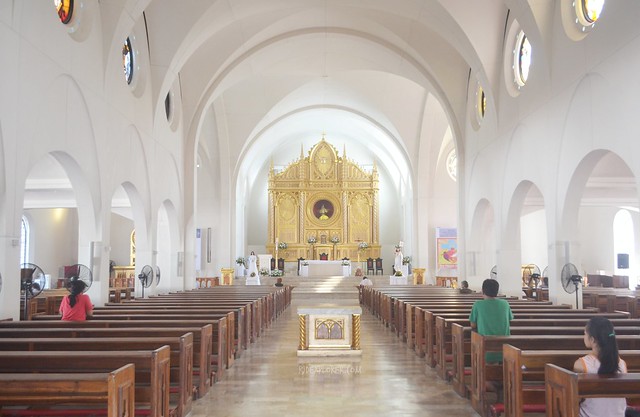 The new church utilized an all-white wall from outside to its interiors. The five-story belfry, almost visible anywhere in downtown, makes it a landmark when you’re lost in the streets of the city. The golden retablo, enclosing the image, stands out from the pallid colors inside the church.

My walk continued and passing by Tacloban City Hall is a park where a sculpture sticks out from shrubs of ornamental plants. The monument is called Madonna Maria Kannon, a memorial that symbolizes peace between Filipinos and Japanese. It was also constructed to commemorate the brave soldiers who fought and died on the exact site during the World War II. 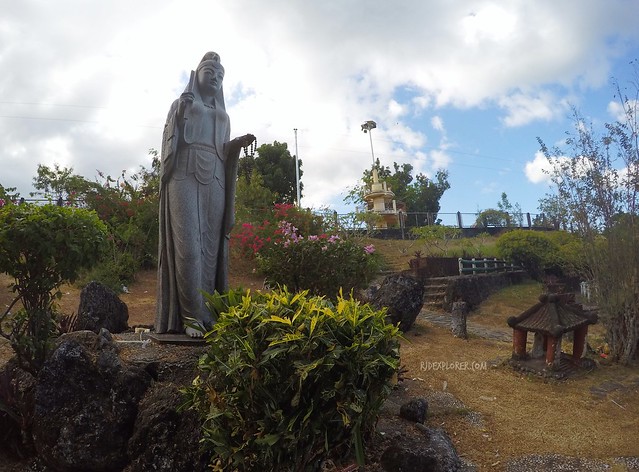 Walking from Madonna of Japan to Leyte Park Resort, I had a hard time looking for the impressive provincial capitol building. I immediately used my phone to track its location. Moving towards Tacloban City Port, the structure came into my view. The edifice served as the seat of the Commonwealth government of the Philippines during the term of President Sergio Osmeña. The site is also the precise place where Osmeña was formally declared as president by General McArthur. 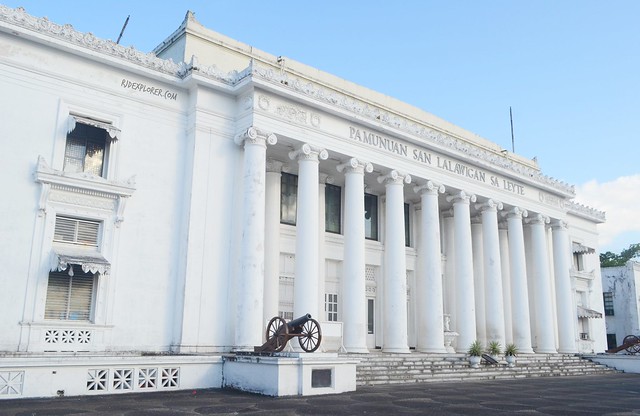 The neo-classical capitol building has 10 columns that support the main block where the “Pamunuan San Lalawigan Sa Leyte” was etched. The straightforward, flat, and all-white facade highlights the clean lines of the structure that separates it from the vivid horizon on its background. Apart from the striking architecture, there are two murals depicting the McArthur landing and First Mass in the Philippines that can be viewed during your visit.

Typhoon Haiyan devastated Tacloban City and nearby municipalities in 2013. This was a tragic moment for the country and even the world. Thousands of lives were taken and millions of people were displaced after the calamity. 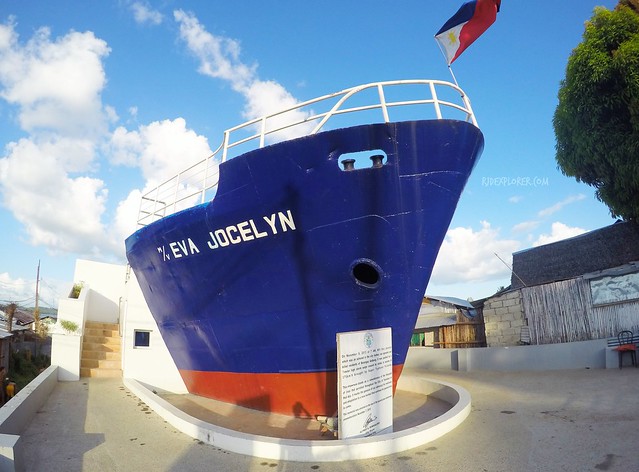 During the typhoon, on the morning of November 8, 2013, M/V Eva Jocelyn, which was anchored in the city harbor, ran aground and killed residents in Barangay Anibong. The ship was pushed by the harsh storm surge caused by the typhoon. The shipwreck was built to remember the lives that perished throughout Tacloban City on that day.

THINGS TO SEE IN PALO, LEYTE

“I shall return,” a famous line in Philippine history associated with General Douglas McArthur. The celebrated event happened in Palo, Leyte on October 20, 1944, where the general fulfilled his promise of returning to the Philippines. He was recalled to duty during World War II to be the commander of the US Army and with the purpose of uniting the Philippines and the United States under one command. 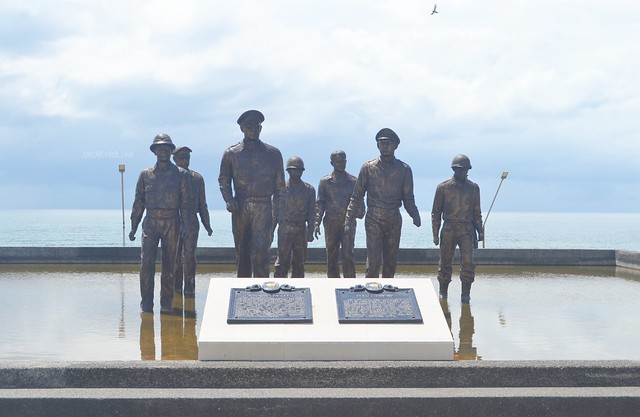 In the same spot where McArthur and his men landed, is now the McArthur Landing Memorial National Park in Palo, Leyte. The main attraction of the park is the seven double-life-sized bronze statues on a manmade pool depicting McArthur’s entourage being led by the general. Not known to many, the park is within Red Beach, a color-code used by the US Army for easier communication within the force during the war. 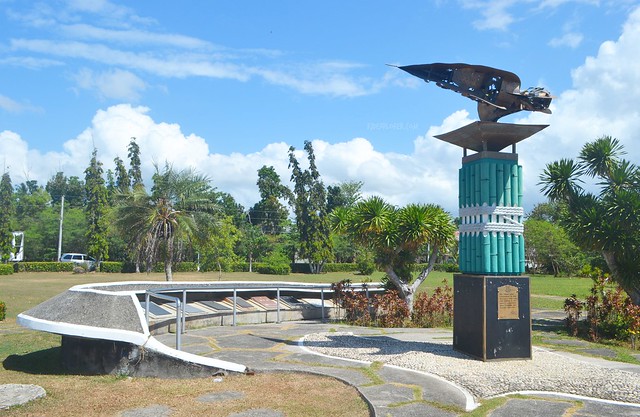 Few meters from the statues is a rock garden park having tablets from different countries who worked together in preserving peace 50 years after the war. The commemoration plate states that “It is dedicated to peoples of all nations who share and cherish the same ideas of freedom and democracy.” The garden was inaugurated on October 20, 1994, five decades after World War II.

The cathedral, built in 1596, was transferred from Jesuits to Augustinians (1768) and to Franciscans in 1843. It was proclaimed as a cathedral on March 25, 1938, with Manuel Mascariñas as the first bishop. The grand altar of the church contains eight images. 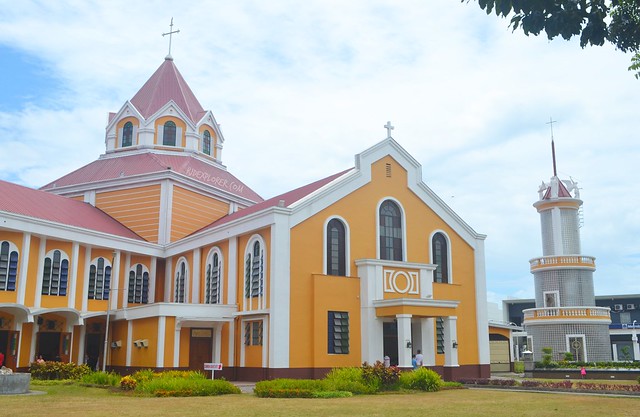 It was damaged during the Typhoon Haiyan but renovated prior to Pope Francis’ visit last January 2015. At the side of the church is a mass grave were hundreds of bodies were buried. It was heartbreaking to see the base of a tree, near the site, still covered with wooden crosses from the families of those who perished during the typhoon. 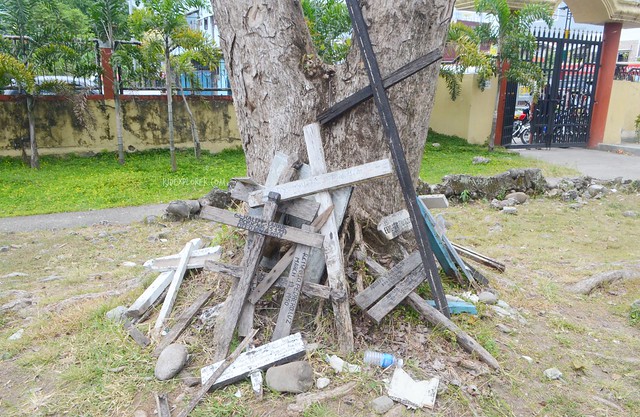 This unplanned part of my itinerary allowed me to spend some moments on historical sites of the city and the nearby municipality of Palo. It was just ironic that some places I’ve visited are landmarks for extravagance, friendship, and celebration, while others were dedicated to remember those who perished and suffered during the terrible hit of Typhoon Yolanda.

Where to Eat in Cebu: SM Seaside City Cebu