Tinago Falls of Iligan City was already featured on this website. The waterfall that I consider the most beautiful that I have seen so far. Just so you know, there is another waterfall named as Tinago Falls which can be found in Biliran, a province in Eastern Visayas. 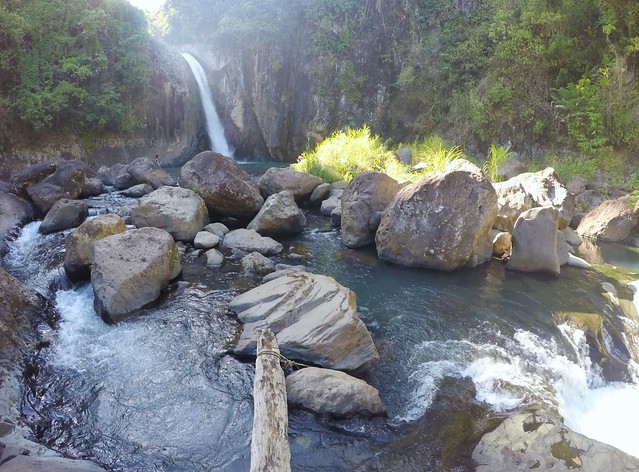 Right after we got back to mainland Biliran from Sambawan Island, habal-habal drivers were already intimidating in asking where we’ll be heading next. We inquired on how to visit waterfalls in the province and the answer were rates and list of destinations included. It was past noon and considering a half-day to chase waterfalls, the offer didn’t fit our taste. 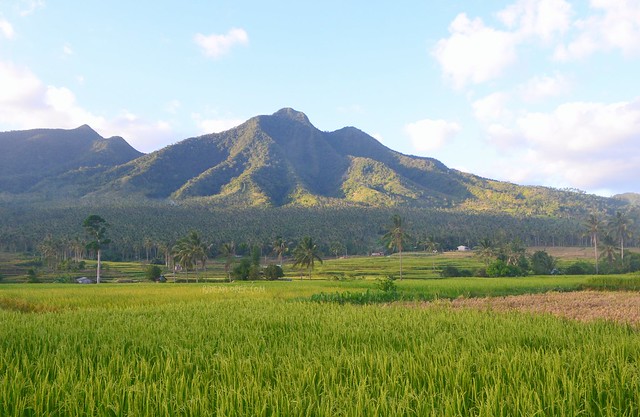 On our way, we were still computing the cost and if we really got a nice deal. In the first place, we could just fit in two habal-habals and not three. When we checked-in at TJ Pension House, a nice and affordable place to stay in Naval, the front-desk officer told us that roundtrip rates to Tinago Falls is only Php600 per habal-habal. This led us to finally realize that those guys were a scam. We decided to just politely decline their offer of Tinago Falls tour and just availed services from our accommodation.

After finally taking a more decent bath with unlimited fresh water and a late lunch at a nearby cafeteria, we started the ride to Tinago Falls. The road, trailing some mountainous part and rice fields, already satisfied our eyes. But that wasn’t our main goal that afternoon. 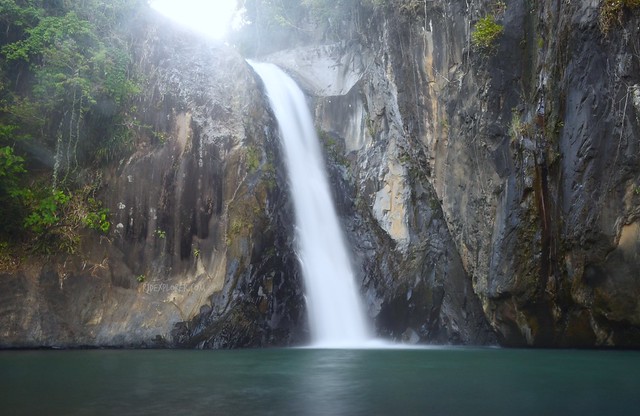 A left turn from the main road brought us to the entrance of Caibiran Rainforest Park that includes the waterfall. Descending the staircase welcomes you to the registration where you need to pay Php15 per head. At that point, I can already hear the cascading waters being dispersed by the waterfall.

Passing by a cottage, more of a covered area with bleachers will give you the exposed simplicity of Tinago Falls. I’m not sure how high the water could go but we were lucky that day to get near the catch basin. “Tinago” literally means hidden but the grandeur of the waterfall is very open to everyone. It was around 4 in the afternoon yet groups of tourist still arrive to check out the must-see falls of Biliran. 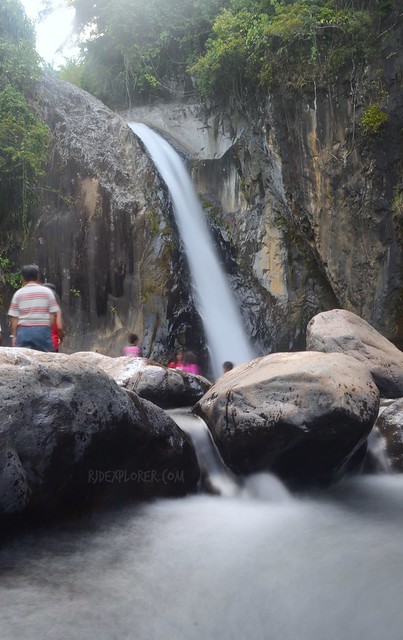 The flowing stream from the waterfall’s basin continues to another natural pool where visitors can take a plunge. We didn’t spend that much in the area as we saw a nebula of dark clouds preparing to shower the province. 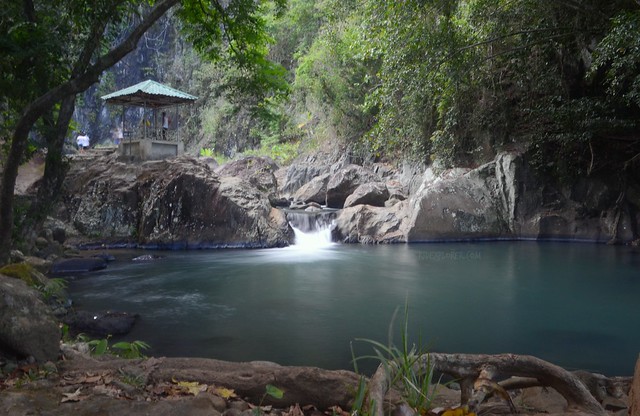 We trailed back the zigzag roads going to Naval. In a spot, where the motorcycles need to accelerate, one broke down. The driver swayed his head from left to right while clucking. Not a good sign. One of the drivers insisted that we should utilize his bike. We tried, for a short time yet very decisive if it was a great idea. 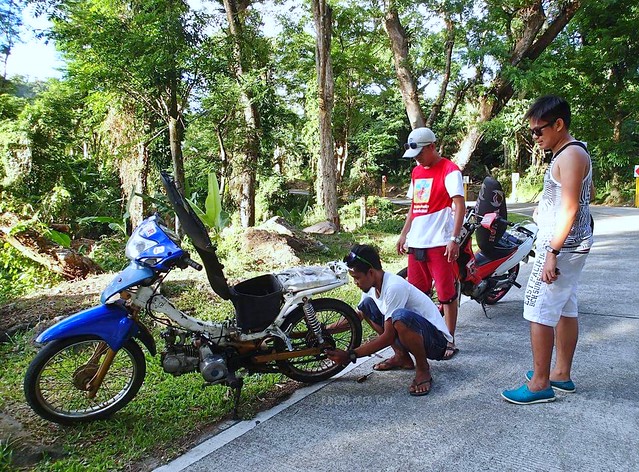 While waiting for the guys to fix their bikes, we left them and walked along the road canopied by tall trees. The sun slowly radiates the place and provides a dramatic element on the scene. We were enjoying the moment when a tricycle passed us and asked what happened to our service. The driver then advised us to just wait for them because the area is not safe. They left and we were clueless with his instruction. We thought he was pertaining to the sharp-curved roads. A local, who was also walking right next to us, told us it was about the people’s army dwelling on that part of the mountain. He then reassured that the area is safe. 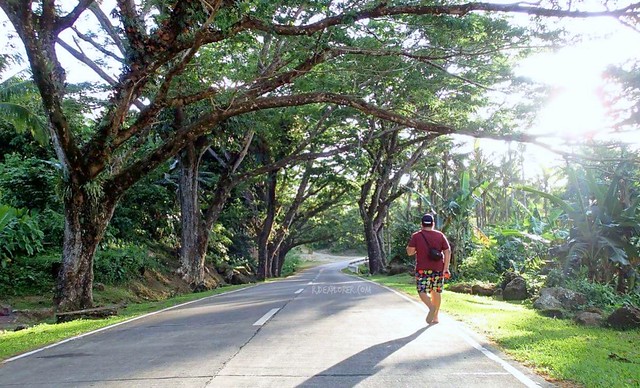 The other bike gave up and we continued riding a single motorcycle. We felt that it was karma by dumping the drivers from Kawayan Port. We invariably stop and reassemble our situation on the bike. When we passed by the mountainous area, rice paddies decorated with some coconut trees and being harmonized by the mountain, caught our attention. 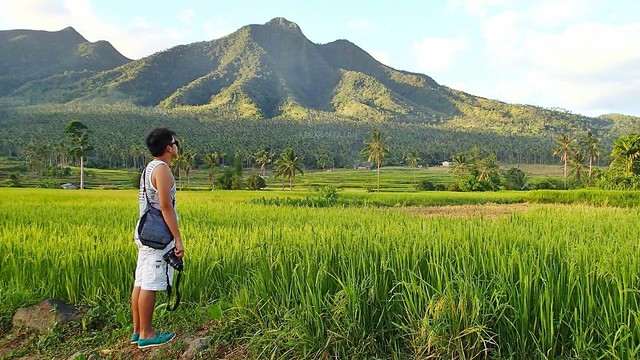 When we reached the part where local transportation is readily available, the other guys transferred. We safely arrived back in Naval and feasted on some street food near our accommodation. It was a short visit to Tinago Falls and the mishap we had turned out to be positive on our side because we were delighted by the scenic views along the way.

HOW TO GET TO TINAGO FALLS, BILIRAN

Tinago Falls is located in the town of Caibiran, Biliran. You can reach the waterfall by chartering motorcycles (known as habal-habal) for Php600 round trip. Travel time is about 30-45 minutes.

Where to Eat in Cebu: SM Seaside City Cebu