“Igganam dayta bag mo ta baka matnag.” A language I rarely hear in the Visayas which is dominated by the Cebuano language. I looked at the direction of the other group and eavesdropped with their conversation. Yes, they’re Ilocanos, like me. While our boat sashayed from the port to Kalanggaman Island, I asked where they’re from, “Pangasinan,” exclaimed by one of the ladies. 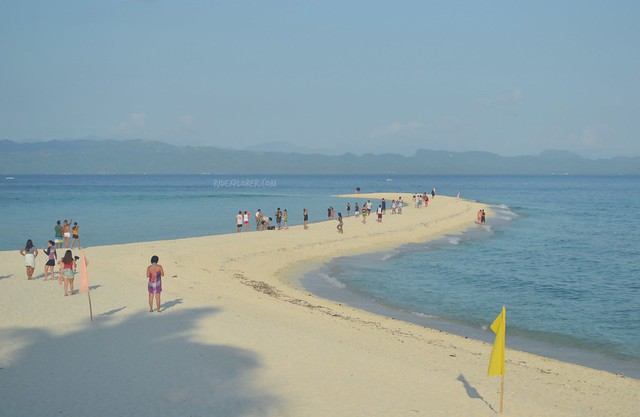 Thirty minutes before that, Palompon Tourism Office was more chaotic than the nearby market. Systems were not being followed by the tourism staff and boatmen doing their separate works in merging travelers into bigger groups. We were still dizzy from the Naval van ride to Libongao then to Palompon and the scene didn’t ease our feeling.

I volunteered to buy food supply for another camping experience in Kalanggaman Island. Navigating the alleys in the market led me to buy roasted chicken, grilled pork belly, rice, pineapple, and mineral water. Bread and coffee weren’t enough for breakfast so I ordered a plateful of stir-fried noodles when I got back at the tourism office. 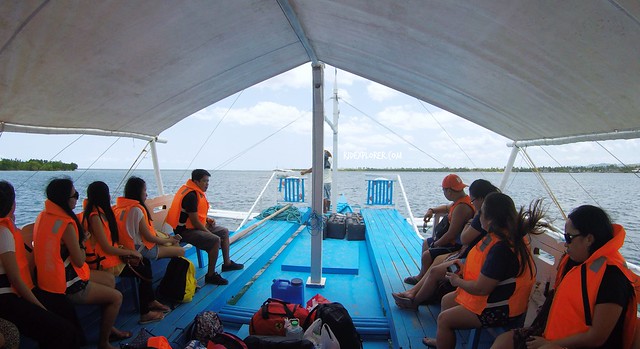 When the disorganized process was settled, and more boats arrived from the island, groups were allowed to board the boats. While the crew prepared to leave, a tourism officer hopped on the vessel and did an orientation. He also discussed places to and not to swim, as well as areas to pitch tents. Kalanggaman Island has parts where strong currents and rip tides are present so please abide by the rules and regulations being imposed for your own safety. 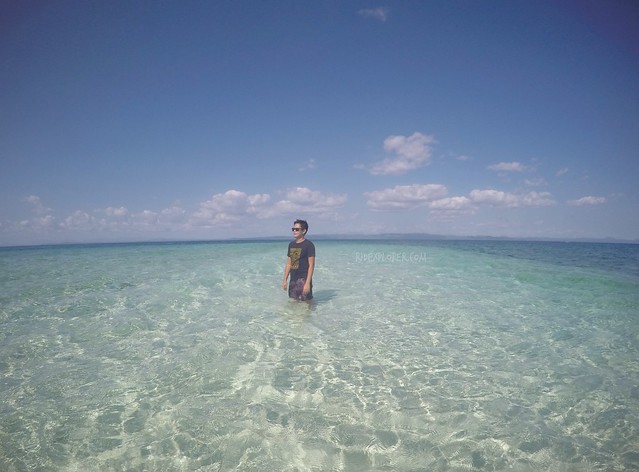 Someone from the group asked why it was named as “Kalanggaman”. With these folks coming from Luzon, “langgam” means ant, but in the Visayas, it’s “bird”. He immediately answered that apart from the different species of birds that can be found on the island, it also looks like a bird with the two outstretched sandbars at both ends resembling a bird’s wings. He then hopped off and bid “Enjoy!” to the excited travelers.

Few meters from the sandbar of the famous Kalanggaman Island, we can already judge how crowded the island on that weekend. We anticipated that scene because it was summer and a weekend. It’s the lethal combination that brings hordes of tourists at any place in the country.

Eager to take the obligatory photo on the long stretch of sandbar, we constrained ourselves first to have lunch. A blanket served as our picnic mat where we dumped all our food while our bags bathing under the scorching sun. Tables, chairs, and even beach chairs were scattered around. There were no fees collected so we assumed it was already covered by the tourism fee. It goes on a first-come-first-serve basis though so exercise your grabbing skills. 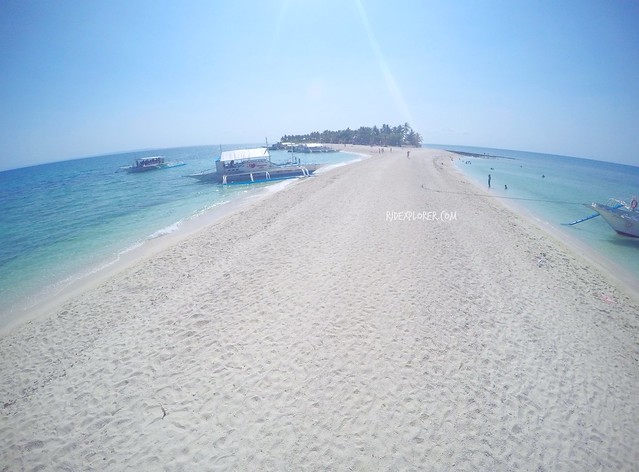 Right after we satisfied our tummies with the food we bought, we joined the crowd loitering on the sandbar. The struggle was real when it comes to taking a picture without photo bombers on the frame. And other people weren’t so considerate that they stay in the same spot forever. The water at the far end of the sandbar was just about knee-deep but be careful with the rip curls. The clear waters remind me of Calaguas.

Monopods were everywhere. Tourists were throwing their action cameras in the air, including us, to get a better image of the trailing sandbar. After taking a lot of photos, we immediately took a plunge because we will be losers if we won’t swim in the pellucid waters.

Taking naps while relishing the fresh and cool breeze is one of the things I usually do every time I join beach camping. It is one of the things you can’t do in the city so better enjoy it if given the chance. There were designated areas for tent pitching as per the tourism office yet there were no signs to be found. When we unearthed the perfect spot to settle, we assembled our tent. We then proceed to the other side of the island to wait for sunset. 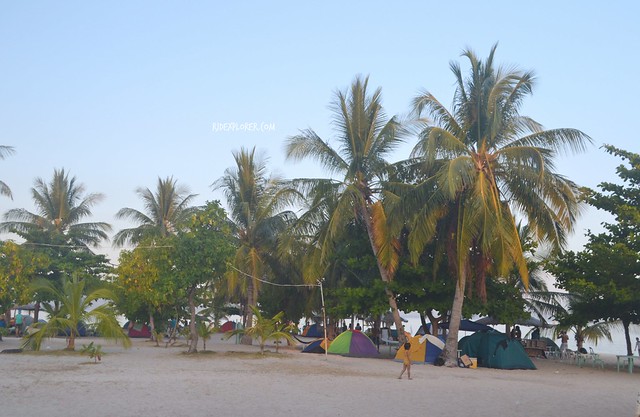 Going to the west point, we trailed the rocky shoreline where, at that time, fishermen return from a day’s catch. Boats lined up on the rock-strewn coast with them cleaning the fishes they’ve caught. The sun just disappeared from the horizon when we reached the endpoint. Dusk was about to swathed Kalanggaman Island and we needed to go back to the base camp.

Day-trippers were already gone. We prepared our dinner and we were lucky to select a campsite near a light post. A family, adjacent to our place, even brought their solar-powered light source. The calmness of the sea together with the stillness of the evening joined us on our dinner.

Taking a shower was really a challenge. Boatmen provides one bucket of freshwater for every two guests. Imagine 6 gallons of water being shared by two persons. Shower rooms create long queues in the evening and the easiest way to have a shower was under the shining moon in some hidden parts of the island. 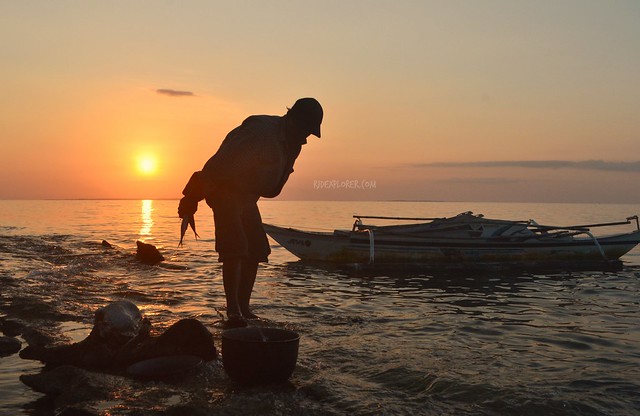 Bottles and cans of beer and leftover dinner accompanied us while we share stories during the evening. As usual, we managed to find time for Milky Way photography before calling it a day. Wind was less insidious compared to our experience in Sambawan Island.

The majestic sun woke us up the following day. There were no cock-a-doodle-doing chickens but the crashing waves were relaxing alarm for our ears. We savored the hours left before we head back to the tourism office of mainland Palompon. 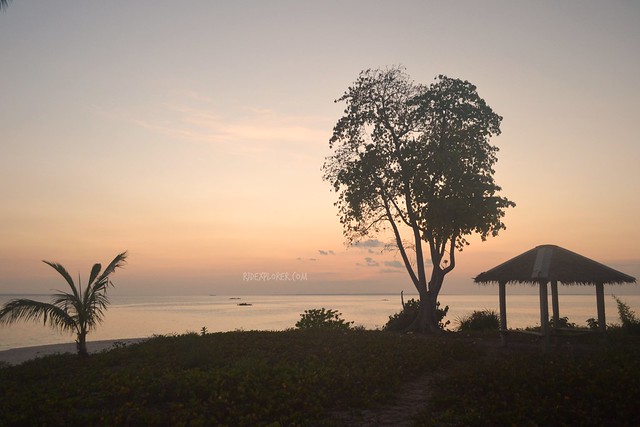 What I admired about the tourism’s way of protecting Kalanggaman Island is the system they employ on garbage collection. Before heading to the island, every group was given two plastic bags: one for biodegradable and one for the other. And when we left the island, the boatmen also brought these bags of garbage back to the mainland.

The Kalanggaman Island beach camping experience ended our tour in Leyte and Biliran. I was glad when a staff from the tourism office informed us about a ferry from Palompon that directly goes to Cebu. There’s no more need to go to Ormoc City to catch a ferry back to the Queen City of the South. 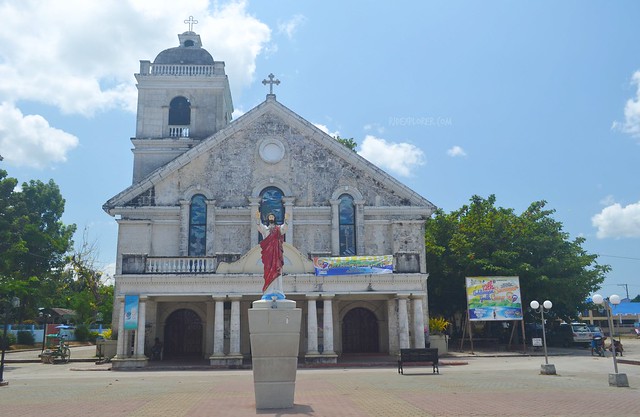