Quirky interiors, picturesque facades, and colorful fixtures are the major things, except for good food, to consider when opening a restaurant. Few years ago, Yolanda hit Eastern Visayas and the rebuilding process inspired local restaurateurs to hype up a bit their cafes and food places. Every time I search for places to eat in the city, I always stumble on these cute Tacloban restaurants being promoted by Instagram users. 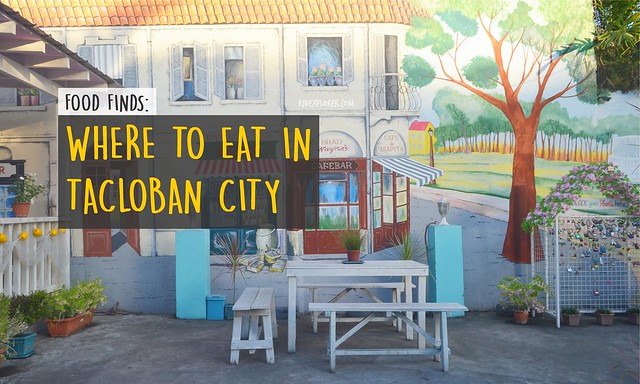 On my goal to list down great places to eat in Tacloban, for the nth time, I utilized the social media using hashtags that I know will return results to help me finalize an “eat-tinerary”. I was able to shortlist must-try restaurants with the help of social media that alert travelers where to get amazing food. Most of the places I’ve tried are located near or in Burgos Street so better select an accommodation near the area.

Ocho Seafood and Grill is known for their tagline “We cook your food the way you want it”. It’s more of a “dampa” like those in Manila, Pala-pala in Bacolod, and D’Talipapa of Boracay. The catch here is the restaurant itself offers the wide variety of fresh seafood, aside from doing the cooking. Cooking fee is free as long as you meet the minimum 100 grams per food type. The spread is not limited to seafood because I also saw some slabs of pork, beef, and chicken. 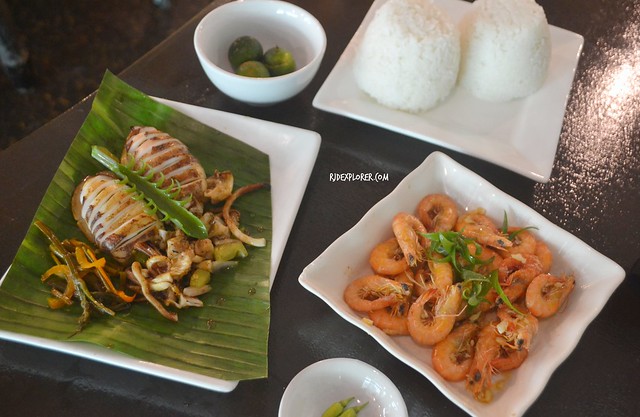 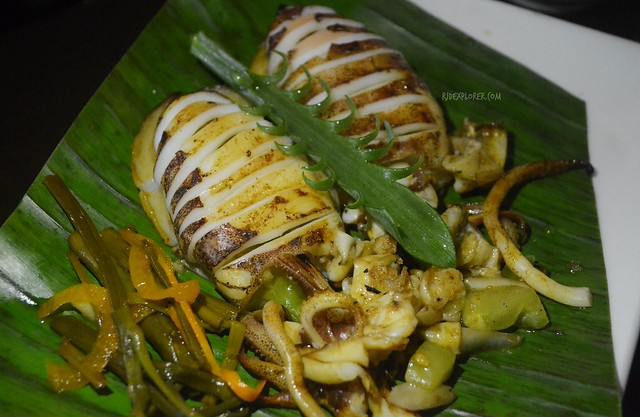 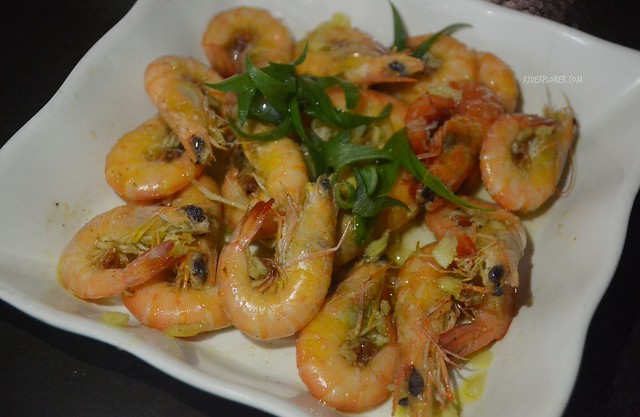 I chose my desired seafood: 2 small sizes of squid, and some shrimps. I asked them to grill the squid and the shrimp sautéed in garlic and butter. I spent Php235 for that, including two servings of rice. With the number of customers visiting the restaurant, the chef already perfected the way squid should be grilled, soft and not tough. The shrimp size I had was second to the smallest and I perceived that I will have a hard time peeling its shell, turned out that I was able to de-shell the shrimps easily, with just the spoon and fork. (Trece Martirez St., Tacloban City)

From a tiring walk around the city to visit some landmarks, I passed by this vivid compound which is really an eye-candy. Pastel colored facade and a wall converted into a mural, CHEW-lly LOVE-able. This is the restaurant that currently creates buzz on social media as the hippest food place in the city. 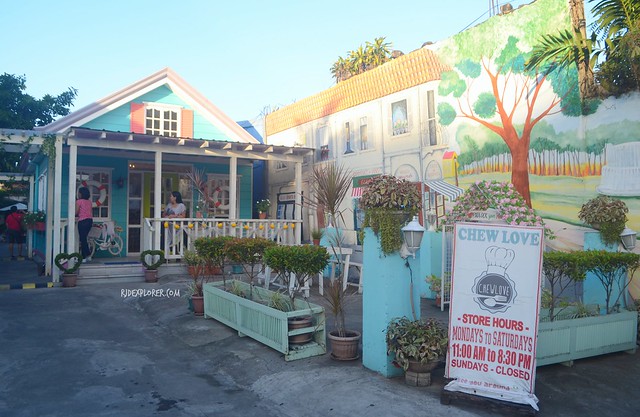 The glowing colors continued in the interior of the two dining areas: wall arts, lighting fixtures, as well as table mats. Let’s start digging the menu. Entrées are divided into four pipes: fish, beef, pork, and chicken; each having 2 to 4 options. You will find yourself falling in love and be excited with dishes like Fish Be with You, Steak to One, Love at Pork Sight, and Pork-Ever Love. An arrow through the heart emoji indicates that the meal is a certified “Crush ng Bayan”, bestseller I believed. There’s also pasta, sandwiches, burgers, soup, sides, and beer match. 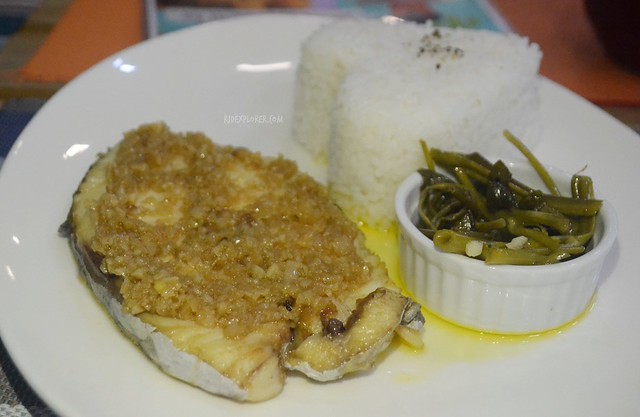 Refreshments are also a hit that are available in single, pitcher, and mega pitcher servings. Desserts, especially the diggers; Gold and Double, are best recommended. I ordered Fish Be with You (Php170) which is delicately cooked fish in sunflower oil smothered with an irresistibly good blend of butter and garlic. The fish was served with heart-shaped rice and the water spinach siding drenched in sweet and sour dressing. For quencher, I had a Red-dy to Mingle (Php50), an iced-cold tea with a sweet and fruity hint of strawberry. (Gomez St., Tacloban City)

Just across Sto Niño Parish Church is another hangout place for students and young professional in Tacloban City. It was jam-packed the first time I visit the cafe with all the couches and high tables on both levels were occupied. And when I went back later in the evening to check, they were about to close. I was still accommodated though and was overwhelmed by the beverages available. 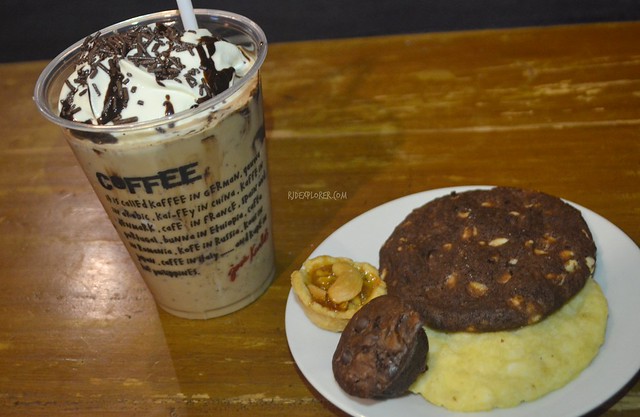 Right after I came back from Palo, I went directly to Canto Fresco’s branch in Burgos Street, they also have a branch in Tacloban City Convention Center. If Chew Love’s menu was filled with hearts, for Canto Fresco, a tiny dragon. Canto Fresco is part of the OneKitchen restaurants in Tacloban that includes Ayo Café, Sunzibar Restobar, Redsalt, Café Memento, and El Amigo. Options available are starters, bread and dips, sandwiches, thin-crust pizza, pasta, mains, and desserts. 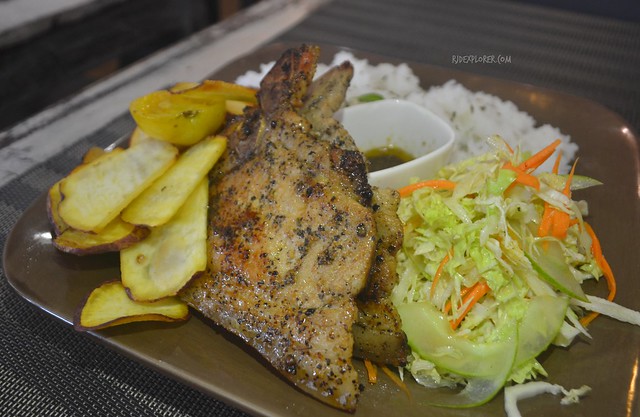 There were no customers except for me so they were avail to serve my order Pesto Pork Steak (Php275) in just 15 minutes. When a crew showed up from the kitchen, I was shocked by the humongous plate of Pesto Pork Steak he delivered on my table. It has two pieces of big pan-grilled chops oozing with their homemade pesto. The meat comes with more than a cup of rice, fried sweet potato chips, and a refreshing salad. It was late to find out that the menu has a disclaimer, “All our dishes are meant for sharing, but good enough for one hungry person.” I was able to chow down everything. (Burgos St., Tacloban City)

Time for some Mexican food in Tacloban and the best place for this cuisine is Mex’Em Up Grill. Their branch in SM Savemore is more of a fast food restaurant for me with the setup and layout of its interior. Crews will still approach you though to take your orders. Starters such as nachos and gambas were expected apart from the burritos, quesadilla, soft tacos, and fajitas. 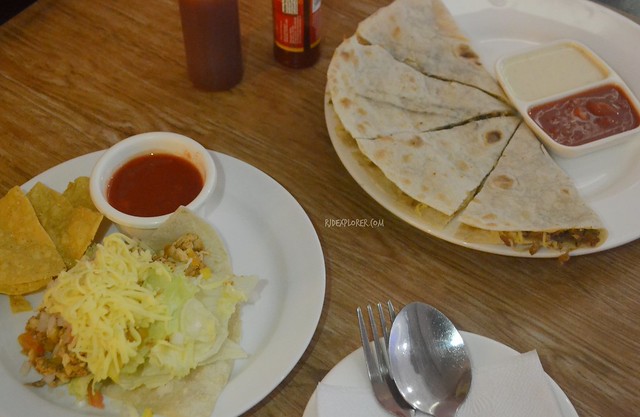 I had a difficult time picking what to order so I just randomly stated Soft Taco Marinated Chicken (Php70) and Cheese Beef Quesadilla (Php85). I was starving when I went out of the hotel and started my Sunday night food trip in Tacloban City. Serving size was just normal but really satisfying. 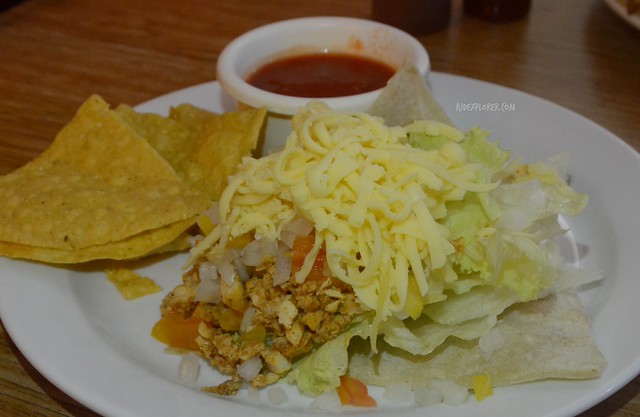 The soft taco, with chips on the side, was served with the layers of soft tacos covered with lettuce, tomatoes, onions, meat, and cheese; a different way from the usually wrapped meal. Quesadilla was normal but the tomato salsa and garlic mayo really made it so flavorful. (SM Savemore Justice Romualdez St., Tacloban City)

I continued my evening food tour in Tacloban City by traversing one of the streets going to Burgos Street. My next target was Libro Atbp Bookstore and Coffee. I took a right turn on a dark alley and saw a restaurant glowing from the shady road. Name was intriguing so I gave it a try and also a way for me to ask the exact location of Libro Atbp. 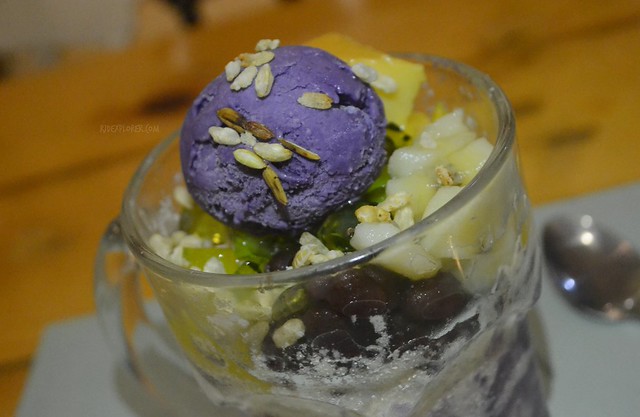 The restaurant has a very comfy vibe with all the mini pillows on the seats, some books, quotation on frames, and travel mementos. As the café’s name suggests, ironically, I ordered a Special Halo-halo Single (Php75). The cup was stuffed with a lot of creamy crushed ice and different sinkers like beans, banana, jelly, topped with a scoop of ube ice cream and leche flan drizzled with toasted rice. A great refreshment after a savory Mexican meal. (Zamora St., Tacloban City)

Libro Atbp was unfortunately closed on that Sunday evening and to get some dose of caffeine, I decided to drop by K Patisserie. The place is known for cupcakes, based on posts I see on Instagram, but it was surprising to see some do-it-yourself burger, all day breakfast, salads, and pasta on the menu. I was already bloated that time and trying one item on those mentioned categories will worsen the feeling. I decided to get a cup of brewed coffee. 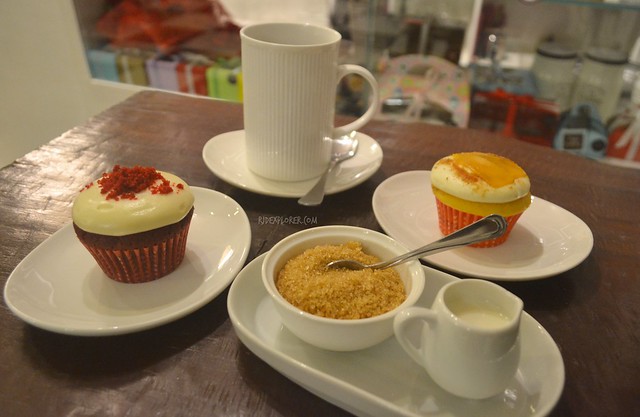 While paying my coffee on their booth, I was enticed by the colorful cupcakes dazed by creams drizzled with magical dust. I surrendered in ordering two: red velvet and mango float, worth Php55 each. The strong aroma of the coffee lessened the overstuffed feeling and this made me demolished the colorful cupcakes. Cupcakes were not that sweet and I love how the owner created the mango float, converting the normal dessert into its cupcake version. (Paterno St., Tacloban City)

Last restaurant I was able to try was a newcomer in Burgos Street known with the #POUKI hashtag, Pop Up Kitchen. The restaurant’s sign on its vibrant façade will make you check what in store for their diners. The interiors, though not that large, is striking with paintings on the wall and metal plate numbers used to decorate the lighting fixtures. 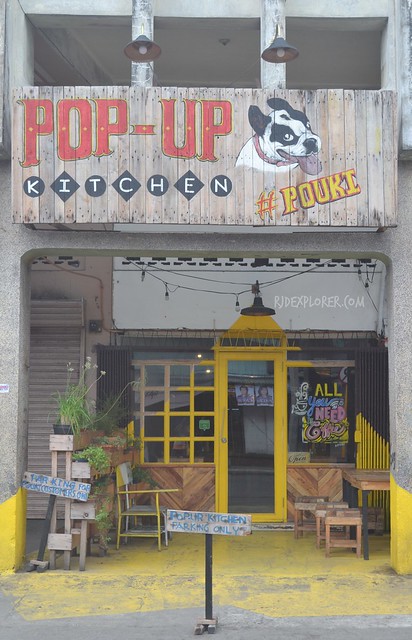 One side of their artsy menu was occupied by the main courses they offer: herbed pork belly, lemon butter pork chop, roasted chicken, chicken wings, herbed grilled chicken, Italian spaghetti, and some beverages. The other side presents their Pop-Up Burgers from classic, cheese, bacon mushroom melt, mushroom caramelized, and Wasabi burger. I even saw veggie, avocado, and mango salsa burger. 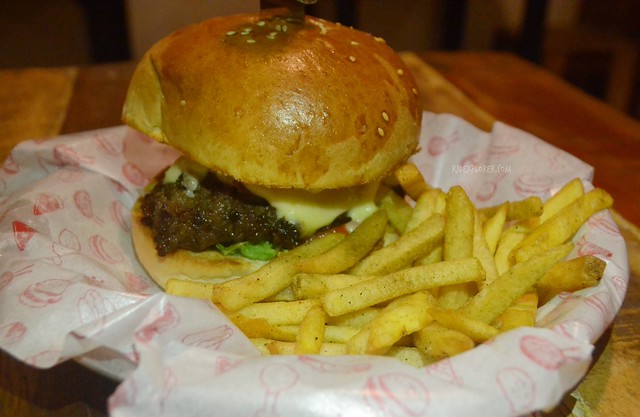 Out of curiosity, I ordered Wasabi Burger (Php200) that comes with chips of fries. Buns were toasted with herbed butter, has homemade pure beef patty, cheddar cheese, veggies, homemade mayo, and a dash of Wasabi sauce. You can choose from 1-10 on how hot you want your burger, and I only opted for a 5. Burger was not that hot and Wasabi somehow gave a remarkable flavor on the juiciness of the burger. (Burgos St., Tacloban City)

I wanted to try more restaurants but a day on my visit required all stores to close due to power interruption while some stores are closed on Sundays. A weekend of hopping from one café to another gave me the chance to be familiar with Tacloban’s food scene, aside from recognizing the resiliency of the people. Huge thanks go to all people of Tacloban who generously share their food escapades on social media because I really had a delightful experience.