The first local who approached me stated a Php500 rate for the visit to Dao Falls, Binalayan Falls, and Aguinid Falls. I sarcastically declined his offer because I thought it was too much. The Police Station is just a stone-throw away and I had the idea of asking help from them to search for a guide who can tour me around. Unfortunately, it was still closed at 6:30 in the morning.

I went back to the group of habal-habal drivers and tried to negotiate. Dao Falls is off from the route of the other two that was why they offered Php500 for the three. “What if Aguinid and Binalayan Falls only?” I asked. “Php200”, a local exclaimed.

To kick off my waterfall hopping activity in the south, I agreed and found myself enjoying the fresh morning breeze from the sea on this coastal municipality of Cebu. Binalayan Falls, or Hidden Falls, is located in Brgy Bonbon, Samboan.

We made our way on the other side of the road and by chance met the Barangay Captain on his way to the entrance booth to the falls. He greeted us and asked for the Php10 entrance fee. After handling the coin, we snaked through the narrow trails bordered by towering coconut trees and bushes of plants going to the falls.

I found later on that it is reachable from the highway but since I planned to visit all falls on that side of Cebu, getting a habal-habal was a great idea in mind to save time, and energy as well. The short trek led me to a picnic area with some cottages and somehow a natural pool where the water coming from the falls is being contained. 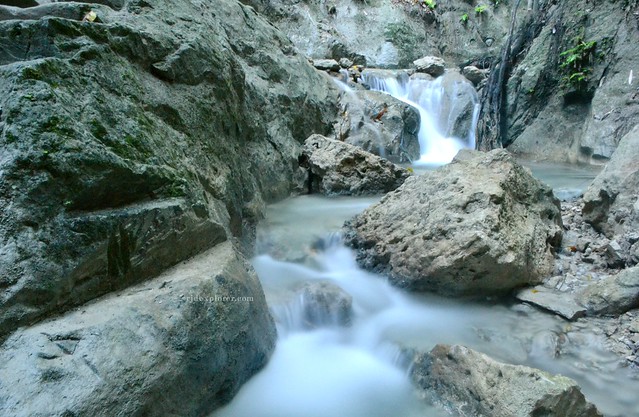 A falls, around 8-10 feet, is evident and flows into a basin, I have no idea how deep it is. At first I thought that it was the Hidden Falls but the guide climbed the cemented stairs on the side and led me to another eye-candy, the true Binalayan Falls.

The waterfall was tagged as such because it is indeed hidden. If it could tone down the sound of its cascading water, you will have no idea that a waterfall exists on that part. I was the first visitor on that day and I didn’t dare to swim.

Binalayan Falls has 3 columns with the water flowing directly into a catch basin. Since the area is a bit hidden, it’s a perfect spot for skinny dipping, that’s if you’re alone. On your visit to the falls, if the basin is crowded, since it’s not that big, you can just stay in the picnic area and enjoy the clear water coming from the waterfall. I didn’t stay in Binalayan Falls that long since my priority for the visit to Samboan is Aguinid Falls.

Here’s a compilation video of my visit to all waterfalls on the southwest side of Cebu, 7 waterfalls in a day.

Waterfall Hopping in Southern Cebu from RJ Abellera on Vimeo.