One of the things that make traveling exciting is boredom. Yes, you heard it right! Why? Because boredom will usually force you to find something to do, explore, and experience. I have scheduled that weekend to roam around the province of La Union. Since I enjoyed Urbiztondo beach of San Juan for the whole day of Saturday, I wanted to spend the next day on another municipality, Luna.

San Gabriel is a nearby town from San Juan and is known for numerous waterfalls, Tangadan Falls as the most famous one. But I had a problem with the way of going to the falls due to its inaccessibility. I just decided to visit another coastal town of La Union for that spare day, the municipality of Luna.

Based on readings, it has also a waterfall, a pebble beach, and a historical landmark. Luna was renamed to honor the famous Luna Brothers: General Antonio Luna and Spolarium painter Juan Luna; as their mother, Doña Laureana Novicio Luna, was a native of the town. A statue of Antonio Luna was also built in the town plaza as a tribute to this brave general.

Luna was once called Namacpacan, an Ilocano word for “one who feeds.” In fact, a wooden Marian image called Apo Baket Namacpacan can be found inside the Shrine of Our Lady Namacpacan/St. Catherine of Alexandria Parish that serves as a pilgrimage site for the faithful.

A 10-minute walk from the plaza will lead you to the pebble beach of Barangay Victoria. A famous historical landmark here is the ruins of an old Spanish watchtower locally called as Baluarte. With the coastline receded, major damage on the watchtower is evident. But as per the locals, the local government tried to preserve the structure by using some posts to support the tower.

The shore of the town, which the residents believe to be a gift from their patroness Our Lady of Namacpacan, serves as the main source of their living. They pick stones and classify it into gray, black, white, and seven-colors that will be sold to local traders that will bring the pebbles in Metro Manila and some parts of Luzon. Regular stones are priced at Php 12 per 20 kilograms as per the residents I’ve talked to and can go as high as Php 70 for the rare ones. 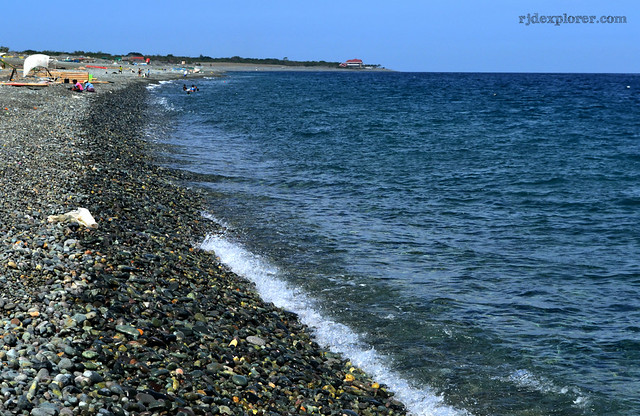 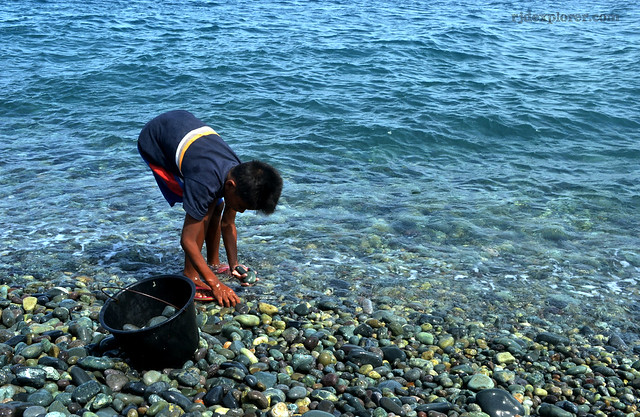 Pebble beach of Luna, La Union serves as a main source of living for the residents.

During my visit, kids were also helping their parents in pebble-picking while dipping in the clear water of the beach. A kid who was busy filling his bucket said that the money he will get from the sales of his pebbles will be used for his schooling this coming June.

The last attraction I have checked was the Occalong Falls located in the lush nature of Barangay Cabalitocan. From the plaza, I chartered a tricycle going to the falls at Php 200 for the roundtrip fare and waiting time. The falls is 20 minutes away from the town proper. Locals also flock the falls to cool down the summer heat. An entrance fee of Php 10 is being collected.

The falls is not that high but has a spacious basin that serves as a swimming area for the visitors. The rock, where the water cascades, is really astounding with its surface having some levels that add an effect on the gush of the water.

HOW TO GET TO LUNA, LA UNION

From San Fernando City, La Union, take a jeepney bound to Luna, La Union. Fare is Php 50 and travel time is around 45 minutes.
From San Juan, wait for ordinary/air-conditioned buses bound for Vigan, Candon or Laoag. Tell the bus attendant that you will be going to Luna and will drop at Balaoan (fare is Php 30). Tricycles going to Luna are available near 7Eleven, fare is Php 10.