Second day in Camiguin and we just wanted to lounge in Bahay Bakasyunan. I had the visit to the inland attractions the other day so it was time for the islets. Camiguin is only blessed with two other islands, White Island and Mantigue Island. Morning of that day was planned to visit the first. 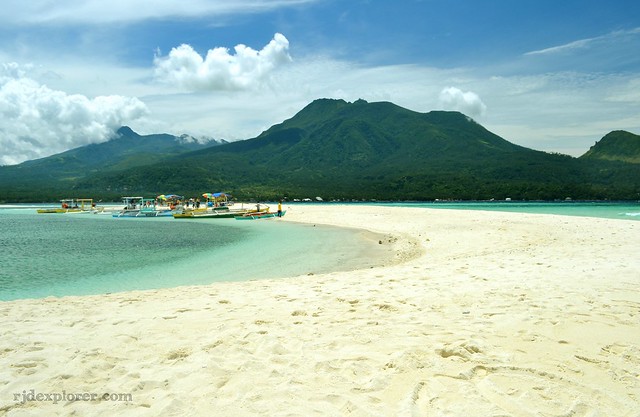 People will consider you a loser if you were not able to check it. From Mambajao Proper, you need to take a motorella ride to Barangay Yumbing where motorboats can bring you to the island. 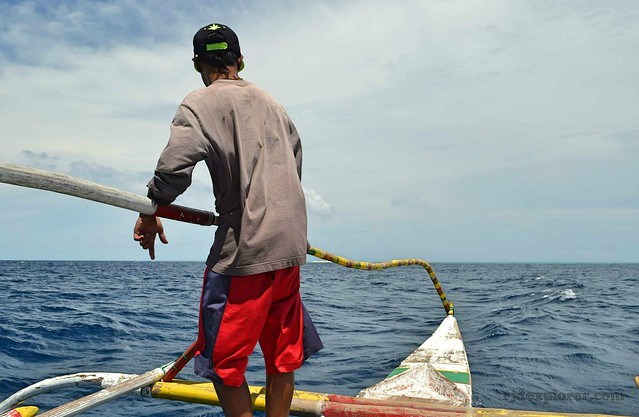 And since we enjoyed the morning vibe in BBC, we went out of the resort late and arrived in Yumbing around 10AM. The rate for the boat that can accommodate 6-8 people is Php 500. Environmental fee is not yet included. Locals will also try to offer you life-vest for another fee, but you can have it on the boat you will be chartering, for free.

I was informed that there is nothing so much to do on the island aside from, well, basking under the scorching heat of the sun. This means that skin will be a shade darker and I was prepared for it, minus the sunblock. 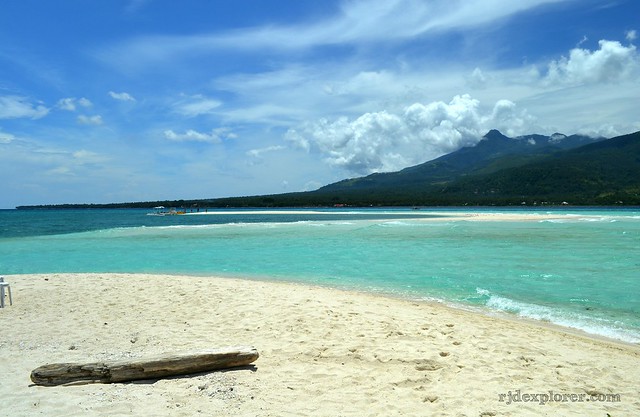 Micromatic umbrellas, the colorful, big sunshade being used by vendors, welcomed us as we approached the atoll. Literally welcomed us because of a local holding a piece, asked us if we were going to rent one. Head from side to side was the answer he got. 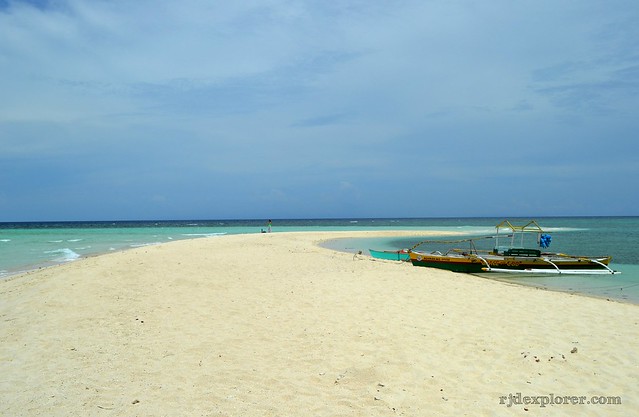 We wanted to feel the sun and getting one will hinder our skin to get some tan. With Mount Hibok-Hibok in the background, it’s a great opportunity to have the infamous jump shot. I am not really into jump shots but I didn’t want to be tagged as killjoy for not having one. So I tried, once. 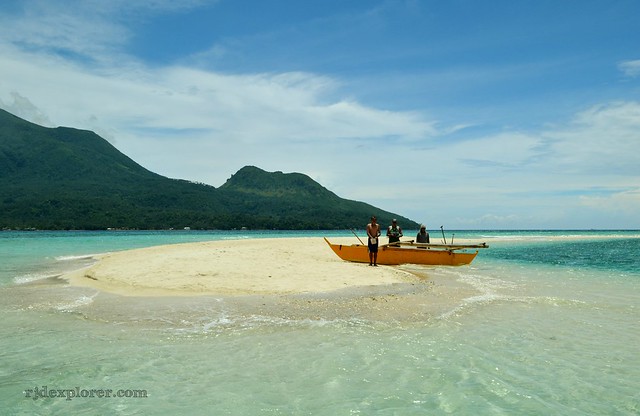 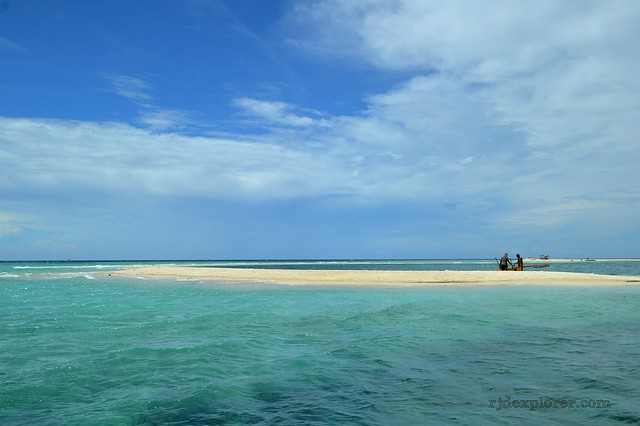 As I lazed under the heat of the sun, a local approached me and offered sea urchins. I declined the offer and just thanked him. I continued taking pictures of the crescent-shaped, bare island.

Foreigners on their dive suits were having a break from diving, under one of the tents. Just in case you missed to bring some food with you, there are vendors available. 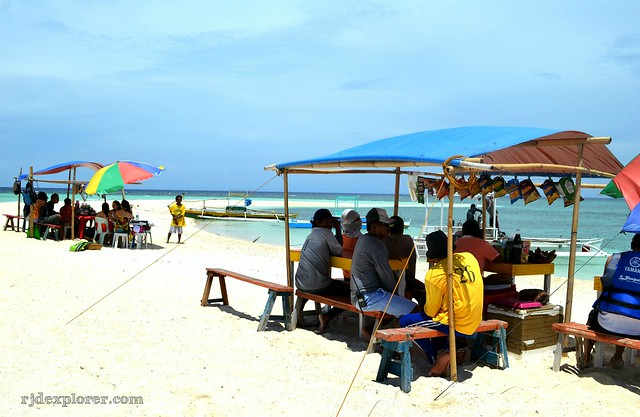 After a few clicks and more panoramic photos, I settled the camera on the tripod, got my snorkel gear, and plunged into the water. The water on the west side of the island is shallow but the waves are harder. The other side is completely opposite, waves are calm but water is 1 to 2 meters deep. 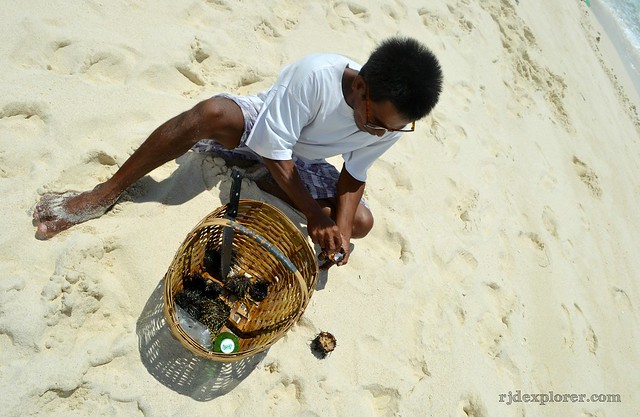 Another sea-urchin vendor was walking towards me as I moved out of the water. He offered me to try it. Out of curiosity, I inquired about the price, “3 for Php 50.” He started to scrape the star, in shape, orange thing inside the shell. He collected it in a half of the cover and told me that I can now eat it. He also handed me the bottle of vinegar and a disposable spoon. 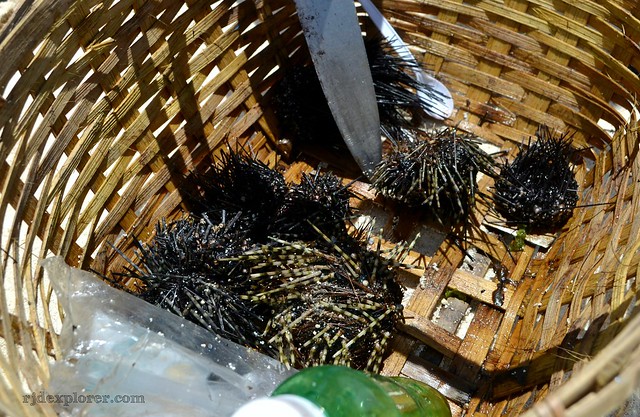 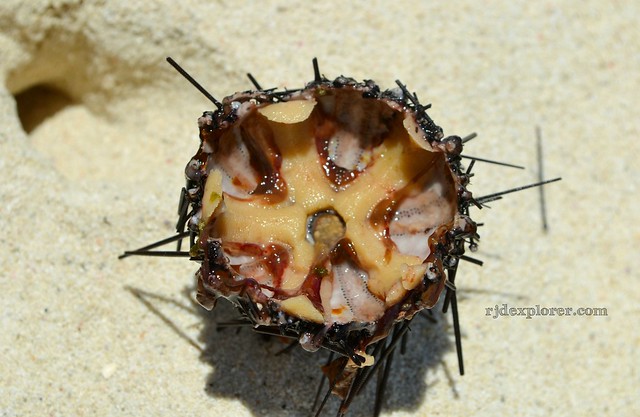 Poured a lot of vinegar, and I started to scoop the internals of the sea urchin. After the first try, I found it was delicious except for the “fishy” aftertaste. In 3 more scrapes, I emptied the content on the shell. I didn’t imagine that the creature that scares me for its spikes can also be a good option for snack. 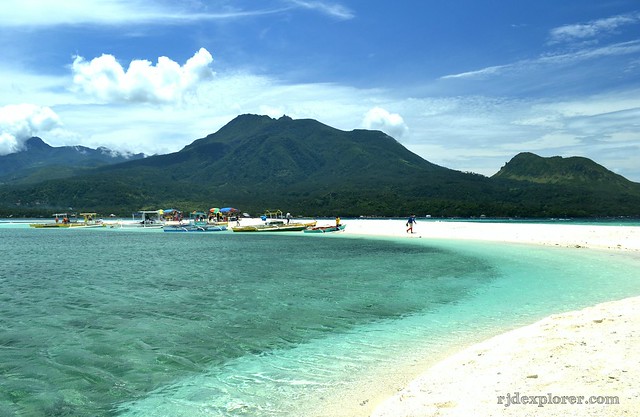 As we left White Island, I disproved the statement that the only thing that can be done on the island is to bask in the sun. In addition to this is a unique food experience by trying out some sea urchins, in my case, was my first time.